It’s a messy meal and rather time-consuming but oh, so good.  I start by chopping up the following vegetables:

Quickly stir fry the vegetables in hot oil (I use coconut oil), seasoning with soy sauce, ginger and Creole seasoning.  When crisp/tender, pour veggies back into the bowl and set aside. 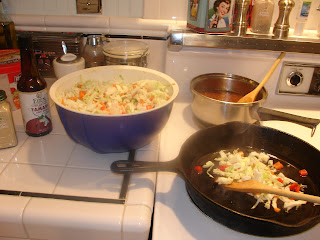 Next up, make the egg rolls.  I buy the egg roll wrappers at the grocery store.  The ingredients aren’t bad so I really don’t have any desire to try to make these myself.  The directions for rolling them are on the package.  I put about 1/3 cup of the stir-fried vegetable mixture on each wrapper and roll them up.  They can be fried but I usually bake mine.  I place them on an oiled cookie sheet, brush a little oil on each egg roll and then broil until browned. 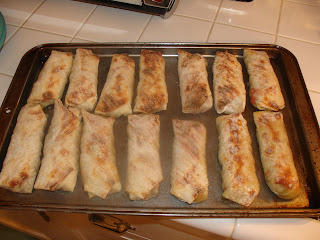 Meanwhile, add a bit more oil to the pan you cooked the vegetables in and then add pre-cooked, chilled rice.  Season with soy sauce, ginger, Creole seasoning and garlic powder.  Heat quickly, stirring and scraping the pan constantly.  Add the rest of the veggie mixture from the egg rolls (I make about double what I’ll need for the egg rolls).  Then add eggs – one per person – and quickly stir them into the rice, mixing well.  Cook just long enough to cook the eggs and then remove from heat. 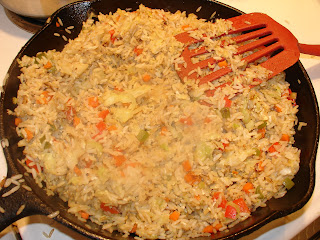 Mix together the following in a saucepan over medium high heat:

Heat to boiling while stirring, cook until thickened then keep warm.

Tonight I also served some fresh pineapple with the meal.  All three of us adore Chinese food but too often, what is served in restaurants is heavy and leaves us feeling a bit “yuck”.  This meal gives us the flavors we love but is a bit lighter.  It’s vegetarian food at it’s best, but meat-eaters can certainly add a bit of cooked meat to the egg rolls or some chunks of cooked chicken or shrimp to the sweet and sour sauce.  By the way, you may have noticed that I served egg drop soup despite the fact it’s made with chicken broth.  I happened to have a chicken carcass in the freezer (organic, free-range, humanely raised) from a few months ago before David and I began eating virtually entirely vegetarian.  I made broth out of it a couple of days ago and froze all but enough for the egg drop soup.  We aren’t 100% strict vegetarians (obviously!) and at some point we may go back to very occasional meat consumption.  In the meantime, because I had this chicken carcass, I chose to utilize it.