Before I tell you about this week’s Domestic Dee-Va project I want to show you the results of last week’s. If you haven’t seen the before pics, here is the link. It wasn’t easy but I managed to clear out two sections of the bookshelves for the stereo components and the albums. It was quite a job removing all the books and decorative items from each shelf, dusting everything and then putting them back in some semblance of order which probably only makes sense to me. I also catalogued the books on each shelf. 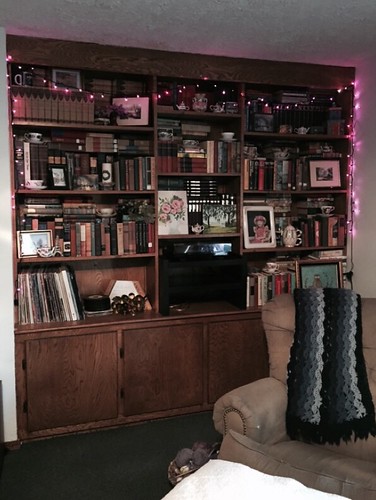 I have a small pile of books to get rid off but mostly I just reorganized and really filled up the bottom cabinets. 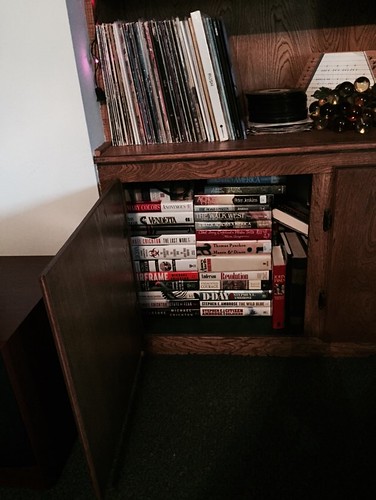 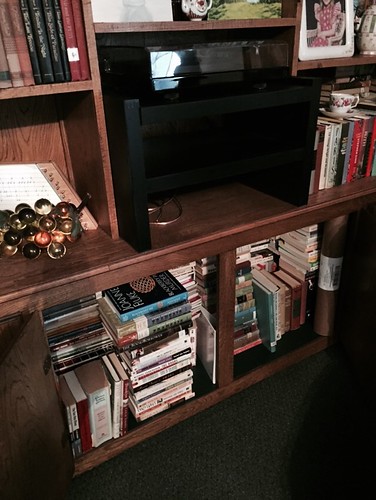 That tall object between the hanging guitar and the piano is one of the speakers. You can’t tell very well from the photo but the speaker housing is a really lovely cherry wood. And the sound is exquisite. 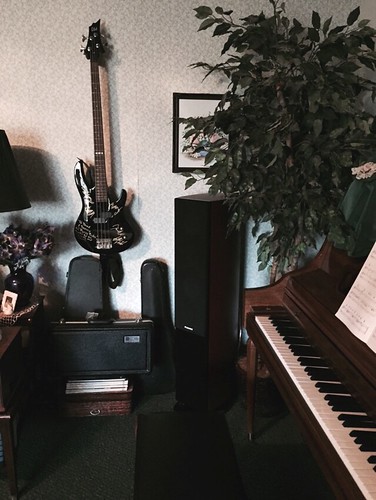 Here is a close up of the stereo components taken while playing an album. David built the shelf insert and the top section pulls out so you can open the dust cover on the turntable. He did an amazing job designing and building it.
We will be adding a CD player in the space between the turntable and receiver as soon as we decide which one we want. And just let me say, this stereo thing is one of the best ideas we’ve had. The music sounds absolutely amazing. I had forgotten just how rich and warm music sounds on an album played on a good system. It literally brought me to tears the first night we sat and listened. Now we will be seriously collecting vinyl. 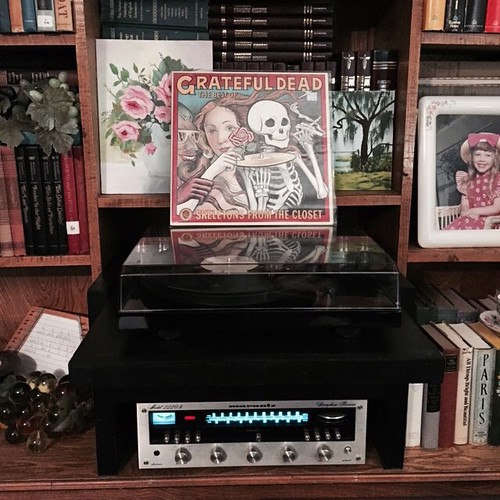 Okay, so that was last week’s project. This week I’m going to tackle the exercise room. It used to be our son’s room but now it houses our treadmill, exercise bicycle and weight machine. Unfortunately it tends to be a place to dump things we don’t know where to put.

That big box in this next photo has some sort of music equipment David bought for our business. I think it’s a subwoofer but I’m not sure. I asked him tonight if he’ll find another place for it and he said he will take it to the rehearsal studio for one of our bands (they have several pieces of sound equipment we’ve purchased there). Whatever. Just so it’s out of this room! Most of that other stuff you see are things we use at our Happyland Music Festival each May. I had it neatly stowed away beneath the drafting table but things keep getting pulled out to use for gigs. I’m going to ask David to pick up several large plastic storage containers for all this stuff and then take them over to the spare bedroom in our guest house where our son lives. That big lamp belongs to my parents. They let us use it in our family room years ago but we’ve since replaced the lamps in there and it got shifted to the exercise room. I’m going to ask if they want it back. If not, it’s being given away. You can’t see it in this photo but there is also an old television we don’t need which is also being offered up to anyone who wants it. My plan is to move my craft supplies in here and keep the drafting table free for projects. 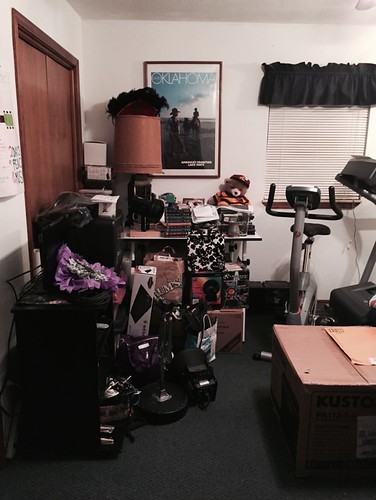 I’m also rethinking the need for this bed. A couple of times a year it might be used for a guest but our daughter’s old room has a double bed and is really a much nicer place for people to stay. It’s pretty rare that we need two guest rooms. I’m thinking that we could always rent a roll-away if we needed it. Well, that’s still to be decided. That huge black suitcase holds all our pirate gear. I’m going to clear a space for it in our big storage closet (another project for another week). And the box behind it has filters for our central heat and air system. David stuck them in here a few weeks ago but they really belong in our laundry room. 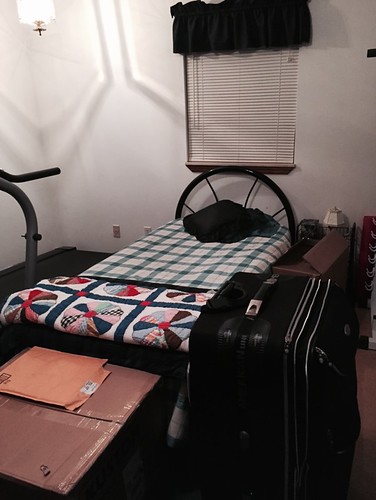 See all that stuff piled on the weight bench? It’s all washed and neatly folded but these are things people left behind last Happyland Music Fest. I’ll pack it all away in those storage boxes David is going to buy and then perhaps I will be motivated to actually use the weight bench again. 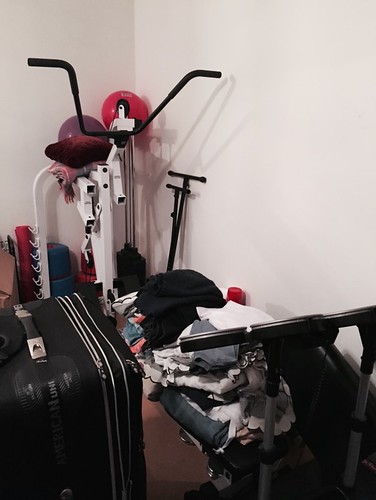 So that’s my project for the week. At some point I’d like to repaint the room, get wood blinds for the windows, some artwork for the walls, etc. But this week I just want to make it a functional workout room.