Last week was busy and lots of fun. First up…we celebrated our daughter’s birthday on Wednesday with dinner at a nice restaurant in a nearby town. David, Chris and I were there, along with our son-in-law, niece and her boyfriend. We had such a nice time together. 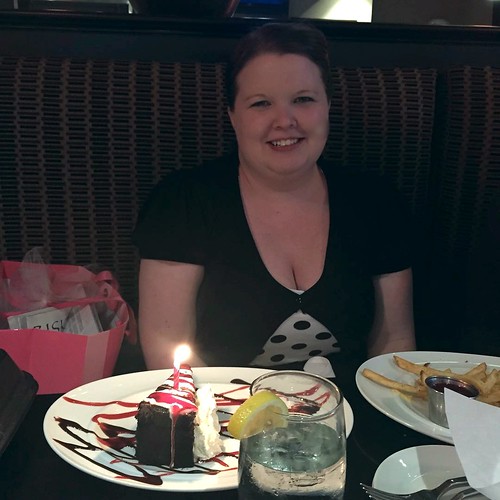 Our beautiful daughter
Thursday we went up to Oklahoma City to watch Our Mother’s Martyr’s show at the Blue Note. Shortly before we left I asked David if he thought there was any chance he would end up deciding that we should just get a hotel and spend the night. I had already made sure I had my meds in my purse but was considering throwing in some clothes, too. He thought about it a minute, realized we would be heading right back up there the next day and decided a hotel might be a good idea. I’m so smart. I threw some clothes and toiletries in a bag while he made a reservation. Turned out to be a very good idea because a pretty intense thunderstorm moved through and it would not have been fun to drive home in it.

The kids had decided that part of their Father’s Day gift to David would be to take him out to lunch and to a movie. We slept in a bit Friday morning and then met them at Scratch in Norman for a delicious lunch. They were all planning to see Terminator…totally not my thing. I opted for Magic Mike XXL. I hadn’t seen the first one and really didn’t have high expectations. However, it was the only other movie playing in one of the nice theaters. I’ve been wanting to check out the Directors Suite for a long time. It was fabulous! Reclining seats and they serve you anything you want right to your seat. We had just had a big meal and I was stuffed so I just had a drink. Next time I will make sure we haven’t eaten first. The menu is quite nice. And I was was pleasantly surprised by the movie. It was actually rather sweet in some ways.

After the movies were out, David dropped me off in front of Ulta so I could pick up some perfume and then we went to an electronics store to pick up a CD player component for our stereo system.

Saturday was the 4th of July and our niece invited us over for a cookout and to watch fireworks. There were about 15 of us. In addition to the hamburgers, hotdogs, salad, and potato salad (my contribution), Leslie put out this beautiful spread:

We ate and hung out in their backyard enjoying the seasonably cool weather. They live just a block away from the park where the fireworks are set off so we all grabbed a chair or a blanket, walked over there and found the perfect spot to watch. It was such a fun night!
Sunday evening we had the guys from Our Mother’s Martyr over. They brought pizza and the rough cut of their new album for us to listen to. It is spectacular! A little later, our niece and her boyfriend, Will, came out and he brought the band’s music video which he had just finished editing. We had seen part of it the night before but the band hadn’t seen it yet. It is truly impressive and we are all excited about what the future holds for these talented young men.

Shiloh loves to be right in the middle of things.

This week has been a lot quieter. I did volunteer about 5 hours on Tuesday at the local soup kitchen and David had a lengthy firefighter meeting Monday evening. One of his fellow firefighters came over Tuesday night and the three of us sat on the porch for a couple of hours chatting and enjoying the beautiful evening.
And speaking of beautiful: