It’s late and I’m tired but I realized I still haven’t shared our California pictures yet.  It was a quick trip but there were still some fun moments.  Here is the view from our hotel balcony: 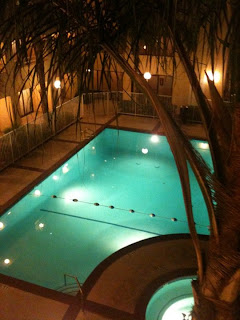 David finished up his work early enough on Friday that we decided to take advantage of the fact that we were only about 15 miles from the beach.  Believe it or not, neither of us had ever been to the Santa Monica Pier despite the fact that my mom and aunt grew up in Santa Monica and spent oodles of time there.  It was already dark by the time we got there so I wasn’t able to get any pictures of the ocean but I sure did enjoy hearing it.  We ate dinner at a little restaurant on the pier called Rusty’s.  We both had fish and chips which were rather yummy.  We then walked the length of the pier hand in hand.  It was getting cool so we bought lattés which we sipped while sitting on a bench overlooking the crashing waves.  It was one of those magical moments you really can’t plan.

Here’s a picture of the carousel on the pier: 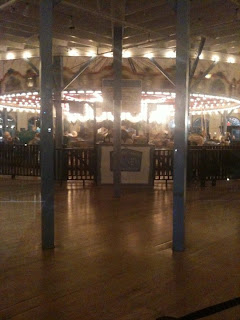 It’s hard to tell from this iPhone picture but this is the ferris wheel with lights reflecting in the ocean: 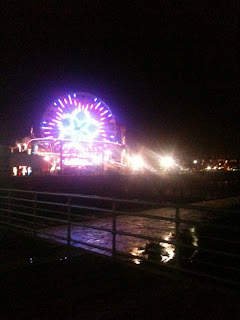 On Saturday we headed to the desert to visit with David’s childhood buddy, Ron.  I snapped this picture of palm trees and mountains with my phone from the car: 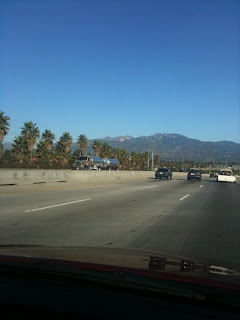 And this is the spot where David and I met.  Remind me to tell that story, okay? 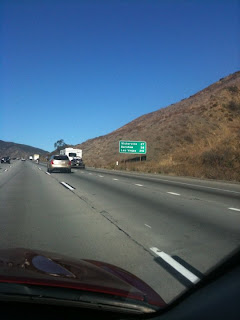 Okay, that’s all for tonight, folks.  Gotta get some sleep so I can get up in the morning and watch the Macy’s Thanksgiving Day Parade!