Last night I made chicken noodle soup for dinner and it turned out especially good. David raved about the flavor of the broth and he was right – it was really, really delicious. Now, I’ve certainly made chicken soup before and it’s always been good but last night’s was better. What made the difference? Well, it’s actually kind of funny. My usual method for making most soups starts with cooking some diced onion in a little butter. But since I’m doing a “slow month”, minimal shopping thing I’ve only got one onion left and I decided to save that for something I’m making later this week. I do, however, have a bag of organic minced onion which I bought from Azure Standard co-op: 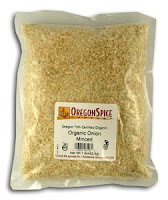 I “cheated” and started my soup by cooking some of this minced onion in butter, along with Creole seasoning, garlic salt, and pepper. I then added:

I sprinkled in about 2 teaspoons of flour and cooked a minute or so while stirring continuously. I then added enough water to fill the pot about 2/3 full and added two “Not Chick’n” cubes:
Most of the time I have some chicken broth/stock on hand, either homemade in the freezer or cartons of organic broth. I’m currently out of both, though.
I let the soup simmer until the veggies were tender and then added diced, cooked chicken (I had about half of a small, boneless piece of chicken left over from the other night) and fettucini noodles. I normally would have used egg noodles but this was what I had. Anyway, I continued to boil the soup until the noodles were done which took about 10 minutes.
As I said, the broth was absolutely delicious and since the only thing I did different was to use minced onion rather than fresh, I’m sure that was the “secret ingredient”. I’m not sure how to explain the flavor but it was richer and had just a hint of sweetness. So good! David and I each had two bowls and there was enough left for David’s lunch. As soon as I have room in the freezer I’m going to make a huge pot of this and freeze it in lunch-size portions.