You wanna know what we did Saturday night? Here’s a clue: 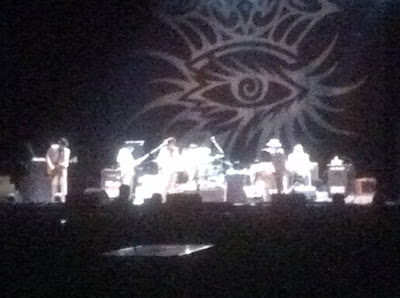 Yep, we went to the Bob Dylan concert at the Winstar Casino. When I heard he would be performing somewhere so close I knew this was an opportunity we shouldn’t pass up. And because David likes to indulge my whims, he got online and ordered tickets.

Bob Dylan is 70 years old – a year older than my mom. He’s been on The Never Ending Tour since 1988 and is still playing around 100 shows a year. I think that’s pretty incredible. Dylan’s contribution to and influence on music has been immense and legendary.  Hearing him perform felt like such an honor and I’m so glad we went.

We got there about 30 minutes early and took our seats.  Or what we *thought* were our seats. The concert venue really isn’t very well designed.  It’s basically a huge room with a stage.  It’s just a flat floor with chairs so visibility wasn’t very good.  However, about 45 minutes into the concert we found out that we were in the wrong seats.  The usher took us to ours and they were actually better.  Further away but on an elevated platform so we had a much better view.

One of my favorite things to do no matter where I am is to people-watch.  I told David afterward that I thought it was like there was this major cosmic force which had drawn every man in the area over 50 with a ponytail to this venue.  I’m so used to David being one of the few around here with long hair that it seemed almost odd to see so many in one location.  It was fun to see so many people our age and older (some MUCH older) thoroughly enjoying the music.

Dylan’s voice has deepened with age and his range has been diminished.  But his vocal quality has never been what anyone would consider traditionally melodic so I can’t say that these changes adversely affected my enjoyment of his performance.  My only real complaint was that the concert was way too short.  It was over in two hours, leaving the crowd begging for more, stomping and clapping and whistling.  It was SO totally worth the cost of the tickets.

David had reserved a hotel room for us so we wouldn’t have to drive all the way back home.  We stopped for a light meal at Denny’s which amused our daughter when she saw our Facebook check-in.  But she had misinterpreted our after-concert hunger.  This was the first concert I’ve been to where no one was smoking pot so  this wasn’t a case of the munchies due to second-hand exposure. 😉

I noticed several people taping portions of the concert and I found a few on YouTube this morning.  Here is a little snippet of Bob singing “Like a Rolling Stone”: