Nearly a year ago I reconnected with an old friend from high school via Facebook.  James was one of those people that everyone liked but he was more than just a nice person.  He was gentle, kind, and always smiling.  He had a way of making everyone feel special.  I don’t recall how it started but some of us began calling him Gandhi.  When we connected on Facebook he wrote the following note on my profile page:

Gandhi says hello, and increase the peace.  Do you remember?  I do. Thanks for the good times in Biology class.

I had started to mention the Gandhi thing myself but after 30 years I wasn’t sure he would remember.  I wish I could remember how it started but the important thing is that he was the type of person that deserved a nickname like that.

So why am I sharing all this about someone I haven’t seen in 30 years?  Sadly, James died a couple of days ago.  I’m just kicking myself for not attending our 30 year class reunion but it was Thanksgiving weekend and we had just been to California the week before (and New Orleans just before that) so we didn’t think we could justify another trip.  James spearheaded the reunion planning and even went so far as to help finance part of it in order to make it more affordable for those attending.  A friend shared that when he found out she couldn’t afford to make the trip to the reunion, he (and another kind soul from our class) offered to pay her way.  That’s just a small example of the kind of person he was.  Many classmates are sharing stories about how James helped them or did something special for them.

I don’t know a lot about his life after high school.  He did tell me that he had gone to law school and had been involved in helping the poor, elderly and disabled.  He also mentioned some “horrible racial experiences in Kansas”, but didn’t elaborate.  A few months ago I had posted a link on my Facebook page to a petition against some hateful, bigoted, racist activities.  James wrote the following:

Deanna, thank you.  I just read and sent a note supporting the actions against the people behaving like this towards other human beings.  Also, I am happy to know someone else from our class fights the good fight for other people.  Even though we may not personally have to deal with some of these issues.  It’s awesome to know you’re unselfish enough to know the hurt it can cause and fight against it.  Again, I thank you.  May  peace be with you and your husband, and may true love’s light always guide your path.  Increase the peace…

Increase the peace.  That was how he signed everything.  That was who he was and what he did.  He was truly a shining star, kind and honorable, generous and good.  He was what we should all aspire to be.  James touched my life many years ago and again briefly this past year.  He will be mourned by all who were fortunate enough to have known him but I know he wouldn’t want us to grieve for long.  I feel certain he would tell us that the best way to honor his memory is to allow our hearts to be as full of love as his was, to treat all with respect, to fight for the oppressed and those without a voice, and to do everything within our power to “increase the peace”.  R.I.P. dear James.  Your life was an inspiration. 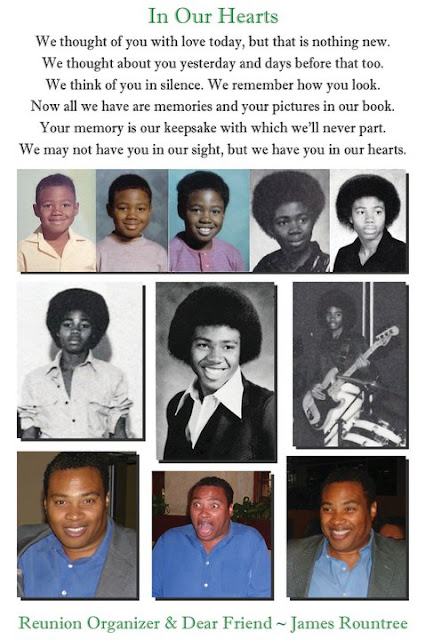 *One of our classmates made the page above to be included in the reunion memory book.
The photo in the middle is the way I’ll always remember James.