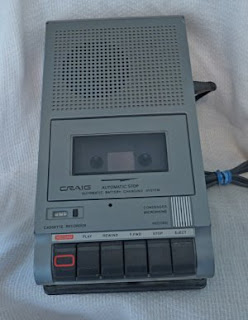 My son’s Facebook status today was about cassette tapes and the death of the Sony Walkman.  In the comments that followed were reminiscences of making mix tapes for friends and taping from a record player.  It brought back memories of sitting by the radio with a tape recorder much like the one in the picture above, just waiting for a favorite song.  You’d hold the microphone near the speakers, finger on the “record” button and as soon as the song started, you’d push the button.

When recording off the radio you had two options.  You could start to record as soon as a song began and then if it wasn’t the one you wanted, rewind and wait for the next.  Or you could play a version of “I can guess that song in three notes”.  In either case, you were likely to miss a bit of the song unless you were really quick.  And then there were the D.J.s who would often continue talking over the first bit of the music.  That was aggravating. Worse still were the times you’d have gotten a good start and were happily recording then the phone rang or someone ignored your closed bedroom door and came in talking.

As I think back on this I realize how much times have changed.  Not just in terms of technology but of the spending habits of teens.  Sure, we bought records back then.  And I loved singles because they weren’t that expensive and you could get just the song you wanted.  But no one I knew back then spent a fraction of the amount of money on music that kids do these days.  Most of us didn’t seem to have all that much disposable income, for one thing.  So we listened to FM radio a lot and when we turned 16, if we were lucky enough to have our own car, we bought a tape or two now and then.

David and I both drove 1966 Mustangs in high school.  We initially had 8-track tape decks but that was about the time cassettes took over so we soon switched.  I didn’t have a job other than occasional babysitting and I often did that for free so I rarely bought any tapes myself.  David, on the other hand, worked after school every day for my dad so he had a little money.   Since most of our free time was spent together we were usually in his car and I listened to his music.  I specifically remember the Beach Boys, Beatles, Journey, AC/DC, Kansas, Chicago, Queen, Doobie Brothers and one of my favorites – Steely Dan.

Going from tapes recorded from the radio to commercially produced tapes was almost a rite of passage for teenagers in those days yet there remains a bit of nostalgia for those old, personally recorded tapes of our favorite songs.  In fact, I still have this: 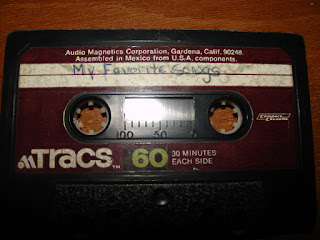 Note: The cassette player/record in the photo at the top of this post is for sale here.  No, it’s not mine.