I know, I know.  I promised stories and pictures of our recent trip to New Orleans.  And I do intend to follow through but life has been nuts.  Two days after returning from NOLA we zipped off to California for five days.  David had to go on business and took me along.  And if that weren’t enough traveling, we are going to Tulsa Sunday for an early Thanksgiving meal with my brother and his family, then to Joplin, Missouri from there in order to attend a funeral on Monday.  After that I just might become a hermit for the month of December.
I still haven’t uploaded all the pictures from David’s camera (having connection *issues*) so there will be lots more to come but here are a few for now.
A couple of months before our trip David started throwing out ideas for our Halloween costumes.  After such stellar suggestions as both of us dressing as Oompah Loompahs or him going as a French maid, I was ready to eagerly accept his plan to dress up as Dr. Feelgood with me as his nurse.  Hey, at least scrubs are comfortable.
Of course, Dr. Feelgood needed some “medicine” to hand out to friends.  He ordered syringes online and then spent a couple of hours making jello shots in our condo. 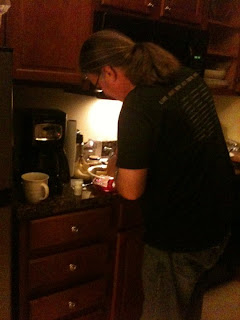 He made 100 of them because we certainly wouldn’t want to run out, right?
The finished product: 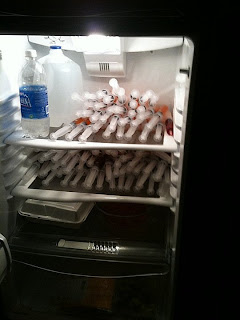 Dr. Feelgood was rather popular, as you might suspect.
He also had a prescription bottle which he filled with Smarties candies.
Dr. Feelgood: 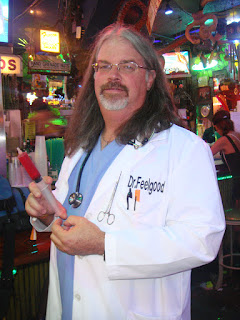 Halloween in New Orleans is quite a kick.  Some of the costumes were incredibly clever or elaborate.  Others?  Well, let’s just say that tightie-whities and a towel around one’s neck isn’t the sort of *costume* that just every man can pull off successfully.

A trip to New Orleans just wouldn’t be complete without at least one night spent with our pirate friends.  David arranged a pub crawl mid-week and about a dozen of us took part.  One of the cool things about being a pirate (or wench) is that the bars are delighted to have us stop in and will happily fill our own tankards rather than the usual plastic cups.  See?  Even pirates can be “green”.  Plus, you can carry your mug from bar to bar without having to purchase a drink in each place.  Good thing since I think we hit eight or nine bars that night.  And if you’ll promise not to tell, I’ll share my little secret.  You can even drink water from a pirate tankard.  Shhh!

Captain Dave Blackheart and his wench: 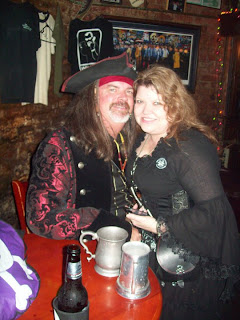 Jay and Dave, a dangerous duo: 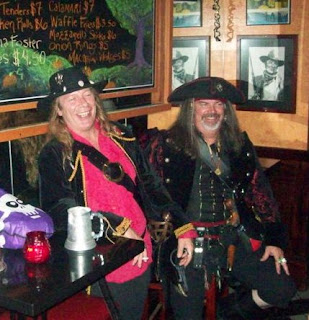 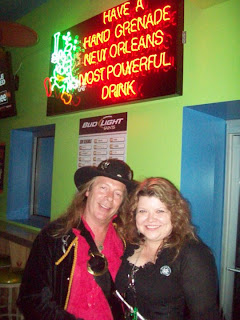 The NOLA Krewe of Pirate Wenches: 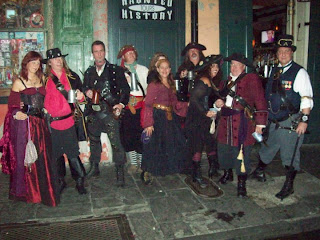 There’s nothing quite like roaming the Quarter with a motley crew of pirates and wenches.  But you have to be careful or you just might find yourself being abducted and taken into The Dungeon leaving your own pirate to wonder where you went.

Tune in tomorrow for more about our trip to New Orleans!