We seem to be taking that sentiment to heart around here. Friday evening was the first round of “Ada’s Got Talent”, the big annual fundraiser for Ada Homeless Services (I serve on the board of directors.). We had 43 acts that first night. The talent was incredible and it was truly an entertaining evening. It lasted until almost 11:30 p.m. and if we had good sense we’d have gone home at that point. However…
Instead, we decided to catch a bit of live music at The Statesman Lounge. Our friend, Mandala, was performing and we always enjoy listening to her music. As I recall, we got to bed around 2 a.m.
Saturday afternoon my cousin’s daughter was getting married and I had to go to town to pick up her gift. While there I tried to find something new to wear to the wedding but didn’t see anything I liked. Well, other than a pair of earrings. We can always use a new pair of earrings, right? I rushed back home, did a quick pedicure, ironed my dress and got ready for the 3 p.m. wedding. We picked up our daughter who attended with us.
I can’t believe I didn’t get any pictures and there aren’t any good ones on Facebook yet for me to share. It was lovely, though, and the bride was gorgeous in the remodeled dress which had originally been worn by the bride’s great-grandmother. It was also worn by the bride’s grandmother and an aunt. She wrote a beautiful story of the dress which was included in the wedding programs.

The groom is part of a family which already had ties to our own. His aunt is married to one of my cousins and the families have long been close. In fact, David made the comment that the wedding felt more like a family reunion. It was wonderful to visit with family and close family friends at the reception. Such a sweet way for the young couple to begin their lives together.

Afterwards we rushed home so David could take Shiloh for a walk and change clothes. Well, David changed. I stayed in my long dress but changed to more comfortable shoes. We then met my parents in town for dinner. We had invited them to go to the finals of “Ada’s Got Talent” with us but they were exhausted and decided to go home after dinner.
We enjoyed watching the approximately 20 acts of the finals and held our breaths as they announced the grand prize winner. We were ecstatic over the choice. The young man who won had performed at our annual Happyland Music Fest in 2011 and I talked him into entering the show this year. He is a very talented singer, songwriter and musician who well deserved to win the grand prize. Congratulations, Wyas!

This time the show was over around 10:30 so of course when we heard that our friend, Aaron Oliver, was performing at The Statesman, we had to go. Hey, it was early! A number of other friends were there and we had an absolutely terrific night. Great music, good friends and a ridiculous amount of laughter. And another late night. I believe it was 3:05 a.m. the last time I checked the clock.
Of course, we had church the next morning so we couldn’t sleep in. I got a call from the head of the Worship Committee on which I serve letting me know that the a/c was out in the sanctuary so we would be having our worship service in the Westminster Fellowship Center instead. This required some flexibility on everyone’s part and I was glad that the liturgist I had arranged for happened to be Susan Paddack, an Oklahoma State Senator. Needless to say, she’s comfortable speaking to groups and used to situations which don’t go exactly according to plan. As a public speaker, she also knows how to project her voice which was rather helpful since we didn’t have microphones. It turned out to be a nice service and the sermon topic, “Breaking Loose”, seemed rather appropriate under the circumstances. I’ll have much more to say on that later. 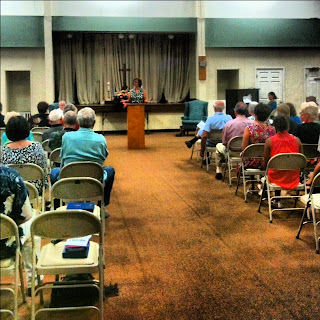 By the time we had gone out for lunch and picked up a 1/2 gallon of milk after church, we were both more than ready for a nap. We set the alarm for 2 hours so we wouldn’t sleep all afternoon and then not be able to go to sleep at night. We’ve played that game many a time. David got up when the alarm went off and played a computer game in our room but I continued to sleep. I would wake up momentarily and then go right back to sleep. Finally, at 6 p.m. David woke me. We ate dinner and watched the first two episodes of Downton Abbey. I had watched them Friday afternoon and thought David might enjoy the program, too. I certainly didn’t mind watching again and he did indeed enjoy the show. Guess we have a new series to watch together on Netflix.

You might think that my four hour nap would have made it hard for me to go to sleep but you would be wrong. I got in bed around 11:30, finished a chapter in the book I’m reading and promptly fell asleep. Obviously I was sleep-deprived. We got a phone call at around 4:30 a.m. and it took me about an hour to go back to sleep but then I slept soundly…until the alarm went off an hour later. Sigh…

Oh, well. We can sleep when we’re dead.