What can you say about a weekend like David and I just shared? Words can’t do it justice but I’ll give it a whirl. We drove to Oklahoma City Friday evening, stopping in Norman to drop off seven boxes of bottles (from Happyland Music Fest) at the recycling center. We then had dinner at Olive Garden. His mom had sent him a gift card for his birthday so we figured this was a good time to use it.

After checking in at the Skirvin we ran into Mike, the hotel limo driver, in the lobby. He came over to say hello. While we were chatting, Chris, the bartender, was walking across the lobby, spotted us and came over, too. He shook David’s hand and gave me a hug. It’s rather nice to stay at a place where the staff is so friendly.  They even remember our names.

We went up to our room and I was greeted by the intoxicating scent of gardenias. My amazing husband went to great lengths to obtain my favorite flowers for me. During the years we dated, he always bought gardenia corsages for me when we attended dances and proms. My wedding bouquet also contained gardenias. I wish you could smell them but pictures will have to do: 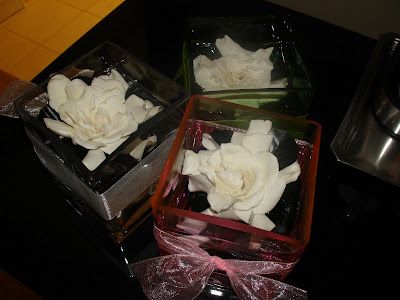 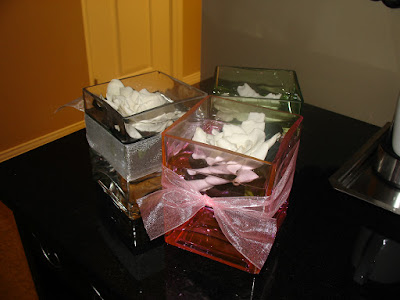 And then he handed me two beautifully wrapped little boxes.  I was totally blown away when I opened them and saw these: 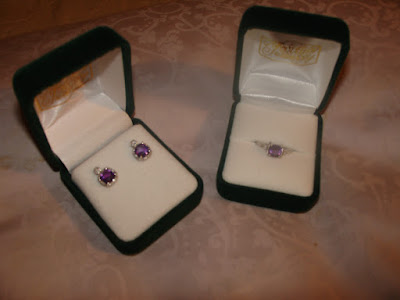 I’ve been talking about wanting amethysts recently and apparently he was listening.  He also had a couple of things from Victoria’s Secret but there aren’t any photos of those. 😉

I didn’t take too many pictures this weekend but here’s a shot of the room: 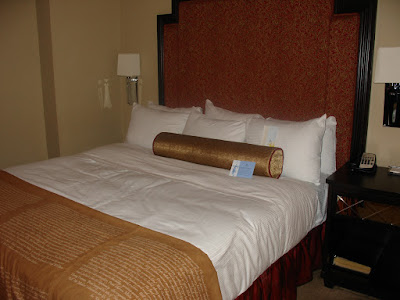 After we got settled, I changed from my jeans to a skirt and heels then we went downstairs to the Red Piano Lounge.  My favorite cocktail is a cosmo but only if it’s made *just right*.  I don’t even bother to order them at most places but Chris is a fantastic bartender and this is one place where I know I won’t be disappointed.  We sat at the bar and chatted with Chris until nearly 2 a.m. 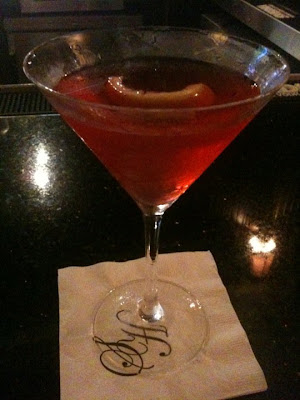 David ordered room service for breakfast the next morning.  Not shown here is the perfect cup of Earl Grey tea he made for  me.  By the time food gets delivered, tea just isn’t very hot so David bought an inexpensive electric kettle for this trip, made my tea himself and brought it to me in bed.  What a guy! 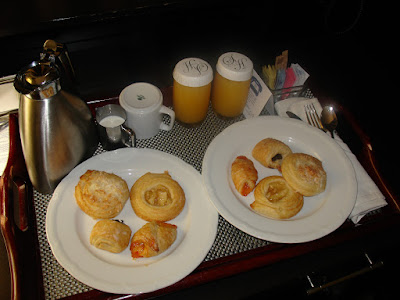 We didn’t even leave the hotel on Saturday.  We lounged around in our room watching television, eating room service for breakfast and lunch, and napping.  We ate lunch so late that we weren’t hungry for dinner until after the hotel restaurant was closed.  I think it was about 10:30 p.m. when we finally went downstairs.  Fortunately they serve food at the bar.  David ordered a pizza and I had a chicken sandwich with sweet potato fries.  Yum! 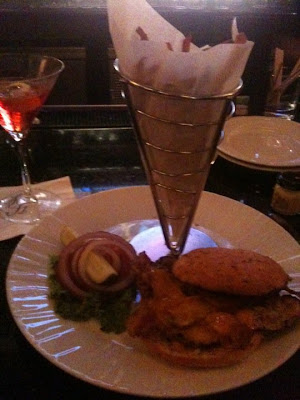 On Sunday, David asked if I’d like to see the movie, “Midnight in Paris”.  I’d been dying to see it but I was planning to go with friends because I didn’t think David would be interested in it.  But he’s such a sweetheart that he insisted on taking me himself.  We went to the beautiful Warren Theatre in Moore, someplace I’d been wanting to see.  The theatre is gorgeous and the movie was everything I had hoped it would be.  Even David enjoyed it and we are talking about a trip to Paris one of these days (a life-long dream of mine). 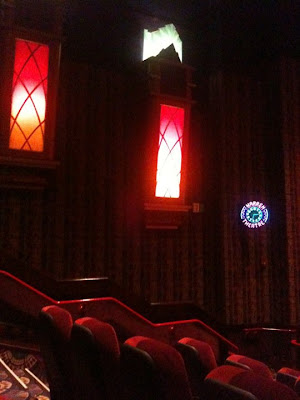 After the afternoon movie, we returned to the hotel and dressed for dinner.  There was a message on our room phone from the valet, Chuck.  Just before we left for the movie, David had talked to him about arranging for a cab to take him to the airport early Monday morning.  Chuck had left a message letting him know that the car would pick him up in front of the hotel at 5:40 a.m.  He then said to be sure to stop by the front desk because they had something for us.  This is what was waiting for us: 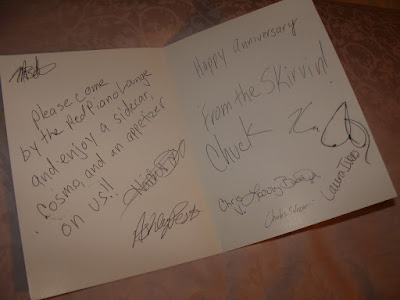 Do you see what it says on the left?  Chris, the bartender we know so well, doesn’t work on Sundays so I’m guessing they must have called him to find out what our favorite drinks are.  Isn’t that amazing?  It was fairly early (for us, anyway) so we went to the lounge for cocktails and an appetizer.  We chose the spinach and artichoke dip with tri-colored tortilla chips.  There were only a couple of other people in the bar so we got a chance to get acquainted with another bartender, Moe.  He’s from Morocco and speaks four languages.

We then went across the hotel lobby to the Park Avenue Grill for dinner.  They were out of the scallops which was my first choice (it was late and everyone had been ordering them all night) so I opted for the filet, as did David.  I generally don’t order steak very often but this was outstanding.  Following a lovely dinner during which David told me that it didn’t seem like it had been 30 years while at the same time feeling like we’d been together our whole lives, we went back to the lounge.  David had to be up really early so we didn’t stay too late. 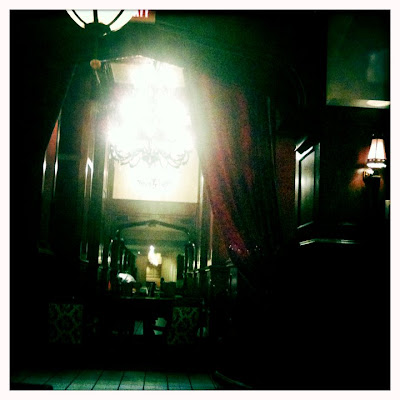 David left the room a little after 5:30 a.m. Monday morning to catch a flight to Houston.  I hated to see him go and he hated to leave but after such an amazing weekend with the love of my life, I could hardly complain.  I finally managed to go back to sleep for a little while.  When I woke around 9:15 a.m. I made myself a cup of tea and read the paper in bed.  I checked out of the hotel at noon and then met my good friend, Roz, at Kaiser’s for lunch.  An almost four hour lunch!  I’ve missed her since she moved to the city and we had a lot of catching up to do.  Oh, who am I kidding?  We could see one another once a week and still manage to find enough to talk about for four hours.

So, that was how we spent our anniversary weekend.  I simply could not ask for a better husband.  David, I love you more than words can say and after all these years, I’m still in love with you: