Do you wear perfume? If so, do you like to wear several different perfumes or do you have a signature scent?

Ever since I was about 16 years old I’ve worn Shalimar perfume. Oh, I’ve had a few brief flirtations with a handful of other fragrances. L’Heure Bleu, Paloma Picasso, Red, Giorgio… But I always come back to Shalimar and for the past couple of decades I’ve remained faithful.

To me, Shalimar smells warm, a little exotic, mysterious, sexy and yet classy. One of the top notes is bergamot which also happens to be in Earl Grey tea. When I realized that, it all made sense. I mentioned this fact to my daughter and she said she’d always thought Shalimar smelled like Earl Grey tea. Apparently I’m consistent in this regard.

I wear Shalimar every day and people compliment me on it all the time. David loves it, too, which is a good thing. So why did I decide to look for a new fragrance during our 2014 trip to Paris. Well, it’s like this…

Scent is extremely important to me. Like music, it evokes very strong feelings and memories. When I snuggle beneath freshly washed, Downy-scented sheets (especially if they are also line dried) I am, once again, a ten year old girl spending the night at Grandma’s house. A whiff of gardenia reminds me of late night drives home from visiting an aunt and uncle because they had a huge gardenia bush by their front door and always gave us a bloom as we left which my dad would tuck into the car visor. Neutrogena Rainbath shower gel whisks me back to our honeymoon in New Orleans where that was what our hotel provided. And while this one is a little less romantic, I love the smell of Pine-Sol because that is what my mom used and it just says, “clean” to me.

A couple of years ago I got this idea. I would search out a second perfume and only wear it when I am alone with David. It would be something private between the two of us. On one of our trips to New Orleans I spent some time in a  perfume shop smelling all the fragrances. I thought it would be especially nice to buy something there because the scent would also remind me of my favorite city. I found a couple of possibilities but an hour or so after trying them on I didn’t like either very well. I had pretty much given up on this plan of mine.

And then David told me he was taking me to Paris. Paris – famous for fine perfume! In fact, Shalimar is made by Guerlain, a French perfume company. It also makes L’Heure Bleue, one of those I mentioned above. I decided I would try to find another fragrance on our trip. Bonus – it would always remind me of Paris!

Late one afternoon toward the end of our trip, David and I walked almost a mile to the Guerlain perfume shop I had spotted on our bus tour around the city. A doorman greeted us as we entered an all-white room which smelled heavenly. We were the only customers and I must admit, the whole experience was just a bit intimidating. One by one I picked up the testers. With most I knew from the first whiff they weren’t for me. I tried a few of them on a tester strip only to eliminate most of those, too. I think I may have actually tried one on my wrist. David was right there with me, sniffing each possible choice. Finally he said simply, “I like Shalimar”. And that’s when I knew my search had ended. At least for now.

My wonderful husband then purchased a bottle of the real perfume for me. It’s hard to find anything but the eau de parfum or eau de toilet around here. I haven’t seen the “parfum” anywhere in years. Not only is the perfume longer lasting (and has a richer, deeper fragrance), it still comes in this gorgeous, iconic bottle: 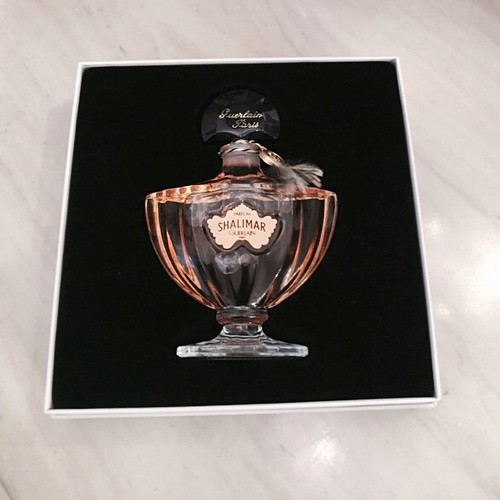 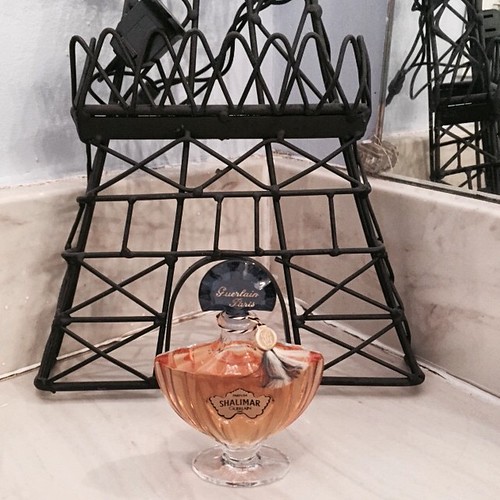 Isn’t that beautiful? The other formulations come in a bottle which was updated several years ago:

Pretty, and still reminiscent of the older bottle but I love the vintage look of the other, don’t you? Maybe someday I’ll find another perfume but for now Shalimar remains my signature scent.