Okay, so that post title is a little overly dramatic but I currently have eight men on my roof scraping off old shingles.  Perhaps that doesn’t sound like a big deal but for a “Highly Sensitive Person” the noise and vibration can be rather overwhelming.  I just might need to spend some time at the library but for now I’m coping by listening to The Beach Boys with David’s noise-canceling headphones.

So, how about an update on my “30 Day Challenge”?  I’d love to tell you that I’ve done something from my list every day but my mama taught me to always tell the truth.  I hope to do a few things from my list today since I can’t do my usual Tuesday household tasks (David has already walked mud into the house so there’s no point in vacuuming right now).  I did get one extra thing done yesterday, though.

Every Sunday our church has fresh flowers in the chancel.  Oftentimes, people will sign up to purchase them in honor or memory of someone and they will put a notice in the bulletin.  Sometimes no one signs up for them though so we have a little arrangement with another couple in church.  On Sundays with an even date they buy the flowers and we do so on the odd Sundays.  I must admit I’m always rather pleased when no one has signed up for the flowers on “our” Sundays.  Shh…don’t tell David. 😉  Anyway, this past Sunday was the 3rd so I have a lovely bouquet to enjoy this week.  Here’s a photo: 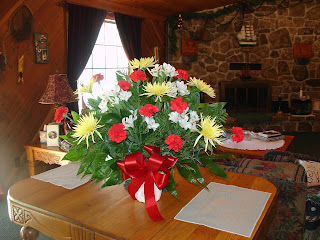 It’s hard to get the perspective from this photo but the bouquet is huge.  And while a stylized arrangement like this is perfect for the church, it’s a little too formal for home.  I like to rearrange the flowers and put them in my own vases.  I usually divide it up into two or three smaller arrangements.  I’ve been wanting to do a different decorative arrangement in my kitchen window and the color of these flowers is perfect in there.  Here’s what the window looked like before: 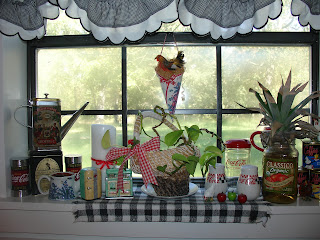 Yeah, it had gotten rather cluttered and needed bit of editing.  By the way, that’s a pineapple cutting I’m trying to root in that spaghetti sauce jar.  I had a few Perrier bottles I’d saved and I thought they would work as vases: 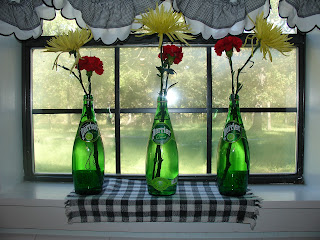 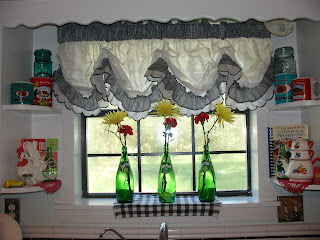 Oh, and that thing hanging down on the upper right?  Smoke detector.  Funny how you don’t see those things until you take a photo.  Don’t worry, we have a whole house security and smoke detection system so that one is superfluous.  Guess I’d better see about removing it.

And here’s the smaller arrangement of flowers in my own vase: 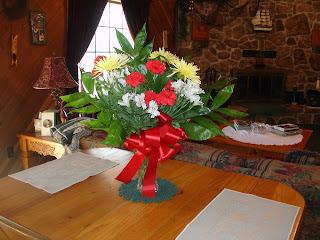 And now for a little lagniappe, here’s a photo of a small project I did a couple of weeks ago: 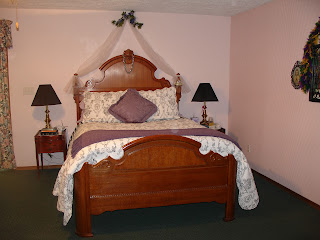 I’ve been wanting a little canopy-type arrangement on the wall behind our bed and it occurred to me that I could use some of the leftover tulle from Lisa’s wedding to fashion something like what I envisioned.  I already had the flowers, too.  Eventually I’d like to get some nice, sheer fabric which drapes better than tulle and come up with a better way to anchor it at the top but for now I think this is pretty.  And it was free.  Again with noticing things in pictures, I see that there are cords showing under David’s bedside table.  I had them wrapped up in an elastic band and tucked up behind the table but obviously they have fallen down.  Must take care of that!