I haven’t done one of these in ages. Seems like a good time to get back in the habit. Since it’s been so long, I’m going to include a bit from the last of June, too.

The last weekend of June we attended a wedding in Tulsa then spent the weekend there celebrating our 34th wedding anniversary which was the weekend before.


We’ve been busy but still made time for several nights of stargazing. Last night we took the telescope outside and looked at the blue moon. Shiloh likes to join us for these quiet evenings under the stars.

The House on First Street: My New Orleans Story  by Julia Reed

The Life-Changing Magic of Tidying Up: The Japanese Art of Decluttering and Organizing  by Marie Kondo

I bought the first two seasons of The Donna Reed Show for a little old-fashioned entertainment for myself but it turns out that David loves the show, too. Just so long as he doesn’t expect me to start wearing heels and pearls around the house!

We are also enjoying The Astronaut Wives Club. The history is interesting, of course, but I’m also loving the fashions and home decor.

The kids took David to see the new Terminator movie to celebrate Father’s Day. Absolutely not my thing so I watched Magic Mike XXL instead.

Last night we watched My Old Lady on Netflix. We both really enjoyed it.
Listening – Music and Podcasts

Our city has been hosting “Music in the Park” several Sunday evenings throughout the summer. I was asked to schedule the musicians. So far we’ve been able to attend two of these and really enjoyed them.

I don’t have any recipes or grocery hauls to share this time but I will next month. Promise! 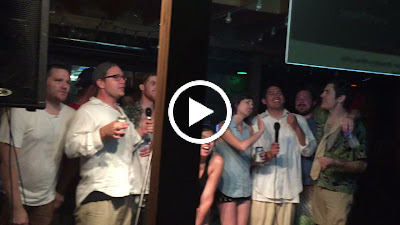 I think that about wraps things up for July. If you write “What I’m Into” posts I’d love for you to leave me a link in the comments so I can read yours. I’m linking up with What I’m Into on Leigh Kramer’s site.

Share on TwitterShare on FacebookShare on PinterestShare on LinkedInShare on Email
« French Friday – some fun resources
Menu Monday ~ August 3, 2015 »