Have you ever done something so utterly stupid that you hope no one finds out about it? Okay, we can probably all say yes to that one. But have you then proceeded to share it publicly? I didn’t even want to admit it to David but once I did I figured, what the heck, might as well share it with y’all, too.
So here’s the story. It was a dark and stormy night. Wait, wrong story. It was a dark and steamy Saturday night. I had spent a good part of the evening putting together the bulletin for a Monday morning funeral service at our church. Our church secretary isn’t in the office over the weekend and since I had done the church bulletins for about four months during a time between secretaries, I was asked to do this. Anyway, after I finished, I needed to do a few household chores because I was going to be out of town on Sunday and I also wanted a half hour or so before bed to read or maybe listen to some music. David had spent several hours in the heat dressed as a pirate helping with an American Legion fundraiser so he was exhausted and had gone to bed. Which is a shame because I obviously need supervision.
I was trying to hurry so I’d have time for the aforementioned reading/music listening. I tidied up downstairs, fed the cats and washed the dishes. I have a lovely little 6-inch cast iron skillet which is so perfectly seasoned that it is as good as any non-stick pan. I’m very careful about how I wash it and I always make sure it is thoroughly dry by placing it on a hot stove burner until all moisture has sizzled away. Remember that “sizzle” part because it’s important to this story.
After I finished the dishes, rinsed the sink and wiped down the counters, I went to put a little oil in my clean and dry skillet. Now, ordinarily I use a half sheet of paper towel, dipped in coconut oil to lightly grease a freshly washed and dried skillet. However, I had just used my last piece of paper towel (from the roll I bought about 4 years ago and which I keep tucked away in a cabinet – such a good eco-girl, I am) to drain taco shells the night before. So I figured I’d just pour a little olive oil in the pan instead of wiping on the solid-at-room-temperature coconut oil. And here is where I made my mistake. Failing to adequately estimate how long it takes a sizzling hot cast iron pan to cool, and lacking a paper towel to spread the oil, I…gee, I still can’t believe I did this…went to spread the oil with my fingertips. Yes, you read that right. And you know what? I discovered that there is this split second moment in which your brain is working ahead of your body. You know what you are about to do isn’t wise but it’s too late.
Here is the picture I took the next morning. See that big blister on my middle finger?: 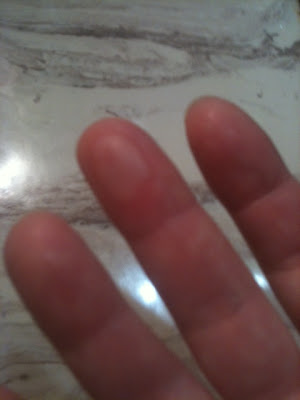 Now, part of the reason I’m sharing this is because I have a burn remedy protocol that might come in handy for you or someone you love. I have a long and tortured history with burns, starting with a couple of fairly severe ones from riding motorcycles as a kid and continuing to this day with kitchen accidents. Obviously. Here are the steps I took as soon as I realized what an idiot I am:
The following morning I debated whether or not to tell David what had transpired while he was snoozing peacefully. And at first I was a little vague about the precise details. But when you’ve been together 36 years I figure you really do owe it to one another to share ridiculous things like this. And would you like to know his first comment? “Were you drinking?” And that’s why I love him so. (Well, that and the sex.) Not only did he know how to make me laugh, but with that simple response he let me know that he considers me smart enough that I couldn’t possibly do something like that sober. The fact that he was wrong doesn’t negate the nice sentiment. Thank you, honey. And I’ll try to regain your trust in my intelligence.
Considering the degree of pain I had experienced the night before I was stunned by how little discomfort I was in the next morning. The middle finger, with the big blister, was still pretty tender but the other two fingers were only sensitive when touched. And today the blister has just about disappeared and the pain is completely gone. I’m typing this with no difficulty. So the important take-away from all this is basically:
Now it’s your turn. Share something stupid you’ve done so I can feel better about myself. Come on, you’re amongst friends (and the rest of the Internet, but don’t think about that).