Last week my daughter who blogs at Retrohousewife Goes Green shared a blog with me, Jen But Never Jenn. A couple of years ago Jen had undertaken a two-week experiment of living like a typical 1950s housewife. I spent the better part of two days reading all the entries (she ended up doing a second week of it, plus a “50s Housewife Does Christmas” series). I’ve read other blogs in which women do the 50s thing but this one was absolutely hilarious. After you read this post you simply MUST go read at least part of the entries. Oh, who am I kidding? Set aside a serious amount of time because you’ll end up reading them all.

Start by reading her post about keeping house 50s-style. I’m a relatively decent housekeeper, at least by today’s standards but as I read the daily housekeeping routine she had developed for her experiment I began to feel utterly inadequate. And exhausted. I did like two parts of it: Squeezing in a 10-30 minute nap and preparing a tray for pre-dinner cocktails. Because honestly? if I did everything on that list I would NEED a drink. But then I would most likely fall asleep before finishing the rest of the day’s work.

I’m not entirely certain whether the literature available on the subject truly reflects the activities of the average housewife of that era. I’m fairly certain shows like Leave it to Beaver and The Donna Reed Show were very much idealized versions of 50s home life. Or maybe they were accurate and I’m just a terrible slacker. But those women didn’t have the INTERNETS! or FACEBOOK! or PINTEREST! to waste spend quality time on. And really, without those what else was there to do but mop floors and make gelatin-based dishes?

As I read through the posts an idea began brewing. I’ve always had a fascination with that era. Ever since I was a child, my favorite show has been I Love Lucy. And when Nick at Night started I was thrilled to discover The Donna Reed Show. Nothing gives me the warm fuzzies quite like a Leave it to Beaver marathon or catching a few episodes of Father Knows Best. And obviously, anyone who designs and decorates a kitchen like this one:

…is going to entertain thoughts of giving that 50s housewife thing a try. Ever the romantic, I had visions of serving breakfast to my husband while wearing an adorable apron:

And I already mentioned the part about pre-dinner cocktails. In fact, due to the influence of Mad Men, several months ago I moved our most attractive liquor bottles to our library with every intention of occasionally pretending to be Samantha from Bewitched.

(So far it hasn’t happened yet, in part because I need an ice bucket, but mostly because I just never seem to think of it.)

I have the cookbooks for it: 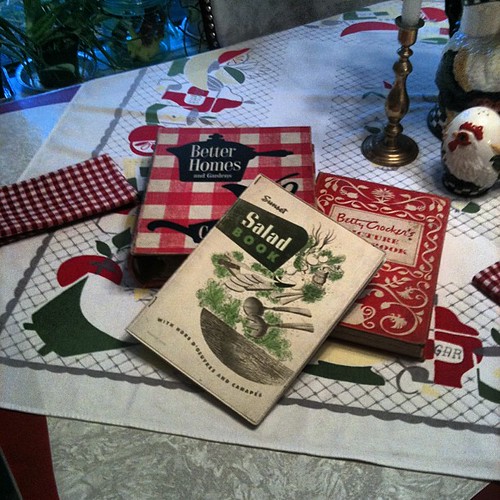 (And yes, that is a vintage tablecloth on a vintage table.)
I was certainly captivated by the notion of doing my own 50s Housewife Experiment. But then good sense prevailed and I decided to take just one or two aspects of it and implement them for awhile, then try something else. The gradual approach is more realistic at this point in my life. Besides, Jen already did this and wrote about it in an amusing manner that I certainly can’t improve upon.
So this week I decided to do something I actually used to do up until a few months ago. Monday morning while David was in the shower, I dragged my sleepy self out of bed, went downstairs and fixed his breakfast. Well, sort of. I didn’t cook anything but I made a fresh pot of coffee, set out a bowl and spoon for his cereal and poured him a glass of orange juice. While he was walking Shiloh I made his lunch (that’s something I normally do anyway). David was quite pleased by this. The next day was his birthday so of course I did it again. And again, he was very appreciative. Hmm…that’s when I began to feel guilty for having let this little part of my former routine slide. It’s not like I was slaving over a hot stove cooking sausage and eggs. Just a simple bowl of cereal, juice and coffee. Even a breakfast hater like myself can pull that off at 7 a.m.
The other thing I’m making more of an effort to do is to be downstairs to greet him when he gets home from work at night. That’s a little trickier because I never know when he’ll be here. He used to call me just before he left work which gave me about a 20 minute warning. He’s fallen out of that habit but perhaps he will reinstitute that if I make it worth his while. Perhaps that cocktail thing? Anyway, I’m going to work on that.
Update: Nope. Didn’t happen. Ha!