One of my friends on a Yahoo email group mentioned doing something she calls a “30 Day Blitz”.  Basically, she and her kids are devoting one hour a day for 30 days to getting caught up on some household tasks.  Several of us in the group thought this was a great idea and are planning to do our own version.

I don’t work outside the home and my kids are grown so I don’t really have trouble keeping up with the usual tidying up, laundry, cooking and that sort of thing.  However, there are drawers and cupboards and closets and seasonal chores which need attention in my house and I figure that this is the perfect time to tackle some of those.  We leave for New Orleans on October 29th so I’m starting my “30 Day Challenge” today.  When we return from our trip we will be well into November and the holiday season so it will be nice to have all these extra chores out of the way beforehand.

This morning I walked around the house with a notebook and pen, jotting down things that have been bugging me.  I selected 22 tasks I want to complete, trying to keep each to less than an hour.  For chores that will take significantly longer, I divided them up.  For instance, I chose six kitchen cabinets I want to re-organize, a day for each.  I didn’t write down 30 tasks for two reasons.  First, “life happens” and I know there will be a few days in which I won’t get one of these extra chores done.  Second, if I do really stay on task and complete all of these, I’m sure it won’t be any trouble to come up with additional chores.

I’m going to try to remember to take before and after photos.  Of course, I didn’t think of that until I had already pulled out most of the stuff in the first cabinet I cleaned out.  This is the cabinet in our kitchen where I store paper, plastic and garbage bags.  The kitchen trash can is to the right of this so it’s a handy place to also keep disinfectant spray.  I started using re-usable bags at the grocery store a few years ago and now I virtually never forget to take them in with me.  On the other hand, David and Chris occasionally will pick up something at a store so we still get a few bags now and then.  We no longer have an indoor cat so I don’t need them for the litterbox but Chris has one at his house so he does come get a few bags every now and then.  I started with this project because it was an easy one and it’s nice to get off to a good start.

Here is the “before” pic: 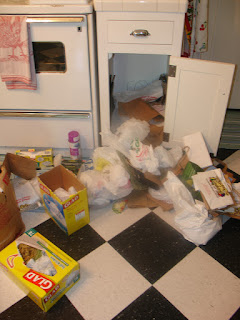 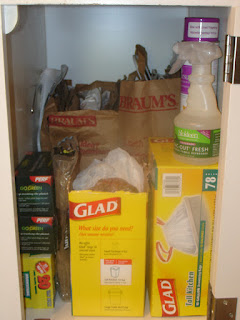 All the plastic grocery bags are in those two Glad boxes, while the paper sacks are in the back in the two Braum’s bags.  The little yellow box on the bottom left contains litterbox liner bags which I used years ago when we had a paralyzed kitty who needed a very shallow litter pan (literally, a cookie sheet inside one of these bags).  I’m not entirely certain why I still have them other than the fact I can’t bring myself to just throw away something perfectly good.  Maybe I’ll find someone who wants them.  Any takers?
So, Day One, Project One is complete and it feels good.  Anyone else want to join me in a similar project?