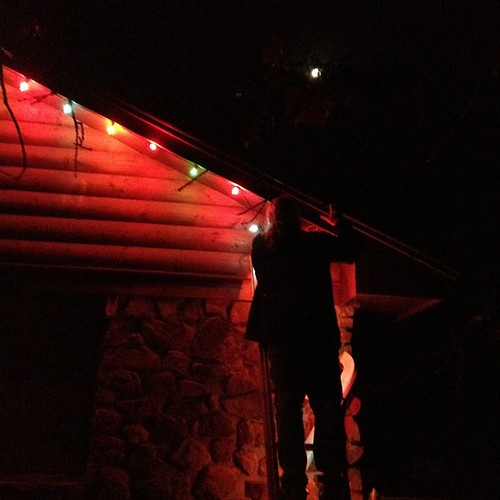 I adore Christmas lights. Back when we lived in town David put up white Christmas lights all around the roof, eaves, peaks and windows. He spent ages doing it for me, making sure each light was perfectly straight. It was gorgeous! Because the lights were white and the way he put them up they were barely noticeable during the day so we left them up year round.
When we moved to our current house way out in the country, David and I had different opinions about the importance of Christmas lights. I still wanted them but since we are completely surrounded by woods and no one would see them but us or the occasional visitor, he didn’t think it was worth climbing up on a VERY high roof to install them. I would periodically hint about how much I like Christmas lights but since I’m terrified of heights myself I certainly wasn’t going to push the issue.
We’ve lived here almost 15 years now and I had pretty much given up on having Christmas lights. David has been in the process of re-siding the upper story of the house and I figured when he got to the part where he replaces the highest peak on the front of the house that perhaps he’d install lights at the same time.
So imagine my surprise when he mentioned putting up lights for me the other day. He asked if I’d be okay with them not being as meticulously installed as the ones at our last house. I said I’d be happy with anything. He then asked if he could get the bigger, colored lights instead of the small, white ones we’d had before. Again, I said I’d be thrilled to have ANY lights. We also agreed to keep them down around the balcony rather than him climbing on the roof and hanging over the edge to install them on the front peak.
Yesterday he spent several hours hanging lights and now I have this: 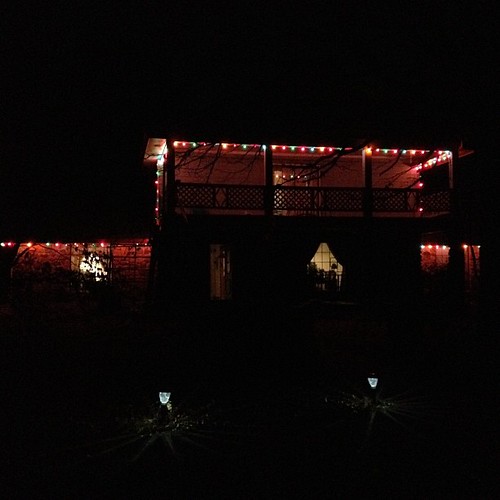