It’s been close to a week since I last posted here so a little catching up is in order. Friday night I came out of hibernation and we went out to dinner. Afterwards we went to hear our friend, Mandala, perform:

The guy playing drums on the ice bucket played soccer for David for many years and the one who came over to say hello at the end is a friend of Chris’ who has been living in Hawaii. Oh, and did you notice the container of cupcakes at the 52 second mark? A girl we know from our kids’ homeschooling days makes the most wonderful cupcakes and occasionally brings them to The Statesman to share. These were dark chocolate with cinnamon and a little cayenne – from scratch!- and were absolutely amazing. What? Doesn’t everyone get homemade cupcakes at a bar? It was a low-key evening but so nice to finally get out of the house.

On Saturday we took down the Christmas tree. Yes, it was still up with the Mardi Gras beads on it. I was a little sorry to put it away but it was time. That afternoon I cooked a big turkey dinner. If you follow my husband on Facebook you probably know the rest of that story but I’m keeping this post positive. I may share what happened later but not today. Suffice it to say that the experience served to illuminate someone’s character and bring to a close a long and painful situation.

As difficult as Saturday night was, the rest of the long weekend served to remind me how much we are loved and how very blessed we are by the people in our lives. We went to church Sunday morning and two people who had seen David’s Facebook post about Saturday night went out of their way to hug me and remind me that I had done the right thing and that sometimes you just have to let go of the bitter, angry people in your life.

David was off work Monday for Presidents Day. By the way, have you noticed the dearth of holiday decorations for Presidents Day? Anyway, that afternoon we had a visit from Daniel, our “other son”, along with his girlfriend and baby. Back when Chris was in college Daniel asked if he could live in our guest house with Chris “for the summer”. The dorms close for the summer and he didn’t want to give up his job at the bank. That was fine with us. Well, that summer stretched into 3 or 4 years and we truly came to consider him part of the family. He moved to Oregon a few years ago and we’ve missed him terribly (he’s been back once before for a visit but it’s been quite awhile).

Lisa came over and Chris and Kadi got back from their weekend trip to Dallas (celebrated their one year anniversary!) in time. We all had such a great time catching up, getting acquainted with Daniel’s girlfriend and enjoying this little guy: 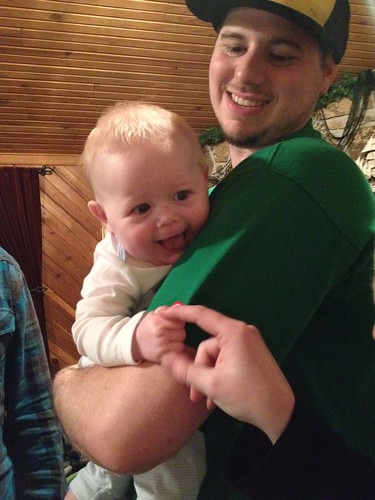 I’ll tell you straight up – he is the cutest, sweetest, happiest baby I think I’ve ever seen. I got to hold him a good portion of the evening and if you know me at all you’ll know how happy that made me. Since they didn’t have any specific plans I asked them if they’d like to stay for dinner. I had leftover turkey and broth from boiling the carcass so I whipped up a big pot of turkey and dumplings, plus a salad. I can nearly always pull together a meal at the last minute.

We were sorry to see them go but for a few hours at least I had all my kiddos together. Well, except our son-in-law, Justin. He was getting over a cold and didn’t think he should risk exposing all of us.

You’d have thought they color-coordinated on purpose: 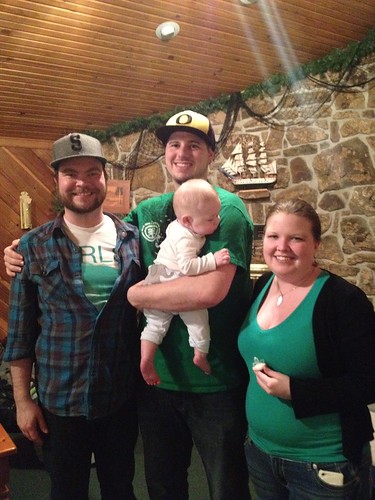 Last night we went out to dinner with David’s boss and one of the company salesmen who were in town. We had a nice time and it was still pretty warm when we got home. I wasn’t even wearing a coat. Early this morning while David was out walking Shiloh I got up to go the bathroom. I glanced out the sliding glass door that opens from our bedroom out onto the balcony and did a double-take. This is what I saw:

What the heck?! This was totally unexpected and took everyone by surprise. Shiloh was thrilled. Me? Not so much. It’s pretty but so were all those cheery daffodils blooming out front. Let’s just hope the roads are okay in the morning because David and I have a train to catch. We are going to Austin, Texas for a few days. It’s supposed to be 77 degrees there tomorrow and I am more than ready for that!