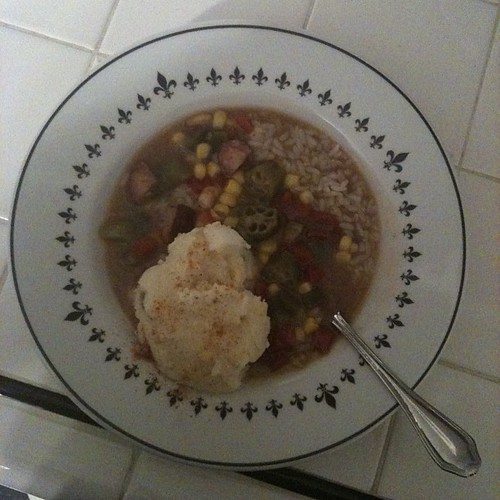 All gumbo begins with the instruction, “first you make a roux”.  Beyond that, the possibilities are endless. Since I’m currently using up what I have on hand, this is the “recipe” I used last night. Ordinarily I wouldn’t have the frozen “gumbo vegetables” as this was the first time I’d bought them (they were cheap and I thought they might come in handy for a quick meal). You can make a totally vegetarian gumbo or substitute smoked sausage for the andouille. Chicken and/or shrimp are good additions. You do need the okra (frozen is fine) for thickening, although you could use filet powder instead. Use fresh tomatoes when they are in season. And yes, I know that canned tomatoes are bad. I have a few cans of organic tomatoes that I had bought a case of so I’m gradually using them up. I will then start buying Poms brand tomatoes instead.
As for seasoning, Tony’s or some other Creole seasoning seems pretty necessary to me although you could use a pinch of cayenne plus a few of the other herbs and spices it contains to approximate it. Really though, do yourself a favor and buy one of those green cans of Tony’s and keep it handy. It’s good on everything but chocolate cake.
In addition to the Creole seasoning, I like Worchestershire sauce and soy sauce. Pickapeppa Sauce might be harder to find although it’s available in our small, local grocery store. You’re not likely to see it in most gumbo recipes but I love the addition. Kitchen Bouquet doesn’t do much flavor-wise but it does give it a darker color. Skip it if you don’t have it on hand. I can’t really tell you exactly how much of any of these to add as it’s a personal preference thing. Start with the amounts I suggest, simmer awhile and taste. Adjust the seasonings to your taste. Part of it will also depend on how spicy the sausage you use is.
So, after all those amazingly clear and concise suggestions, here we go!
Deanna’s Gumbo of the Day
Ingredients:
Directions:
First you make a roux. 😉 In a heavy skillet over medium heat, melt a stick of butter (or heat 1/2 cup of oil) and add 1/2 cup of flour. Stir continuously until it is the color of caramel or peanut butter. This will take several minutes during which time do NOT leave it unattended. If for any reason you have to quit stirring, remove it from the heat first. But really, try not to do that. These few minutes of dedication are the key to good gumbo. If you let it burn, you have to start over. There is no salvaging it. If you really want to achieve the ultimate in flavor, cook it over low heat for a longer time. And if you don’t have a cast iron skillet, that’s probably better anyway as it will be less likely to burn. This all sounds like it might be difficult but it’s really not. Just heat, stir and don’t leave it.
Once your roux is done, add the chopped onion, bell peppers and garlic (chop these before you start the roux). Continue cooking over low to medium heat while stirring. Add the sausage. Cook and stir some more. If you’ve been doing this in a skillet, now is the time to transfer it to a big pot. Add the water/broth, canned tomatoes and bag of frozen vegetables. Add the seasonings. Bring it to a boil, reduce heat and simmer until thickened – at least 30 minutes but a longer, slower simmer intensifies the flavors even more. Taste it periodically and add more seasoning if needed. It should be very rich and well-seasoned.
When done serve it in a large, shallow bowl with cooked rice. I like it with a scoop of homemade potato salad on the side of the bowl.

*I know my *recipes* might seem a little vague. Don’t hesitate to ask if you need clarification.