This afternoon I received a delivery. I’ve ordered several things for Christmas so I figured it was one of those. But it wasn’t. I opened the box and found the most gorgeous little bouquet of white roses and other flowers. Organic, even! 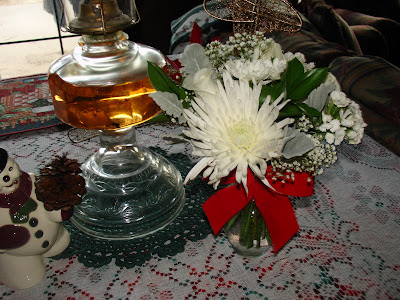 The card said they were a little early Christmas present from my daughter and son-in-law. I assumed this was my daughter’s idea – she’s such a sweetheart. But it turns out that they were Justin’s idea. That’s right. My dear son-in-law thought it would be nice to send me some flowers to enjoy before the holiday. Lisa, you picked a good one! And Justin, if you read this (or Lisa tells you about it), thank you so much! Every mother hopes her daughter will find someone who loves and treats her baby well. Finding one who is also so nice to his in-laws is a blessing beyond measure.