I often wonder what I ever did to deserve the life I live. This weekend was simply wonderful in every way. David and I had planned to leave Friday morning around 10 but it was more like 11 before we actually got out of town. We spent the drive reminiscing about the early days of our relationship and I even took some notes for my blog series, “The Hippie and the Pirate: A Love Story”. It was fun to relive those old memories.
We ate lunch in Norman and then did a little shopping at Kohl’s (David needed some Levis and a few shirts; I found a cute dress.). We arrived at the Skivin Hotel in Oklahoma City a little after 3 p.m. As soon as we got to our room the phone rang. Next thing I know a gorgeous bouquet was being delivered. David had arranged this for me even though he had already had flowers delivered on our actual anniversary. Yes, he spoils me.
He also had brought a bottle of champagne which he iced down but we never got around to drinking it this weekend. It’s now in our refrigerator just awaiting some random day when we feel like celebrating. Personally, I think we should celebrate ordinary days more often.
One of my cousins is a partner in a private investment company and he had invited us to come see their offices. About a year ago they moved to the Oklahoma Tower in downtown OKC, just a couple of blocks from the Skirvin. They are located on the 30th floor and the view is absolutely spectacular: 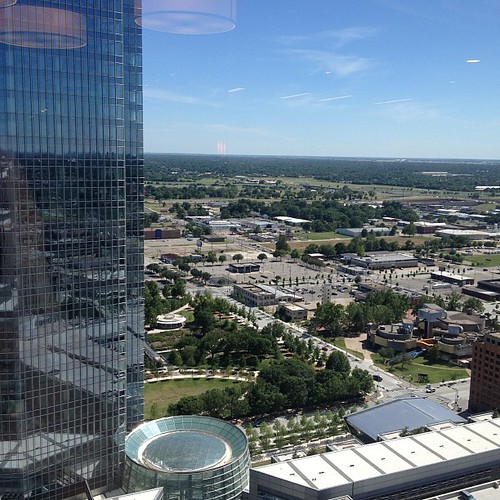 The entire suite of offices is impressive but the break room is what they are especially proud of. It’s designed to look like a pub, complete with a pinball machine, kitchenette, wine refrigerator and beer on tap. Here is my cousin getting ready to pour David a beer: 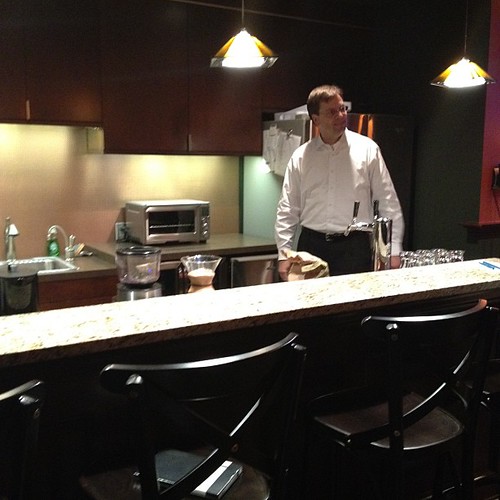 This picture doesn’t do it justice but you can get a bit of a sense what it’s like: 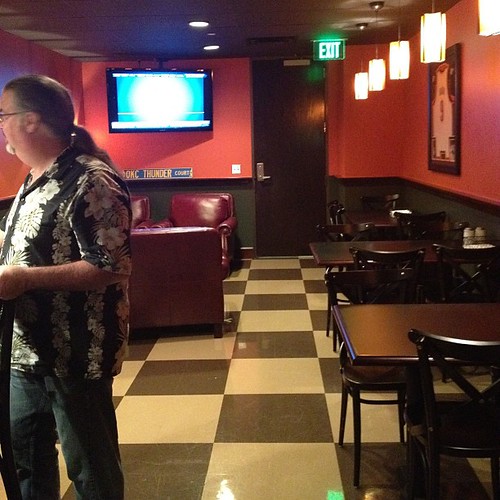 Back at the hotel we stopped at the Red Piano Lounge for pre-dinner drinks. We ended up having a great conversation with another regular as we so often do. We then went back to our room, changed clothes and got ready for dinner. Mike, the limo driver, gave us a ride to The Mantel: 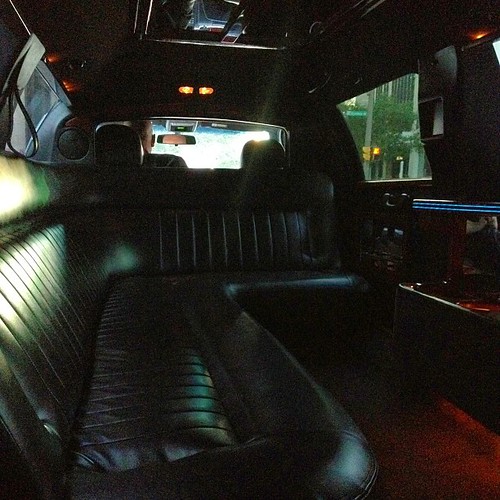 We both had filets and they were perfect. After dinner we met up with *our* bartender and her husband. She was on vacation and not working at the Red Piano Lounge this weekend so she invited us to join them at The Wormy Dog Saloon to hear the Kyle Bennett Band. We’ve gone out with them before and it’s always a good time. 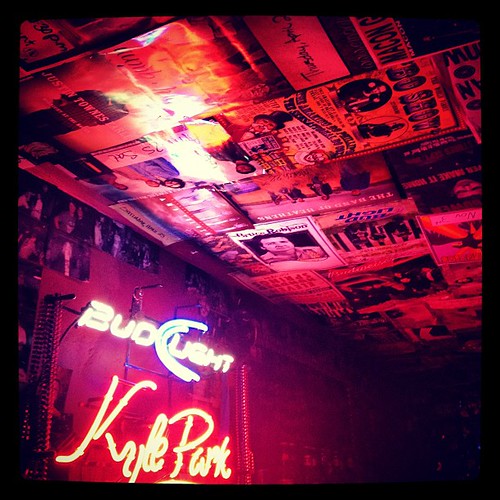 We finally called it a night at 2 a.m. and walked back to our hotel. Isn’t it beautiful at night?: 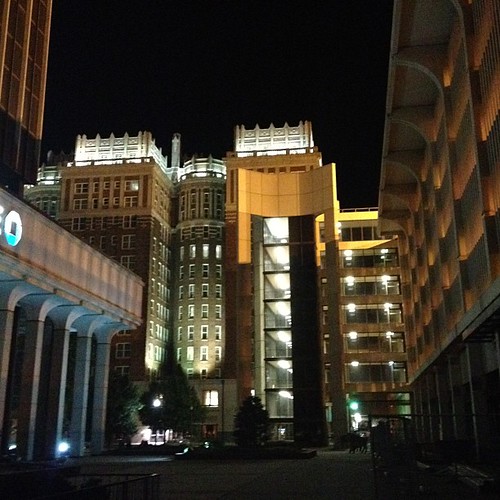 We ordered up room service for breakfast Saturday morning and then went back to bed. When I woke up it was almost 3:30. We were supposed to be at my cousin’s 50th birthday party at 4. Fortunately it was a come-and-go event! We arrived about 5 p.m. and had a thoroughly delightful time. Here is a picture of me with the birthday girl: 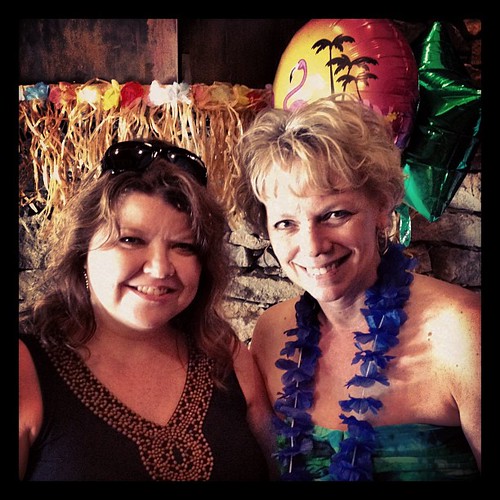 As you might guess, the party had a beach/luau theme. They had a really nice spread of finger foods and sandwiches on croissants. They were also mixing up pina coladas and daiquiris. Yum!
We had been hearing about this tree house they had recently had built for the kids: 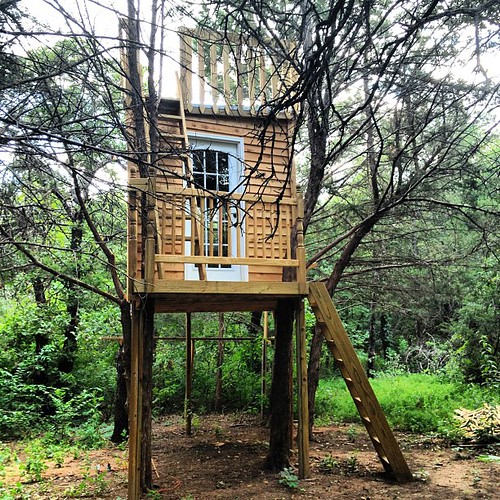 Check this out. I would have LOVED this as a kid. Heck, I’d like it now. 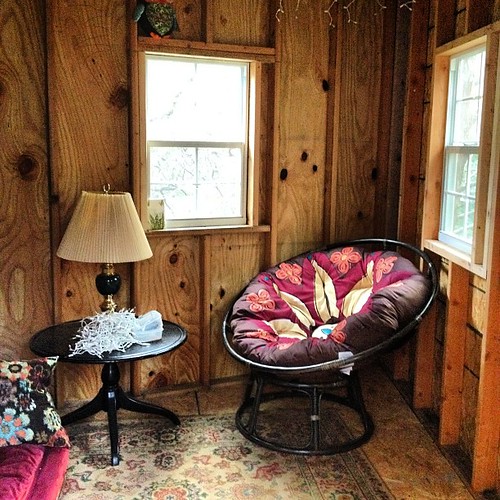 The backyard is so nice and the kids were having a great time in the pool. 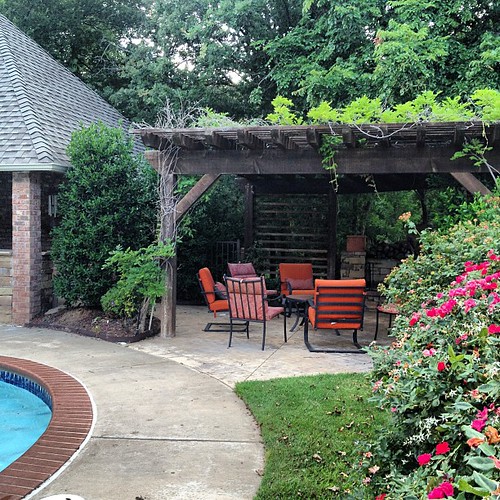 After an exceptionally nice time with everyone, David and I headed out across the city to the Hefner Grill. It’s located on Lake Hefner and I had read that dinner at sunset was really spectacular. There weren’t any tables available on the patio when we got there but they did seat us where we had a nice view out the windows. There was a four-piece jazz band playing, which was a nice touch.
Both of us ordered the blackened tilapia topped with shrimp and scallops. It was very good: 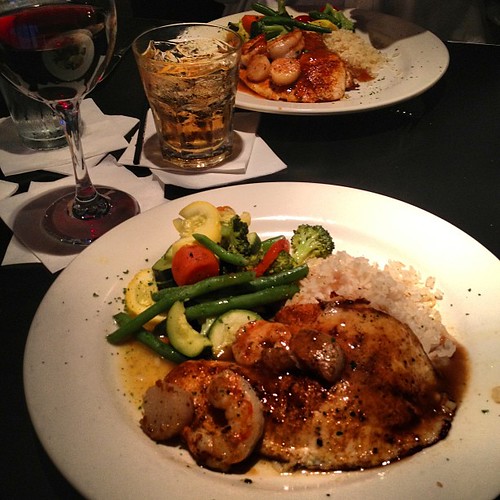 Before our meal was served I went out on the patio in order to get a couple of pictures. It was every bit as beautiful as I had hoped: 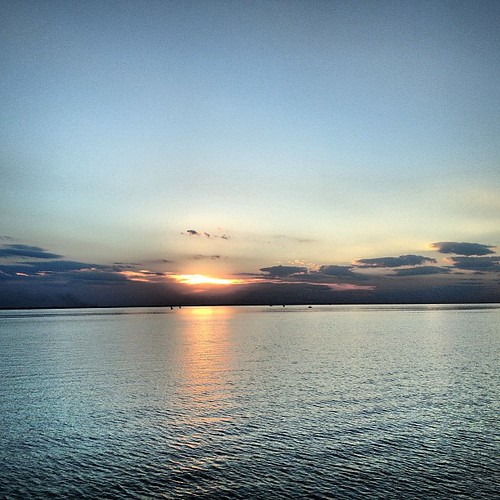 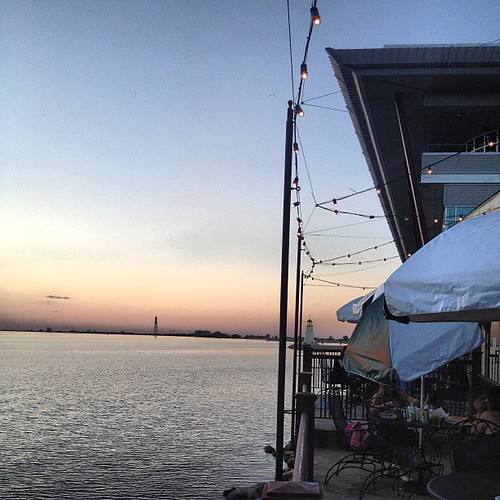 After dinner we went out on the patio and enjoyed the beautiful evening for perhaps 20 minutes or more. There were a few boats coming in, including a sailboat. Fish were jumping in the water below us and the temperature was so nice. It was just one of those perfect nights. 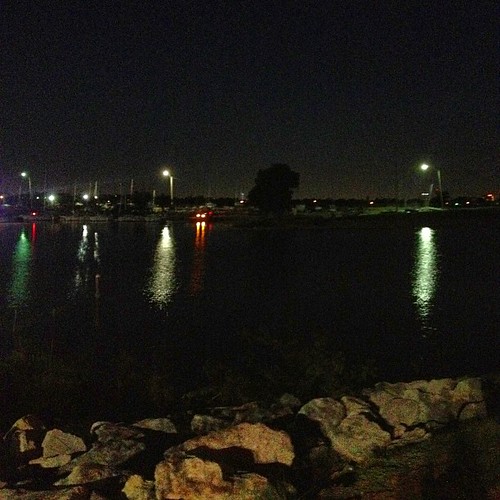 We then drove back to the Skirvin for a nightcap which turned into about 2 or 3 hours. We met a woman who is a teacher and had recently taught in Dubai. She travels a lot and we had such a fascinating discussion with her about, well, all sorts of things. I love talking to people who have had unusual experiences.
And speaking of unusual, at one point I ended up chatting with a guy with a HUGE goose egg above his eye. I don’t know the whole story but he was part of a wedding party that had come into the bar a little while after we got there. Ever the nurse, I had to ask if he’d lost consciousness after the fall and a couple of other questions. I then told his girlfriend what to watch for in case he had a concussion. Yes, I’m everyone’s mom. 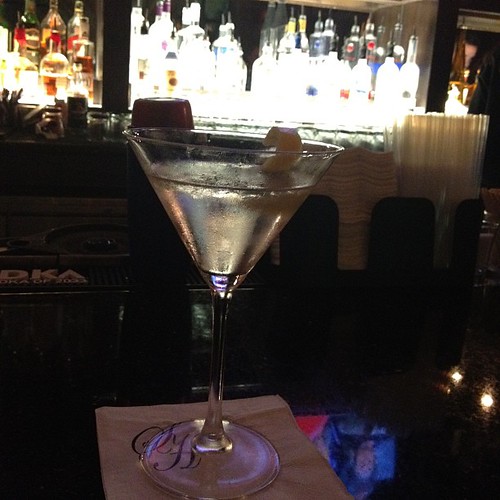 This morning we had room service again, requested a late check-out and finally, reluctantly checked out at 1 p.m. We ate lunch at Abuelo’s in Bricktown and then headed home. Tomorrow we will be back to our usual routine but this weekend was a much-appreciated break and an opportunity to celebrate 32 years of wedded bliss. I’m a fortunate woman, indeed.