Cool, huh?  Well, while attending Voodoo Fest in New Orleans a couple of weeks ago I spotted this guy: 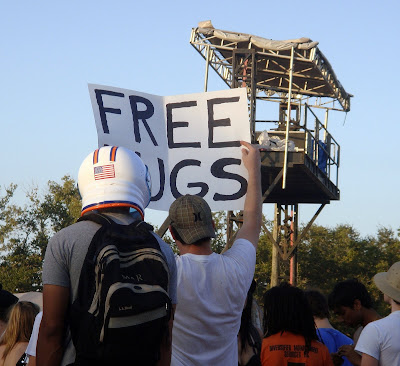 I didn’t see anyone else hugging him yet so of course I had to: 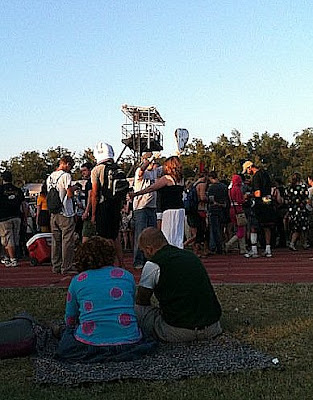 David snapped this picture with his iPhone from quite a distance so this was the best editing I could do.  That’s me in the white skirt and black top.  After our hug I sat back down with David and watched lots of other people take this young man up on his offer for free hugs.

Sitting on the grass at this big music festival, listening to music and watching thousands of young people (we were a lot older than the vast majority) simply having a good time gave me hope for the future.  It was a diverse group representing all races, ethnicities and sexual orientations.  All were brought together by their love of music and I cannot begin to describe the utter joy of watching hundreds of young people dancing together with complete abandon.  It didn’t matter whether the person next to them was black or white, gay or straight, Democrat or Republican.

Lately we’ve been hearing a lot of people screaming for “freedom” but I suspect we don’t all agree on the definition of the word.  Is it truly freedom if it doesn’t apply equally to all?  And how free can someone be if they don’t know where their next meal is coming from or they don’t have access to health care?  What about those who aren’t free to marry the person of their choice or serve openly in the military?  In order to be truly free as a society we must be willing to move past fear, bigotry, racism and selfishness.  Until all are free…in the truest sense of the word…no one is free.

A friend recently used the word “fearless” to describe the way David, our kids and I all express our views online.  He meant it as a compliment.  I thought it was an interesting choice of words and I’ve been thinking about it ever since.  Am I fearless?  No way!  I’m well aware of the fact that some of what I put out there in Cyber-land is not going to be met with universal approval.  In fact, we’ve been the recipients of some downright hateful comments, even by people who ought to know where our hearts are and that really hurts.  On the other hand, our willingness to stand up for our beliefs and for the rights of marginalized groups has also earned us the respect of many.  When you are white, Protestant, middle-class and heterosexual it is tempting to simply sit back and enjoy your privileged status.  Many do. But for some reason we feel compelled to speak out against discrimination and hate.  It’s not an easy road to travel but we’ve gone too far to turn back now.

I’ve witnessed so much hate in the past couple of years that sometimes I get really discouraged.  All one has to do is read the comments left on some blog posts or politically-based articles to be left wondering what has happened to our nation.  Too many now feel totally justified to express their hateful, bigoted opinions in the name of patriotism and religion.  It’s enough to make me want to throw up sometimes.

But occasionally you meet someone who restores a bit of your faith in humanity.  Last week as David and I flew to California we had the pleasure of meeting one of those folks.  A young man sat down on the aisle seat next to David and the two immediately hit it off.   Alex is a dentist serving in the military.  He was among those sent to Haiti immediately after the earthquake and served there for three weeks.  He said it changed his life completely.  His attitudes about money, faith and politics were all changed.  In some ways, his experience is similar to what happened to David and me following Katrina.  As I listened to Alex speak of what he saw in Haiti and his thoughts on life, I was so impressed.  And I know there are many, many more intelligent, wise, empathetic young people out there just waiting for their chance to change the world.  I hope I get to meet more of them.

So what can we as individuals do to combat hate?  There is only one answer.  Love.  This was what Jesus tried to teach us.  Love one another.  It’s utterly simple and incredibly difficult.  I’m making it my life’s work.  Will you? 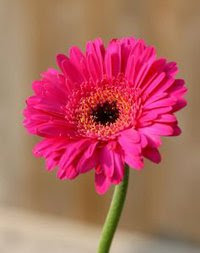 This post was written for the “Love Beats Hate” blog event:

“Love Beats Hate” is a blogging event designed to shine a spotlight on the power of love and the importance of speaking out on behalf of marginalized populations.

“This is the way of peace: Overcome evil with good, falsehood with truth, and hatred with love.”
~Peace Pilgrim~