David took me to Oklahoma City and Dallas this past weekend to celebrate my birthday. I feel utterly spoiled. And exhausted. Hey, if you don’t come home tired you aren’t doing it right. Right? Right.
We headed to “the city” (that’s Okie-speak for Oklahoma City) Friday afternoon. We didn’t get out of town until 3 p.m. and picked up lunch at Whip Dip, home of the “pepper burger”, as we were leaving. At one point David had to pull off the road for perhaps half an hour while he dealt with a work issue. He actually had his phone to one ear and mine to the other. Poor guy. I don’t know how he does it.
We finally got to the Skirvin Hotel around 5:30 and were delighted to discover they had upgraded us to a suite: 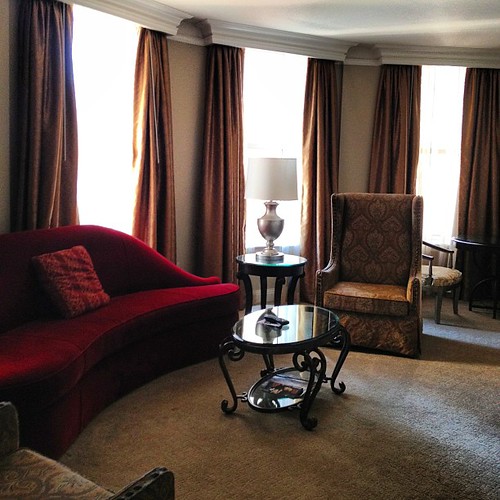 And it just so happened that we were in room 1016, directly across the hall from the notorious haunted room. You can read the story about it here. They have the old room key framed: 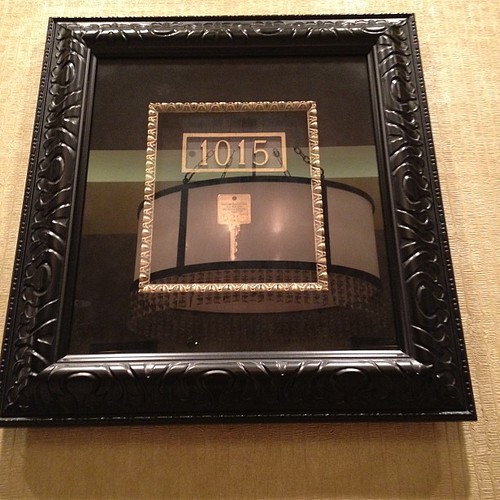 No, we didn’t experience anything out of the ordinary, darn it.
After checking into our room we went back downstairs to the Red Piano Lounge and enjoyed a pre-dinner drink (or two) while chatting with some of our favorite bartenders. We decided to try Mickey Mantle’s Steakhouse for dinner. Mike, our limo driver, drove us there and we enjoyed a very nice dinner. David had a filet and I had the grilled redfish with lump crabmeat and one of the best wedge salads I’ve ever had. We split crème brûlée for dessert which was quite yummy.
Mike picked us up and took us back to the Skirvin where we finished the evening back in the Red Piano Lounge.
The following morning we enjoyed a room service breakfast: 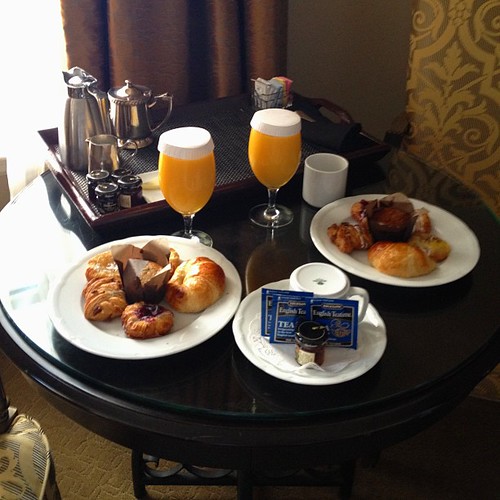 Don’t you just adore those cute little jam jars? The silver tea pot is pretty nice, too, although it doesn’t keep the water hot enough for a second cup of tea. 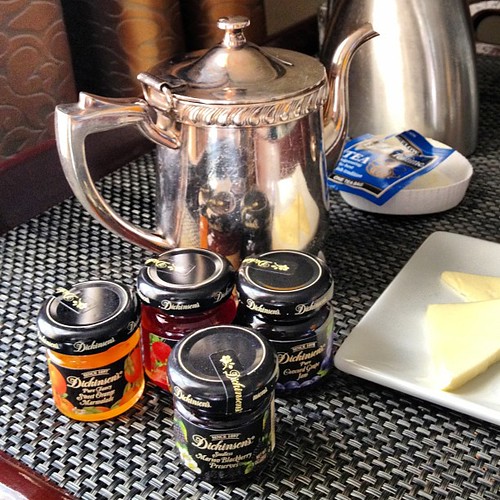 We enjoyed a leisurely morning in our room, went out for a late lunch at Tucker’s Onion Burgers then went shopping for new sofas. Our current sofa, love seat and chair are nearly 16 years old and have reached an embarrassing level of “used”. We had decided over a year ago that we needed to replace them but just never seemed to get around to it. A few weeks ago we looked at the local furniture store but didn’t see anything we liked. This time we had better luck. We opted for leather and chose sofas with a very sturdy hardwood frame, hand-tied springs and down cushions. Considering the quality and our history of not replacing furniture very often, these may very well be the last ones we buy. Ha! They didn’t have the color we wanted in stock so they special ordered them and we should have them in about 6 weeks. We got a sofa, love seat, chair and ottoman. Here is a picture of the floor model sofa (ours will be a burgundy color): 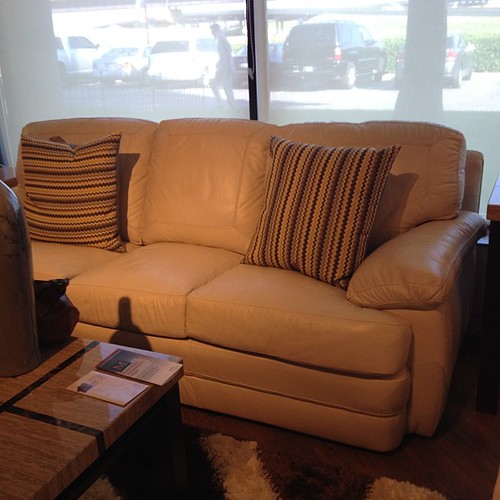 Back to the hotel we visited with our bartenders again for awhile, I changed clothes and then we decided to take in some live music. I looked up some places online and found one called Mojo’s which advertised live music. They also mentioned barbecue which sounded like a great combination. Unfortunately the barbecue part must have been when they operated as the Biting Sow as they no longer serve any food other than potato chips. The music was sadly lacking as well. “Doc Blue” might have been able to sing at one point but I’m going to guess that was at least 20 years ago. The band wasn’t bad and they did their best to play over “Doc”. 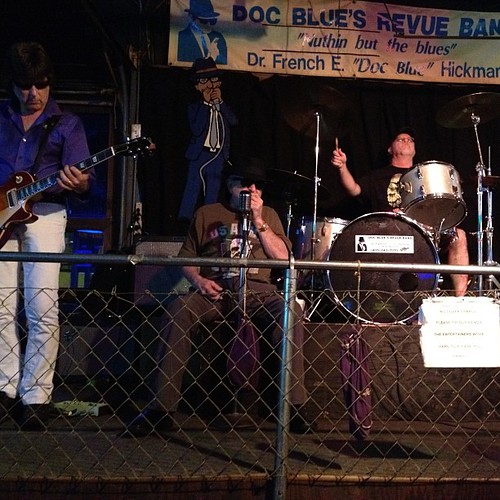 We stayed long enough to finish our drinks and be polite, tipped the band and then headed next door to Chileno’s for some relatively decent Mexican food. We walked back to the hotel, spent a little time in the bar but both of us were tired so we only made it to about midnight before deciding to call it a night.

Ordinarily two nights at the Skirvin would be a really nice birthday get-away but this year David took it up a notch. After we checked out at noon, we grabbed lunch at Sonic and drove to Dallas so we could see Our Mother’s Martyr (local metal band) perform at Texas Mosh Fest in Deep Ellum.

David was able to get several rooms at Candlewood Suites using points he accrues while traveling on business so we were able to provide rooms for the band and their wives/girlfriends. (This is the band that gave us the signed bass guitar last week.) Candlewood isn’t quite the Skirvin but it was clean and served the purpose. And it happened to be next to a cemetery which seemed appropriate for a metal band.

The music took place at The Prophet Bar and Our Mother’s Martyr had a great performance. 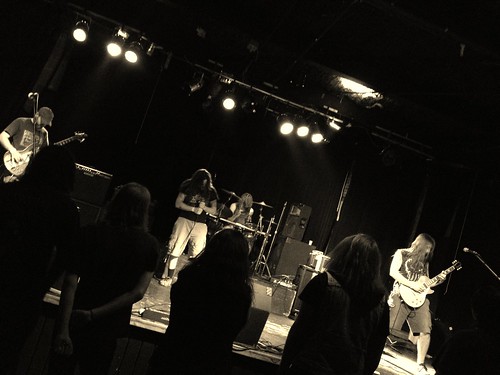 We stayed and listened to a few other bands and then went to Trees where we heard the last part of Nonpoint‘s show. The place was packed…for good reason. It wasn’t all that late but everyone was exhausted so we all headed back to the hotel and crashed for the night. We were awakened the next morning by the smell of bacon frying. It’s an extended stay sort of place and obviously someone was putting their kitchenette to good use. David started texting folks about breakfast and we all finally pulled ourselves together in time for the noon checkout. I was actually ready fairly early because, after showering and washing my hair, I discovered that while our room had a microwave and refrigerator it was missing a hair dryer. It was mostly dry by the time we left.

We all headed for IHOP where we enjoyed a delicious and much-needed breakfast/lunch. We were just about to leave when it occurred to me that no one had taken any group shots. We broke it up into guys and gals.
Here are the men, with Casey (lead singer) hamming it up:

And the groupies, er, I mean women, including our niece who joined us for the show and then again for breakfast:

With full tummies and happy hearts we piled into the vehicles and headed back home. We had hoped for naps but by the time we finally made it home it was really too late for that.  David grilled hot dogs which Chris and Kadi ate with us. When I took Shiloh out for an evening walk I realized how nice the temperature was so I poured myself a glass of wine, brought my Bose outside for music and sat out under the stars. As soon as the movie David had been watching was over he joined me. With Shiloh lying between our chairs we did one of our favorite things – counting our blessings under a starry sky.