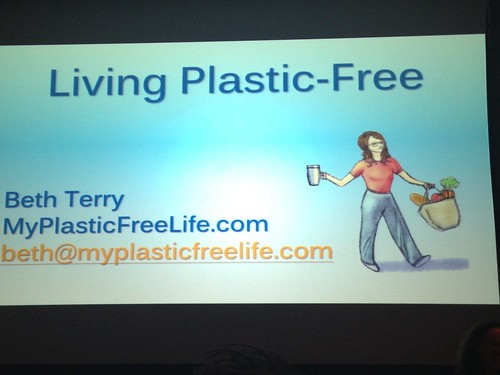 I hardly know where to begin. My daughter, Lisa, and I took a little trip to Tulsa Tuesday and Wednesday. Beth Terry, author of “Plastic Free – How I Kicked the Plastic Habit and How You Can Too”, was speaking at the University of Tulsa and she had asked Lisa to speak with her. What an honor!

We left town a bit after noon on Tuesday and headed toward Tulsa. It had been warm the day before but a cold front had come through, along with some much-needed but poorly-timed rain. As we were approaching the turnpike entrance in Stroud, we got one of our hair-brained ideas and decided to see if we could find the Keystone XL pipeline and get some pictures to show Beth. Lisa looked it up on her phone and with only a rough idea of where it is located we took our detour. Remember now, it’s raining and has been for several hours. The road we think will lead to our destination turns out to be a heavily-rutted gravel road. And we are driving my Prius. Do you think that deterred us? If so, you don’t really know us very well.

We went about a mile down the teeth-jarring road but it was rather muddy and after slipping a few times we decided to give up our quest. I really didn’t want to have to call David and try to explain why we got the car stuck in the mud when we were supposed to be on the turnpike.

We did, however, find another little gem. Did you know that Stroud is the wine capital of Oklahoma? 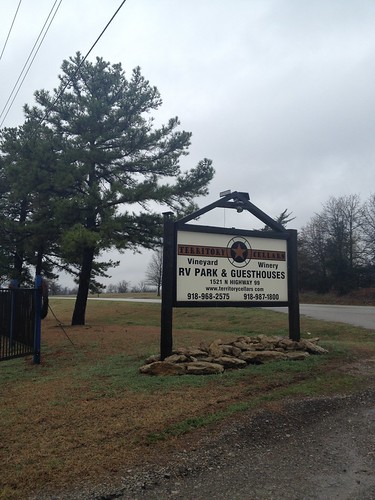 And have you ever seen a winery/R.V. park? Neither had we: 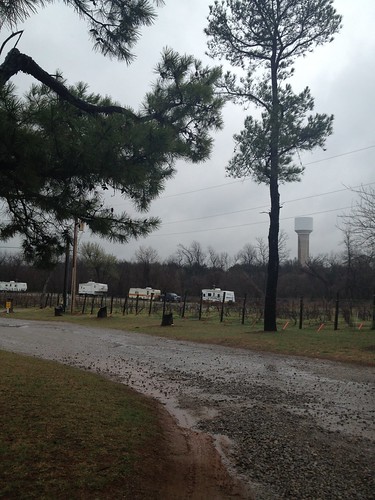 Back on our original path, we drove the rest of the way to Tulsa in a moderate rainstorm. We stopped at Whole Foods for lunch and then checked into our hotel. David had reserved a room for us at the Doubletree which just so happened to be the same hotel where he and I had experienced a fire scare and had to leave our room to go stand in a stairwell with a bunch of strangers in pajamas. Ah, the memories.
We changed clothes, fixed our hair and makeup and then headed to the university. When we entered the event room Beth was looking over some notes at the podium but when she saw us hurried to meet us with hugs. We all hit it off immediately. Lisa has known Beth via online and phone interaction for quite awhile but I’ve only interacted with her a bit on Facebook. She could not have been nicer and really helped make Lisa comfortable before her first speaking opportunity. 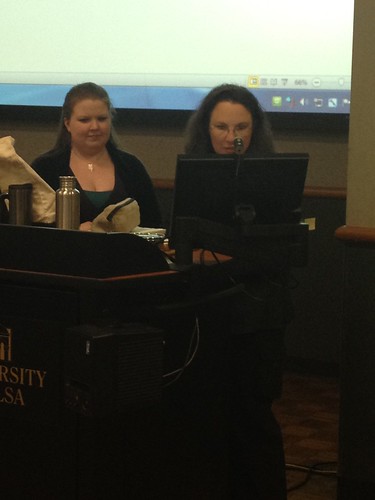 Beth’s talk was very informative and entertaining. She’s an excellent speaker – funny, warm and engaging. Throughout the talk she would periodically have Lisa speak. She asked Lisa to explain how she became interested in environmentalism, talk about glass straws from Glass Dharma, Lisa’s website – Green Oklahoma, her part in helping Ada get curbside recycling (Lisa is featured in Beth’s book because of this), and Lisa’s current activist project. I cannot begin to tell you how proud I was of how well she did. I recorded the portions where she was speaking but I promised her I’d let her see them before I shared them. Hopefully she’ll let me upload them to YouTube and then y’all can see how well she did.
Following the event and book signing, the organizers of the event took Beth, Lisa and me out to dinner at an Irish pub. Book Smart Tulsa was one of the organizers of the event and the co-founder, Jeff Martin, was one of the three people who took us out. He’s also an editor with This Land Press and encouraged Lisa to write an article for them. We had a wonderful time and the conversation was so interesting.
After dinner we drove Beth to her hotel, went up to her room and then proceded to gab like old friends until after 1 a.m. Unfortunately Beth had an 8 a.m. flight so we finally had to call it a night. We hugged, took pictures (on Lisa’s camera – if they are decent I’ll share later) and made promises to get together again someday.

Here is a picture of the sitting room in Beth’s hotel room: 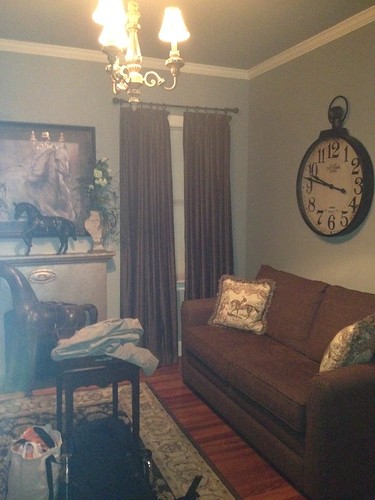 It’s a really cool little boutique hotel which had been part of a design project. In the hallway outside Beth’s room I spotted this and thought “is that a Remington??” Sure enough. It was: 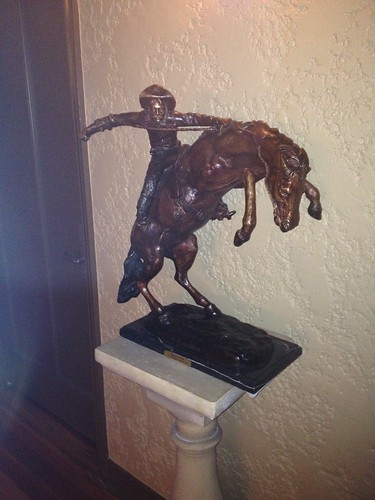 We left our hotel at noon the next day and went to Utica Square for lunch. When I spotted this, I had to take a picture: 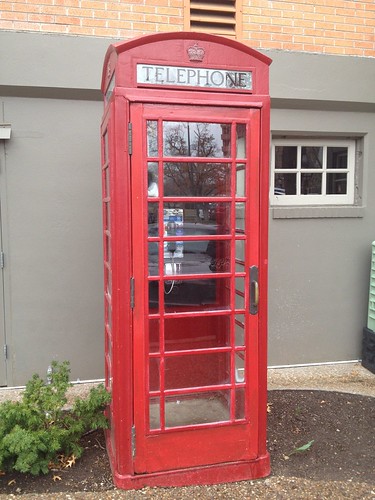 We ate lunch at the Polo Grill where I had perhaps the best burger I’ve ever eaten: 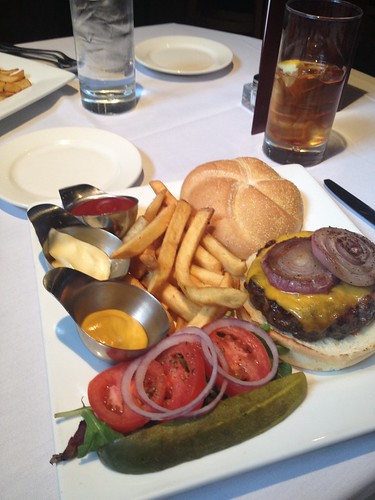 There was a yarn store next to the restaurant so we popped in there for a few minutes to drool over the pretty yarn. We decided we have good taste (check the price): 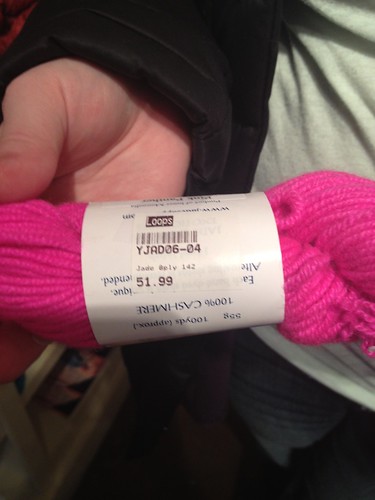 No, we didn’t buy any. Next up, we went to Reasor’s grocery store because Beth had mentioned at the event the night before that they sell milk from Memory Lane dairy which still uses glass bottles. Yes, I bought some. And we also found a new-to-us, organic, locally roasted coffee there. We each bought a bag to try and Lisa will be adding the company to the resources on her site, Green Oklahoma.
Next up was Whole Foods where we did our monthly grocery shopping. I didn’t buy a lot since David and I will be in New Orleans for 10 days this month (I’ll share the grocery haul video I did tomorrow or Saturday).
We then headed for home. As we got to Stroud, Lisa looked up the town’s historical information on Wikipedia which turned out to be quite interesting. If you enjoyed the Pixar movie, Cars, take a look at the Stroud Wikipedia listing. There’s a really neat connection.
Ever the autodidacts, one thing led to another and we spent the rest of the trip home with Lisa looking up various Oklahoma towns and reading the history to me as I drove. We now have a whole list of potential field trips we want to take. And yes, one of them will no doubt involve taking pictures of the Keystone pipeline but we’ll pick a sunny day for that. 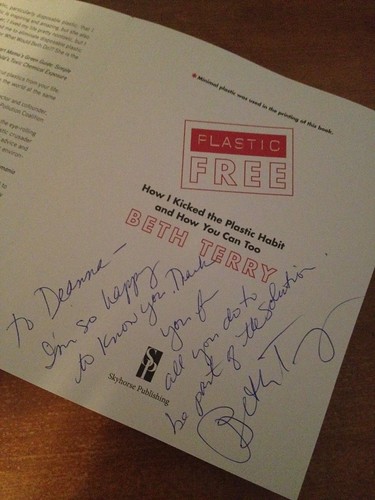 Be sure to read Lisa’s blog post about our adventure. And you can see the picture of the three of us there so I’ll probably not share it here.