This is my birthday week and I’m spreading out the celebration. On Monday we went out to dinner with our kids and three couples we’ve been friends with for ages.  The four kids ate dinner with us and visited for awhile before leaving the “old folks” to our own devices. We ended up chatting at the restaurant until after 10 p.m. and finally left with promises to get together more often.
Just as we were getting ready to go to dinner, one of our friends who is in the local band, Our Mother’s Martyr, texted David and said he had something for us. They met up with us before dinner and we were absolutely stunned by what he gave us. A bass guitar signed by the whole band: 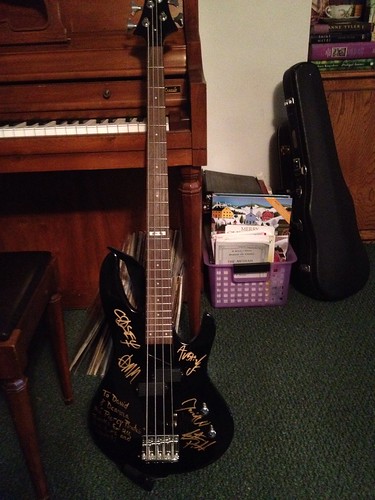 It’s a terrible picture but the inscription reads:
To David & Deanna
The “Piercy Pirates”
Thanks for all the love and support. 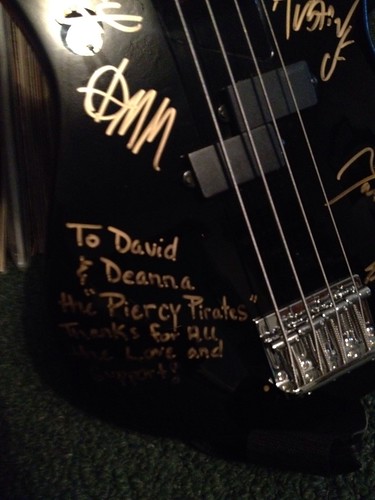 We were utterly blown away by this kind gesture. It’s not every day that the members of a heavy metal band give you something like this. 😉 We will be hanging in on the wall of our library/music room and someday, when Our Mother’s Martyr is famous, we’ll be able to point to it and say “We knew them when.”
Yesterday was my actual birthday and we had thought we’d be going out to dinner with David’s boss who was in town. He ended up not feeling well and opted to just go back to his hotel. I had cooked a big casserole earlier in the day for Compassion Outreach, a local medical ministry, but since I thought we were going out I hadn’t planned anything for us. David offered to take me out but we ended up deciding to spend a quiet night at home. He picked up barbecue for us and we watched a movie – Metropolitan.
He’s out of town tonight but will be home tomorrow. If he’s not too wiped out we might go see “Meet Me in St. Louis” which is being shown at the old, refurbished theater on Main Street. And then Friday we head to the city for a weekend at our home-away-from-home, the Skirvin Hotel. We had originally planned to come home Sunday afternoon but then we found out Our Mother’s Martyr is playing in Dallas Sunday night so we’ll drive from OKC to Dallas, see the show and then come home Monday.
Yes, I think I’m doing this birthday thing right!