How was your Easter weekend? Ours was truly enjoyable and the weather was spectacular. David was out of town until Saturday night which means I went to bed very late Friday night – I have a hard time sleeping without him. Sweet Shiloh awakened me at about 8 a.m. to go potty. I had slept less than 6 hours and fully intended to go back to bed for an hour or so but when I went outside and realized how beautiful it was, I changed my mind. Instead, I made myself some hot tea and drank it on the front porch. It was warm and sunny and there was a veritable bird party going on in our trees. I sipped tea and watched the birds for perhaps an hour and then had to get busy.
The woman who bakes the bread for our church communion services injured her back so I volunteered to bake the Easter communion bread. My recipe makes 5-6 regular loaves so in addition to the large communion loaf I ended up with 4 loaves for us, too. I also prepared all the food for our Easter lunch. Our family tradition is to meet at my cousin’s house after church for lunch and an Easter egg hunt. A number of years ago we all decided to make it easy and just bring our own lunches. Most pick up KFC but I prefer to make ours. I fried chicken, made potato salad and coleslaw, and baked chocolate chip cookies. You should have seen my kitchen after all that!
I did take a break from all the cooking to have dinner with Chris and Kadi. Chris picked up some BBQ and after Kadi got off work the three of us enjoyed a nice meal on the front porch. The weather was perfect and I’d have loved to just stay there all evening. But I had to finish the cooking, do a load of laundry and vacuum the Shiloh hair.
I did manage to get all of that done before David got home around 9:30 p.m. When he drove in, Shiloh and I were on the front porch waiting for him. It was still so warm outside that we sat out there listening to music. We took Shiloh for a walk and noticed that despite the lightning in the East, the sky above was clear. David had bought us a couple of zero gravity chairs last week so he got those out of the boxes and set them up in the front yard. We laid back in our chairs and enjoyed the starry night and the light show for close to an hour. It was so good to have him back home!
Around 5 a.m. we were awakened by a pretty impressive thunderstorm. Shiloh was pacing around and acting like he needed to go out so David took him (in the rain). That wasn’t the issue, though, as he continued to walk around, panting in our room for awhile. I think he was disturbed by the storm. He finally settled down on the floor by my side of the bed and went to sleep but by that time I was fully awake. I was just starting to dose when the alarm went off at 7:30. Oh, well.
We needed to be at church early so I could get the bread set up for communion, make sure the Easter lilies had been arranged, and rehearse with the choir before the service. It was nice to see so many folks who were back in town visiting. There were a lot of children: 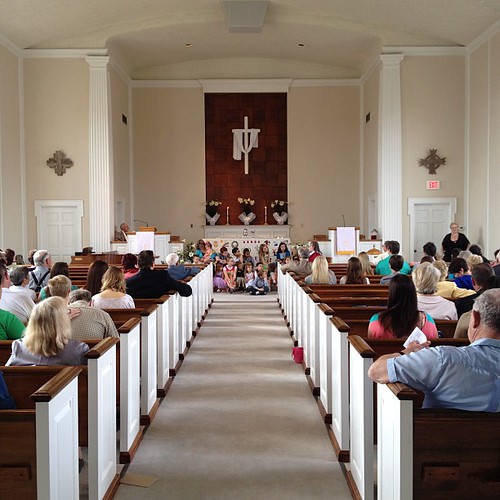 After church we ran home to pick up our food and take Shiloh out then went to my cousin’s. I didn’t count but I’d guess there were at least 35-40 there. It’s always nice to see everyone. Lisa didn’t go this time because she was cooking a big meal for her in-laws but Chris and Kadi came by for awhile.

It was a gloriously beautiful day and after lunch and the egg hunt, the kids flew kites in the front yard: 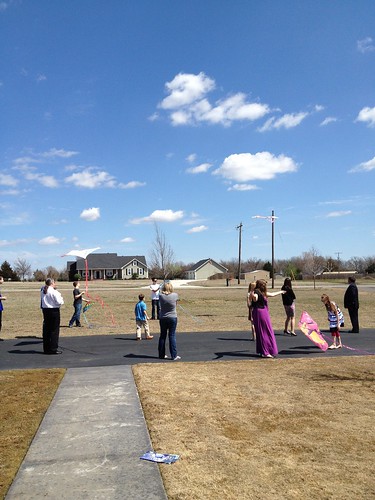 My dad wasn’t feeling well and both of my parents had been up early because of the storm so they stayed home to rest. I had an Easter card and homemade cookies for them so we ran by to drop those off. My mom was asleep but Dad was sitting on the front porch enjoying the weather. We visited with him a little while then headed for home.
Despite the mess in the kitchen (I hadn’t finished all the dishes from Saturday’s cooking spree), we decided it was too nice to be indoors. We took our new chairs out in the yard again and settled in with iced tea and music. We laid out for close to three hours. Shiloh was thrilled to not only be outdoors but to have company at the same time. Finally, around 6 we went in and David helped me finish up the dishes. We ate dinner while catching up on a couple of episodes of The Daily Show.
Then David had a very nice idea. He opened a bottle of wine, took his telescope outside and we spent the next couple of hours enjoying music, sipping wine and stargazing. The only planet visible was Jupiter but that was pretty cool to see. David has an astronomy app on his phone so we used it to check out some of the constellations. We also danced under the stars. But mostly we laid back in our chairs and just enjoyed a peaceful time together.
Around 10:30, Chris and Kadi came home from visiting her grandmother. They had brought Kadi’s little sister (Libby) home with them so they all joined us for a little while. David got out of his chair and let Libby try it out. She leaned the chair back and David covered her with his blanket (it had gotten a little cool so we had brought out blankets earlier). She loved it and said she thought she’d just spend the night in the chair. It was getting late so we all reluctantly called it a night but I foresee a lot more nights just hanging out and enjoying the stars.
So that is how we spent our Easter weekend. David should be home from his firefighter meeting soon and we are going to grill hamburgers. It was another beautiful day and I had hoped it would stay warm enough to eat on the porch. Sadly, the cold front is already coming in and it’s only 59 degrees now. I suppose we’ll have to eat indoors. And no porch time or stargazing tonight. Boo. Maybe we’ll spend a little time listening to records in the library and if we’re smart we’ll go to bed early. Nah. That’ll never happen.