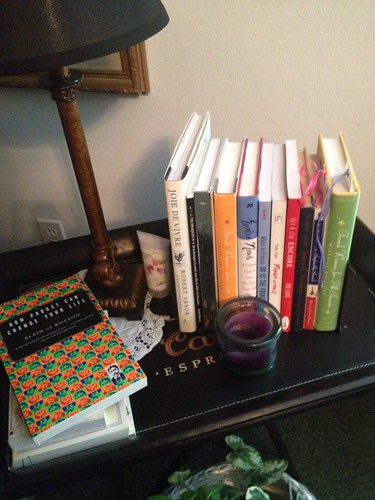 I think what appeals to me most about the stereotypical French woman is the way in which she lives life intentionally. Rather than just allowing life to happen to her, she makes deliberate choices and designs her own life. Every once in awhile I need a reminder to do likewise and that’s why I’m restarting these French Friday posts.
My plan is to devote Fridays to developing the intentional habits I desire for my daily life. I figure if I make Fridays rewarding enough, those habits will begin to spill over into the rest of my days.

The French are famous for their love and appreciation for fine food so carefully planned meals are part of my French Friday plan. Here is what I ate today:

I went to the library this morning when I was in town running a couple of errands and picked up a French film to watch this afternoon:
The Grocer’s Son (or “Le fils de l’épicier”)
It was a delightful film with stunning cinematography.
I then tried to take a nap before David got home (I hadn’t slept well last night) but alas, the phone rang about 15 minutes into it so that was the end of that. I had thought David and I might sit out and star gaze a bit tonight if it cooled down enough but at this point I’m so exhausted I think I’ll curl up with a book and make it an early night.
Here are a few articles/blog posts about French living which I thought I’d share:
1. Tips On Bringing Out Your Inner Française
One of my favorite of the tips mentioned is:

FW (French women) do not think it’s cute or quirky to be neurotic. You will not find them talking about how afraid they are to be dumped yet again or how they were teased about whatever as children. FW will make themselves vulnerable in other ways, but they do not self-deprecate.

Indulge yourself sometimes, and savour it. Buy a single exquisite chocolate, the best you can afford and eat it slowly, rather than demolishing a bar of Cadbury’s Dairy Milk. Get the occasional manicure. Buy an Italian Vogue. Whatever floats your boat do it, not every day, not even every week, but every so often. A little decadence goes a long way.

This is something I’ve been working on:

Invite friends over without making a fuss about it. It’s easy to assume that the French entertain quite lavishly, but in my experience, the opposite is true. Most French women entertain as insouciantly (yet dashingly) as they toss a scarf around their necks.

David just made me a cosmo which isn’t French but is tasty. I’m going to read a few more French-themed articles online while I sip my cocktail and then I’m going to crawl between the sheets and read awhile. Bonne nuit, mes amis!