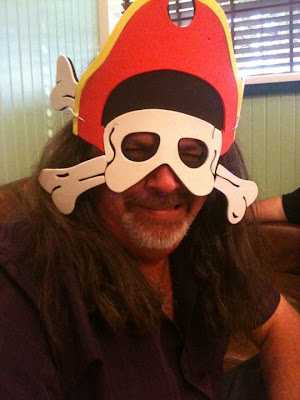 Captain Dave
My husband, the pirate, turned 50 on Sunday.  I had intended to have a big celebration on Saturday night but last week he had to go to Sioux City, Iowa on emergency business.  Their location up there is right on the river and will be under water in a few days.  He took some men with him and they worked 14 hour days disassembling and moving everything to higher ground.  He did manage to make it home Sunday afternoon but had picked up a dreadful cold the day before.  All he wanted to do was go to bed so no party for the pirate that day.
He still felt pretty awful Monday and didn’t go to work, although he did spend a good portion of the day handling business via phone.  Fortunately, after numerous doses of the concoction we fondly refer to as “voodoo meds” he was much better Tuesday.  I sent out messages to friends via Facebook to meet us at our favorite restaurant.  Our kids, son-in-law and about ten others joined us to wish David a happy birthday.  One friend had popped into a party store on her lunch break and found the pirate mask/hat which the birthday boy is wearing in the picture above.  She also bought eye patches for the rest of us.  Our bartender took a group shot with his camera but hasn’t uploaded it to Facebook yet.  I’ll post it here when he does.
I had also called “Joe the Bartender” to see if he could arrange for some creme brulée for David.  It’s his favorite dessert.  The restaurant owner took it one step further and made a huge flan (similar to creme brulée but without the crispy top) for David and all the guests.  The owners also gave him a novelty wine glass that lights up which is what Joe served his drink in.  You see why we love this place?
After a delicious dinner with friends, most of us then headed to Vintage 22, a nice wine and dessert bar, for Tuesday Trivia.  Every Tuesday night they host a trivia game played as teams.  There are even prizes.  We’ve been a couple of times in the past but it’s been awhile.  We joined four other friends when we got there and had a lot of fun.  We didn’t win but we had a respectable showing.  After trivia was over we sat on the patio with friends for awhile.  It had been really hot earlier but was a comfortable 80 degrees with a little breeze.  One of Chris’ friends brought over a glass of champagne for David in honor of his birthday.  He offered me one but I was the designated driver for the evening so I declined.  Finally, around 10:30 we decided to call it a night.  It wasn’t exactly the birthday party I had envisioned for David’s 50th but good food, a fun game and best of all, being surrounded by people who love you isn’t a bad way to celebrate.
Happy birthday, David.  I love you!