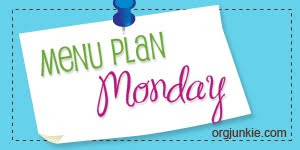 Click here for more menu ideas.
I’m still working my way through the freezer and pantry but it’s hard to see that I’ve made a dent.  Well, perhaps in the pantry but the freezers are still packed.  Part of that is due to the fact we bought a new refrigerator last week and the freezer compartment of a French door-style refrigerator is a little smaller than that of our old side-by-side.  I  had to put some items in the chest freezer so the progress I’d made there is no longer evident.  But intellectually I know I’m using up stuff.
This week, the items I’m using from the freezers include: frozen fruit for my morning smoothies, flour tortillas, a partial bag of frozen spinach and green beans.  I’m making banana pudding today in order to use up some very ripe bananas in the fruit bowl.  I had used part of a can of black olives last week and portions of a green, red and yellow bell pepper as well, for the Chinese Chicken Salad.  I also have about half of a large onion cut and stored in a glass jar in the fridge so I’ll be using those items tonight for homemade pizzas.  The partial bag of frozen spinach will be used Wednesday in a new-to-me recipe for Spinach Bake*.  This also uses eggs, something we have an abundance of.  A couple of jars of my homemade, frozen broth will be used in Tuesday’s Mexican Corn Chowder*.  I’ll also be looking to see if there are any items I can use in the guys’ lunches, or thaw for my own.
*Recipes to follow later this week.