It only took 14 years of living here but I’ve finally discovered the “pleasures of the porch”. We have a large, shady front porch but for some reason we’ve never fully appreciated and enjoyed it. I’m not entirely sure why although Oklahoma weather extremes and bugs certainly play a role. David is a mosquito magnet and the minute they come out, he goes inside.

However, I decided that I was going to start spending less time on the computer and more time relaxing and listening to music on the porch. I scrubbed the winter grime from the table and chairs, cut a few pieces of blooming honeysuckle, poured a glass of wine, lit a candle and turned on some music. It was pure heaven! 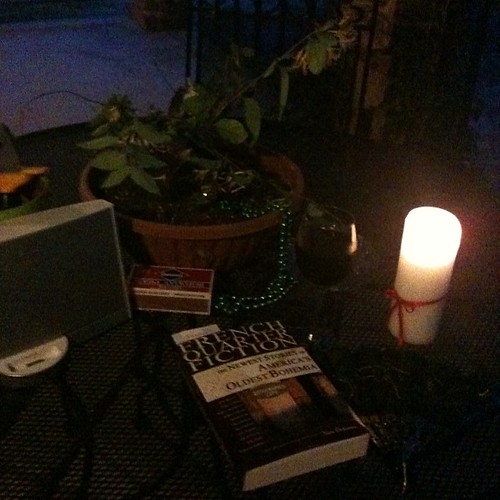 I began looking forward to “porch time” and carving out more time for it. Even on mornings chilly enough to need socks. 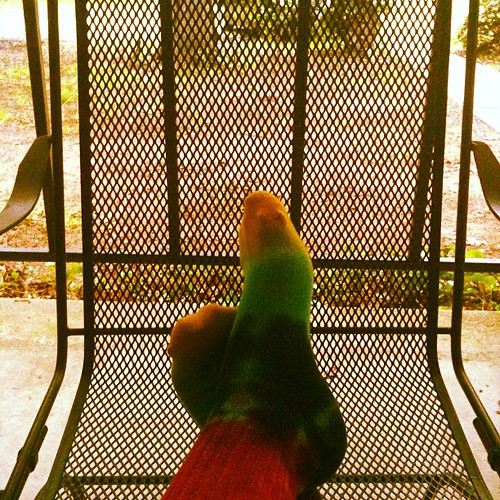 Over the past couple of weeks the porch has become my haven. I brought out a couple of houseplants, another candle, and a basket for various items such as magazines, a fan, hand lotion and matches. I’ve been enjoying my morning tea out there, too. 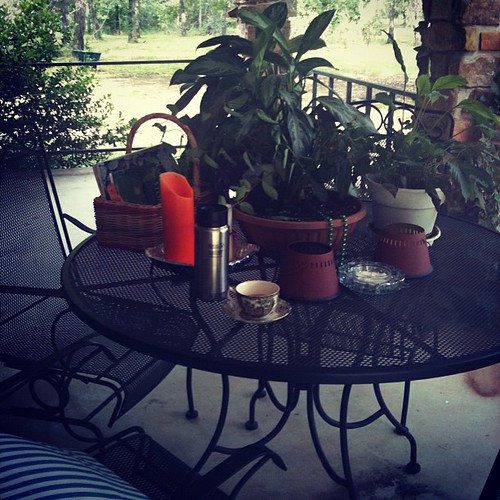 We also solved the bug problem. David bought two citronella candles and I picked up some incense to burn. The mosquitos aren’t as much of a problem after dark so that’s when David joins me on the porch. Dive-bombing June bugs are the after-dark issue but we solved that by leaving the porch lights off but turning on a light indoors. The bugs are attracted to that and away from us.

Every night after dinner we head for the porch. I usually save my evening glass of wine for this time and David has been enjoying the hand-crafted vanilla rum he bought from a fellow-pirate in New Orleans. Occasionally we’ll have a homemade cookie or a little piece of dark chocolate. And there’s always music. I have a Bose docking station for my iPod or iPhone and we generally listen to something soft and blues-y. We’ve even shared a brief dance on the porch once and I hope to do more of that.

And here is the one who joins us every night: 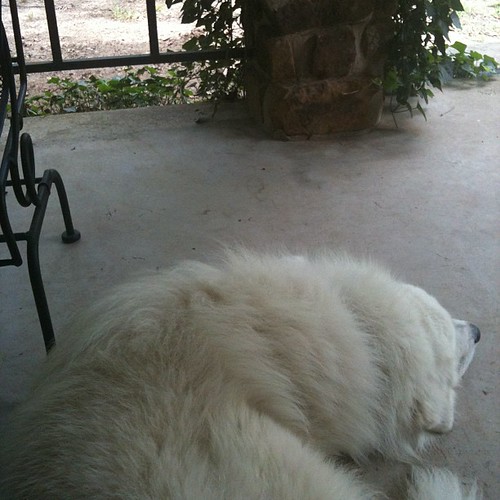 Sweet Shiloh LOVES porch time. He seems to know what the word “porch” means and gets excited when we ask him if he’s ready for porch time. By the way, he had the pins and external fixator removed last Friday, and was neutered as well. He’s putting more weight on the injured leg now and soon should be as good as new.

So that’s where I’ve been. I’m making an effort to stop filling up every minute with activity or computer time and purposely make time to just *be*. Sitting with my husband, listening to music and petting the dog have become priorities for me. I only wish I’d started this sooner.