So, (isn’t that how all good stories begin?) a few days ago my friend Heather asked if I’d like to go with her to a counter-protest against the Westboro Baptist Church in McAlester.  Um, yeah!  If you aren’t familiar with WBC, check out the links I’ve provided but be prepared to be sickened by their hate.  So of course I wanted to go.  Besides, “attend a protest” is on my list.

Before I tell you about our day I should probably give a little background.  In November, some of the WBC protesters were in McAlester, Oklahoma to protest a military funeral.  Why?  Because that’s what they do.  They didn’t exactly meet with approval from the fine folks in McAlester.   In fact, someone apparently slashed two of the tires on their minivan, which wasn’t right but ya gotta understand the impulse.  The story made national news in part because the WBC protesters drove around town on flat tires, unable to find anyone who would repair them or sell them new tires.  Eventually Walmart received orders from the corporate office and did sell them two new tires.  Since that event, WBC has carried a grudge against Oklahoma and the hate they have been spewing is beyond belief.  They claim that deaths in Oklahoma are the result of an angry God striking down our children and crashing our planes.  They now picket the funerals of Oklahoma children.  Can you believe that?

So when I heard they’d be back in McAlester, only about an hour away, I had to go.  Heather and Jenn picked me up Friday and we headed to McAlester.  We had lunch first and then went to the military recruiting office to await the protesters.  The office is located in a shopping center between a sporting goods store and a game store.  And it appeared to be closed.  Hmm…would the protest even take place?  We sat in the car and scrutinized every vehicle around us and those driving by.  We got really excited when we saw a car with a Kansas license plate (WBC is located in Kansas) but the driver was just going to the sporting goods store.

But then a car pulled up next to us and a guy with a rainbow flag wrapped around his waist got out and strode purposefully to the recruiting office.  And then another man who was apparently a veteran and walked with a cane got out of his truck and started talking to rainbow guy.  Yes!  It was going down.  We got out and asked what was going on.  They told us that the protest site had been moved.  Rainbow guy said to follow him so we did.  On one corner, the WBC protesters, behind yellow police tape, were singing and chanting their hate-filled rhetoric while on the opposite corner a small group of counter-protesters was forming.
Rainbow guy leads the way 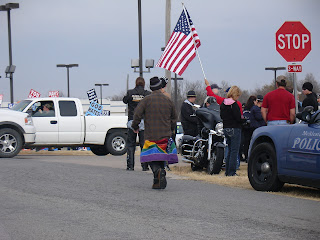 WBC protesters and their hateful signs 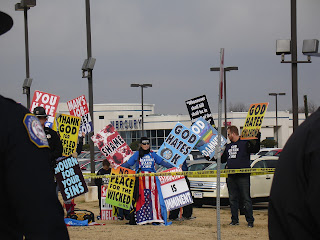 This is John, our new friend 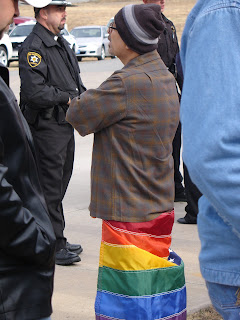 My friends, Jenn and Heather 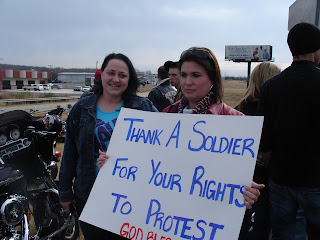 We had a group of bikers on our side. 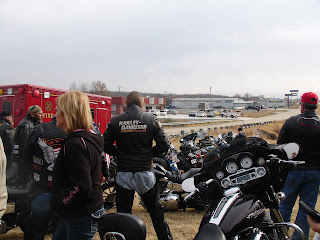 It was a peaceful protest/counter-protest, lasting about 30 minutes or so.  Then they packed up and headed to the next protest location which had been moved to the hospital rather than where it was originally scheduled.  John asked if we knew where the hospital was and then told us to just follow him.  Thanks, John! 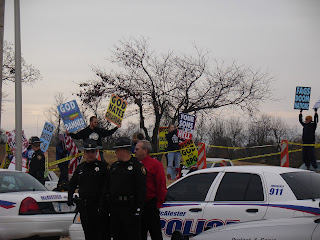 This counter-protester spent part of his time in prayer at the site but the funny thing was when he shouted to the WBC folks that he would take responsibility for the slashing of their tires.  They had offered a $5000 reward for information and this guy told them they could give him the reward.
He would donate it to charity.
They didn’t take him up on this. 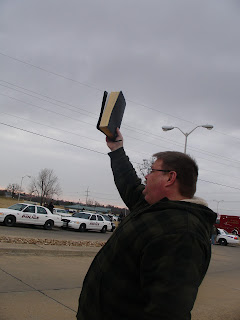 John is originally from McAlester but had spent many years in San Diego while in the navy.  He is a cancer survivor and 16 months ago his partner died.  He decided to come back “home”.  He told me that since his return he had encountered nothing but kindness and acceptance.
That’s as it should be.  Way to go, McAlester. 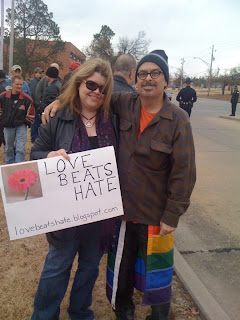 We decided that perhaps the worst part was seeing the children that the WBC protesters bring with them to these events.  These young children stand there holding hateful signs, yet looking totally embarrassed.  I felt so very sorry for them.  What chance do they have?  We were also thoroughly disgusted by the female protester who, just prior to leaving the final site, dramatically spit on the American flag she had been dragging around on the ground and wiped her bottom with it.  They are simply the most despicable folks I’ve ever encountered.

After it was over and police promptly escorted them out of town (good riddance!) we bid our new friend, John, goodbye and headed for home.  We all agreed that it had been totally worth the drive and standing out in the cold in order to counter hate with our own messages of love.

Heather made this sign just for giggles –
we didn’t carry it at the protest. 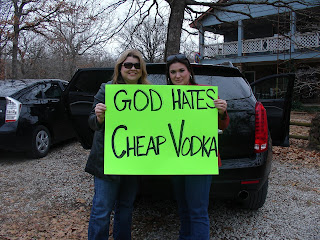 (Bit of background: Heather and I are known for being picky about the vodka in our Cape Cods.
She’s a Grey Goose girl while I prefer Ketel One.)
Another sign which was just for fun.
Not only does this reference the tire slashing event but
Heather has had several flat tires herself this past year. 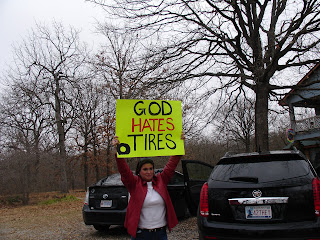 I was photographed by a couple of news organizations and interviewed by the Tulsa World.  So far I haven’t seen those anywhere (which is fine by me!) but here are a couple of articles I’ve found so far: