As David and I stood on the platform waiting to board our train Thursday morning, the following quote from George Bailey in “It’s a Wonderful Life” came to mind:

George: You know what the three most exciting sounds in the world are?
Uncle Billy: Uh, huh. Breakfast is served, lunch is served, dinner is…
George: No, no, no, no! Anchor chains, plane motors and train whistles.

I rode a train once as a young child along with my aunt and cousin. I recall enjoying the experience but not too many details other than going through the doors between cars on our way to the dining car. We also did a short ride in Branson when the kids were young and then took them on the Amtrak from Pauls Valley to Fort Worth when they were a little older. David and I have often talked about taking a long train trip somewhere so when he suggested we take the train to Austin I was pretty excited.
I was going to blog about our whole long weekend trip in one post but it turns out I have several really cool train pictures to share so I’ll tell you about the rest tomorrow.
We awakened early Thursday morning to cold rain but at least it was above freezing – just barely! There was still snow on the ground from the previous day’s surprise snowstorm but the roads were fine. We left early just in case so we arrived at our station in Pauls Valley with plenty of time to spare.
Here is a picture of the old depot which is now a museum: 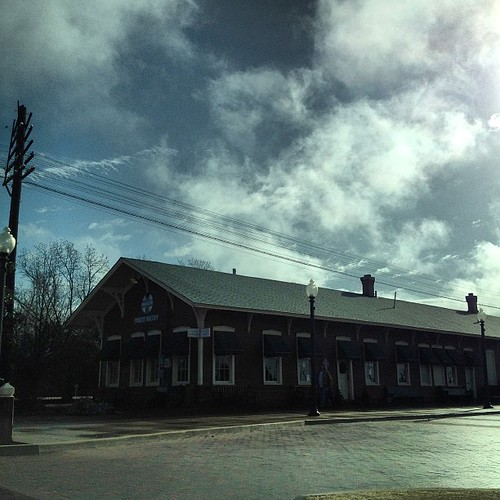 Our train left at about 9:30 a.m. Only a handful of people boarded at our station and the train wasn’t very full at all. We settled into our comfortable seats – so much better than on a plane! I had brought some hot tea with me and something to read: 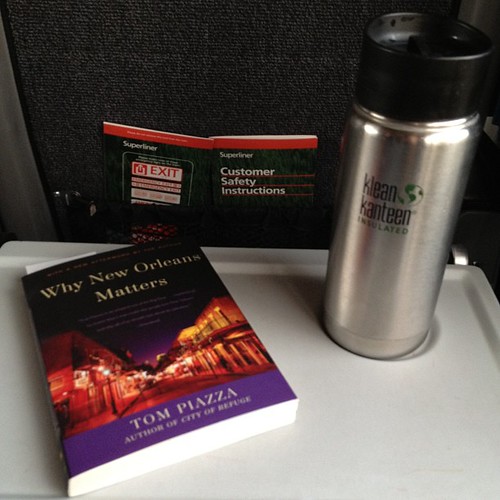 This is the back side of the depot in Pauls Valley: 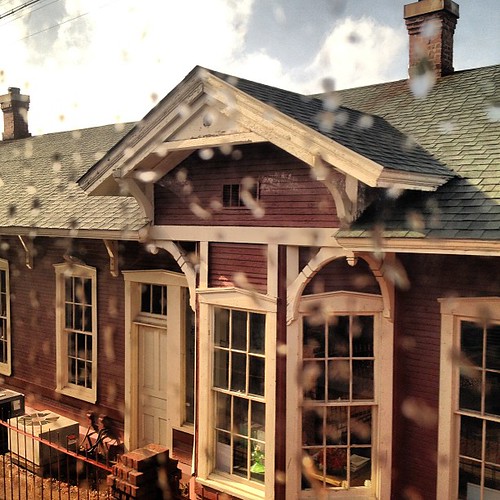 Here is the Ardmore, Oklahoma station taken from inside the train: 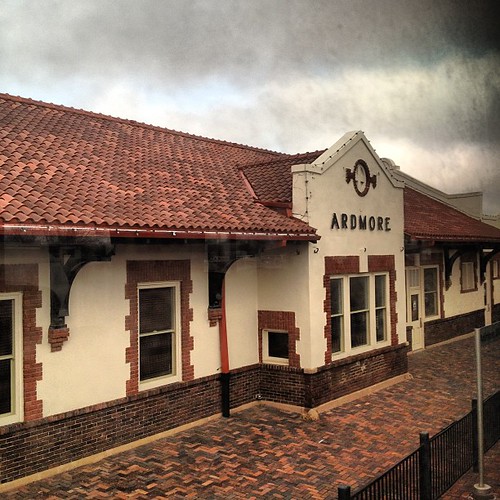 Here is our approach into Fort Worth, Texas: 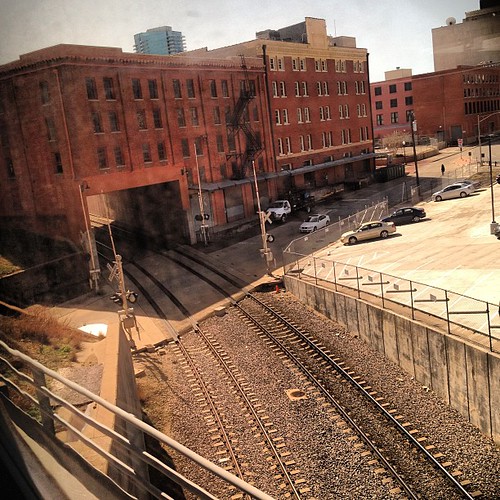 And the station itself in Fort Worth: 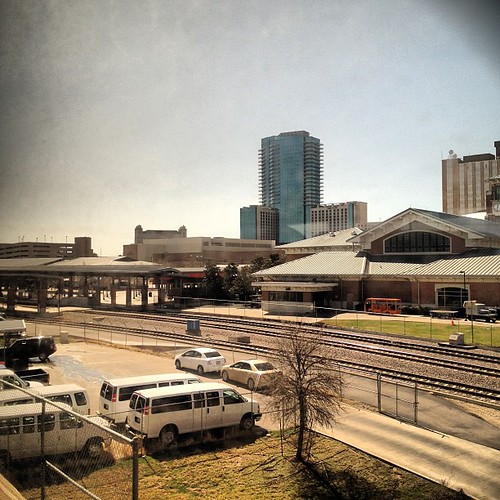 We had a two hour layover in Fort Worth. Despite the way the picture above looks, it was a sunny day and fairly warm. We walked a few blocks to a little cafe where we ate lunch. We then walked back to the station and sat outdoors until our next train arrived. It was warm enough that I took off my sweater, rolled up the sleeves on my t-shirt and got a little sun on my arms. I am SO ready for winter to be over!
Back on the train, we read, listened to music, chatted, and just gazed at the scenery: 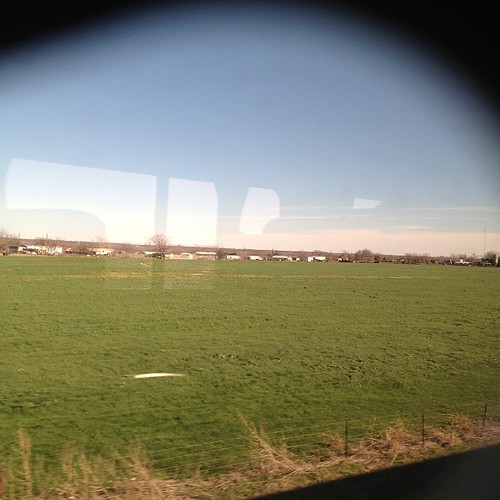 Or I should say, that is what *I* did. David logged a total of 51 work-related phone calls. Yes, FIFTY-ONE calls. Poor guy. The other people in our car were actually sorry for him and as we disembarked one gentleman told David as we walked by that he sure hoped he would be able to enjoy the rest of his vacation.
Still, even for David there were moments like this: 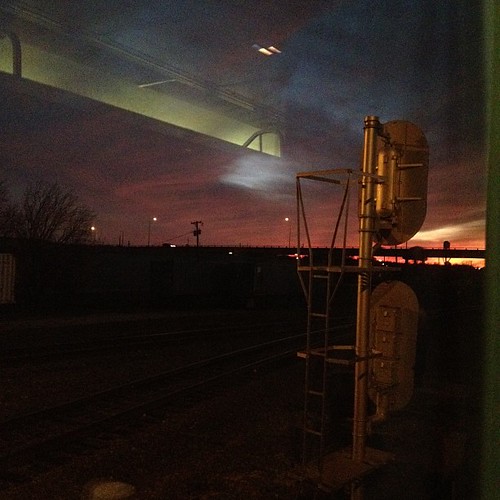 We witnessed one of the most glorious sunsets. It was on the opposite side of the train from our seats so we couldn’t get good photos of it. The one above was actually taken on our side, which just shows how much of the sky was lit up. It was truly spectacular.
We arrived in Austin around 7:30 p.m.  This is the train we had been on: 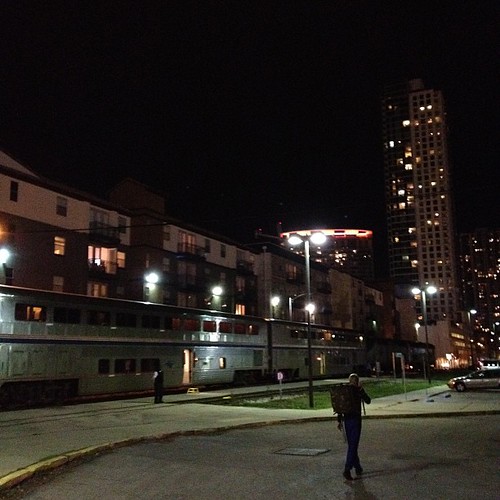 As I said, I’ll tell you all about the amazing time we had in Austin in another post but here are the pictures I took on our return trip. This one was taken while waiting for our train Sunday morning in Austin: 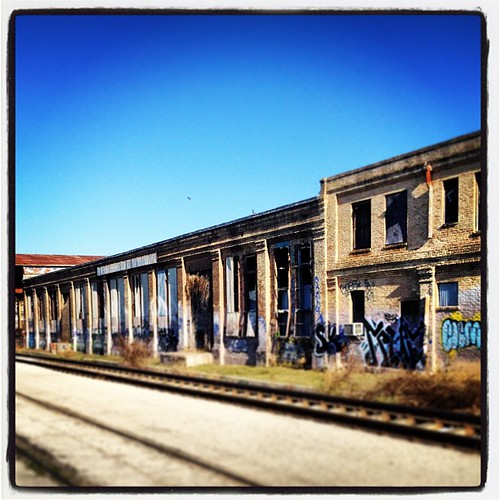 Here’s David waiting his turn to show the conductor our ticket: 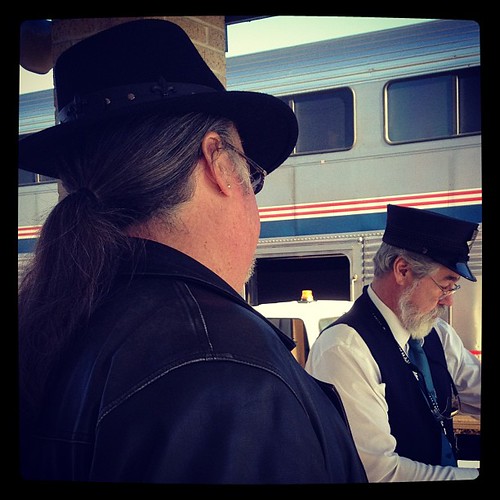 This was taken from the train at the station in Temple, Texas: 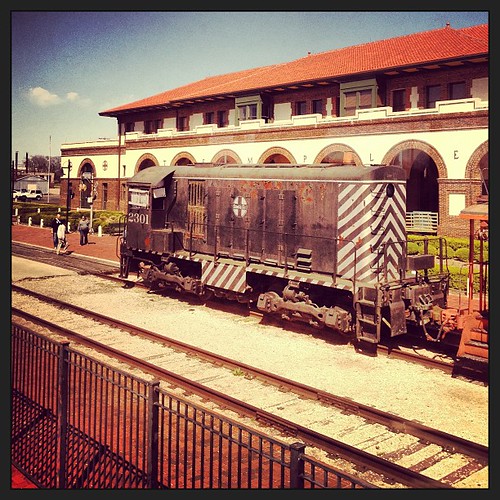 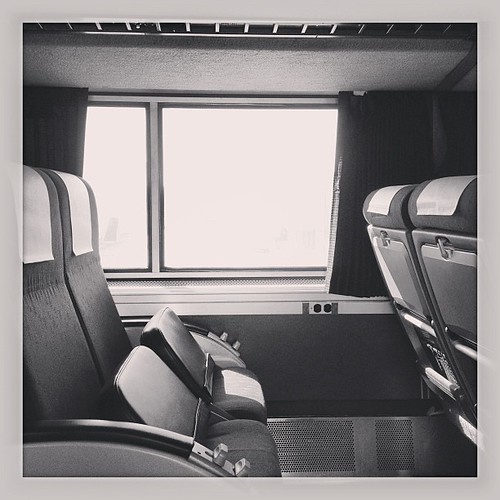 This is an old train car on display at the Fort Worth station. I used a couple of filters on Snapseed, a photo app I have on my phone. I love the way it turned out: 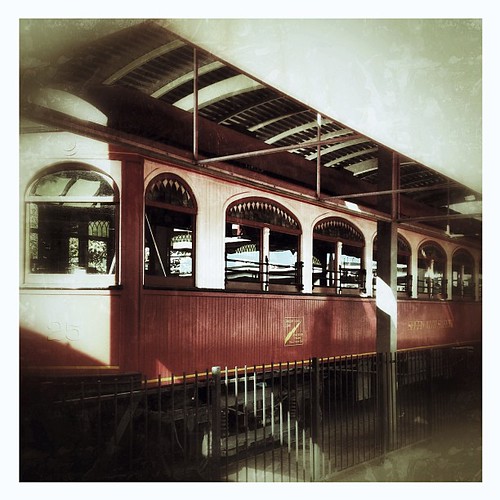 We had around a three hour layover in Fort Worth on the return trip but since it was sunny and 70 degrees I didn’t much mind. Once again I soaked up some sun and my shoulders are even a little pink.
There were some delays along the way so our train didn’t arrive in Pauls Valley until somewhere between 8:30 and 9:00 p.m. and then we had the hour drive home. We were utterly exhausted, not because of the train ride, but because we had been out until about 3:30 a.m. the night before and then David’s phone rang at 7:11 a.m. Yes, it was work-related. I’m just glad I’m not likely to see any of the people from the train ride because I kept dosing off and then waking myself up snoring. Oh, well.
Now David and I are even more convinced we want to take a long, scenic train trip, maybe along the coast of California. I do believe we have been entranced by the romance of train travel.