It’s Day Two of my “30 Day Challenge” and I chose to clean and organize my spice cabinet.  As  you can see, I have a fairly extensive collection of herbs and spices:

Here they are sitting out on the counter.  I sorted through them all and found a few duplicates which I could combine in one container.  I also found a bottle of cilantro leaves.  I have no idea why since I despise cilantro.  My mom, however, loves it so she will be the recipient of that one.  I found a few items I’m low on so I added those to my grocery list.  Finally, I combined several items that I had tiny amounts of, added some salt and made a sort of all-purpose seasoning mix.  It’s the sort of thing that will work just fine in a nice vegetable soup so I can use it up that way over the winter.

And here’s the newly cleaned and organized spice cabinet.  The most frequently used items are on the bottom shelf or right at the front of the other shelves.  Oh, and all those sticky notes on the back of the door?  Those are recipes.  I need to take them all down, sort through them and then replace just the most frequently used ones.  But that’s a project for another day. 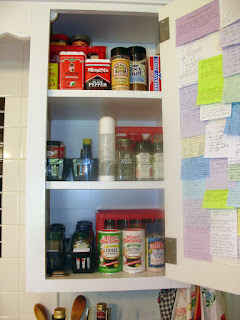 So, anyone else thinking about taking on a similar project?  Come on, it’s actually sort of fun and at least I have something to show for my efforts…something that will hopefully last a little while.