*UPDATED:  Scroll to the bottom of the post for an important addition.

I think I’ve mentioned before that I’m a member of the Yahoo Group, “French Chic”.  In fact, the idea for “French Fridays” came from that group.  Sometimes members will share what they did to make their Fridays special.  Recently, a member of the group took it a step further and planned what she called a “French-cation”.  She had a few days off and rather than go someplace, decided to save the money toward future travels and vacation at home.  She made sure she was caught up with housework beforehand and then spent the next few days enjoying herself in a distinctly French fashion.

I thought this was an excellent idea and decided that I would follow her lead by giving myself a little mini-vacation à la Française.  I spent the previous days this week working hard around the house so I could feel okay about taking the day off.  I thought about how I’d like to spend my day and made a list so I wouldn’t forget and just get caught up in playing on the computer.  In fact, that was a key component of my plan – minimal computer time.

I started the day as usual, putting away the clean dishes from the night before, packing lunches for my son and husband, and making my usual cup of Earl Grey.  Yeah, I know…that’s not terribly French. 😉  I did allow myself time to read emails, wish Facebook friends “Happy Birthday”, and do a last-minute review of this Sunday’s church bulletin before sending it to be printed (we are currently without a church secretary so I’ve taken on this duty).

I’m not a big breakfast eater but I bought some croissants yesterday and prepared a nice “petit déjeuner”: 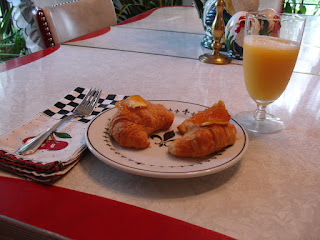 Then there were the morning tasks of feeding the cats, letting out the chickens and refilling their water, refilling the parakeet’s food, emptying waste baskets and making the bed.  There were two jobs I didn’t finish yesterday so I mopped the kitchen floor and did a quick clean of the guest bathroom.

With the house in order I then showered, dressed and did my hair and makeup.  Keeping with the French theme, I wore a pretty scarf with my skirt and top.  I had just read that buns worn fairly high on the head, ballerina-style, are showing up on the runway and in the fashion magazines so I put my hair up.  I even donned a pair of wedge heels rather than my usual Birkenstocks (I have both an inner French girl and an inner hippie!).

I rarely go to town just for fun.  I generally plan my shopping and errands to coincide with times I need to be in town for such things as board meetings, choir rehearsal and church.  I don’t like to waste gas and I’m also a bit of a hermit so most of the time I spend my days at home.  But today I decided to make my day a little different.

I started with a stop at the library.  I had a book to return and wanted to find some decorating books for a bit of inspiration.  I also hoped to find some French music cds but wasn’t terribly surprised that our small-town library didn’t have any.  Next on my list was the used book store but for some unknown reason, it was closed.

I then went to an antique store on Main Street.  It’s one of those places absolutely chock-a-block with everything from costume jewelry to china.  There were several items I was looking for and after a half hour or so of browsing, I did locate a few things, including a couple of lidded refrigerator containers and a pretty lacy cloth for the antique table in our entry hall.

A French-inspired day wouldn’t be complete without a loaf of French bread and I had called our favorite restaurant yesterday to have a fresh loaf saved for me.  I went in to pick it up and George, the restaurant owner, was the one who greeted me.  He’s such a sweetheart and he wouldn’t even let me pay for the bread.  Wasn’t that nice?

Now for a little treat for myself, I went to the florist and picked out two beautiful roses.  I much prefer arranging my own flowers and it’s a lot cheaper, too.  Across the street from the florist is the liquor store so I ran in to pick up a bottle of wine.  And just one more stop – the chocolate shop!  We have a wonderful little place that makes delectable treats made without preservatives.  I adore their dark chocolate, espresso “melt-aways”, little bite-size morsels of heaven.  I bought a small bag of melt-aways and happily accepted the free sample offered.  It was “hot fudge” flavored and I enjoyed it in the car on the way home because by this point, it was after 1 p.m. and I was getting rather hungry.

At home, I put away my purchases, after photographing them, of course:

I hadn’t finished my last Netflix movie in time to get a French film so I watched “Le Divorce”, a charming movie I’ve seen a few times but always enjoy for the glimpses of Paris and French life.

Here is a picture of my desk and the pretty flowers I bought after I arranged them in a vase.  You can’t tell from the picture but my calendar has a picture of the Eiffel Tower on it: 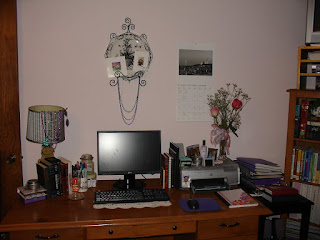 It wasn’t long after finishing the movie that David and Chris came home and it was time to start dinner.  I didn’t prepare a traditionally French dinner (a little difficult since we are eating a vegetarian diet) but I think the spirit of the French was evident in the use of fresh ingredients well-prepared.  Our meal consisted of a roasted potato/onion/bell pepper dish seasoned with olive oil and Herbs de Provence, cauliflower with a cheese sauce, glazed carrots, asparagus, salad and French bread with real butter, bien sur: 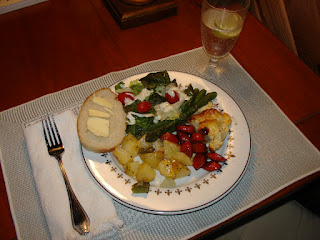 It’s now 9:45 p.m. and I’m writing this while watching the MSNBC Brian Williams special about New Orleans, while sipping a cup of tea and munching a couple of Pepperidge Farm Milano cookies, the only store-bought cookie I like.  I hadn’t had any in a few years but picked up a bag of them especially for my “French Friday”.  I had planned to buy another little treat I haven’t had in many years.  As a young bride, fresh from our honeymoon to New Orleans and with my interest in all-things-French heightened, I would buy those little cans of Café Au Lait (later named Café Française) made by General Foods International.  I was not a coffee drinker in those days so that was as close as I could get to the real thing.  As one of those for whom taste can bring back memories, I thought it would be fun to buy some for my French Fridays.  However, I couldn’t resist sneaking a peak at the ingredients and after doing so, I simply could not bring myself to purchase it.  Besides, the cans aren’t nearly as attractive as they used to be so I couldn’t even justify it based on that count.  I suppose that’s one memory I’ll have to leave in the past.

It’s been a lovely day and I think I just might have to do something similar next Friday.  Now I’m going to get myself another cup of tea, get in bed and read awhile.  Bonne nuit, mes amis!

*UPDATE:  It was brought to my attention by one of my readers that I left out something important.  I mentioned getting books at the library but didn’t tell you the titles.  Shame on me.  For my fellow-book-aholics: