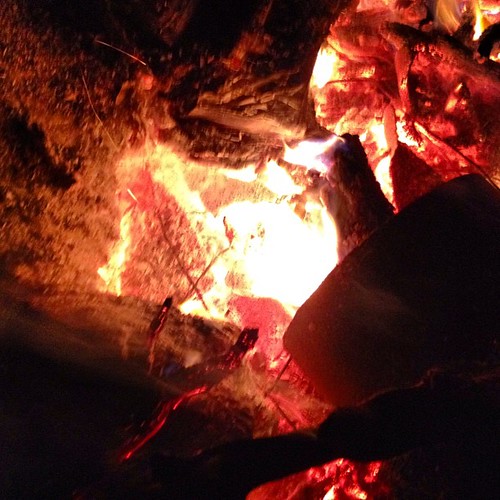 The bright glow of fire. I’ve been wanting to toast marshmallows and make s’mores for weeks and we just never seemed to get around to it. Our temperatures are supposed to take a nose-dive later this weekend so I figured now was our chance.
We have a burn pit where David tosses wood and branches. He also had put in several boxes of old files from work so we had plenty of fuel for our little bonfire tonight. 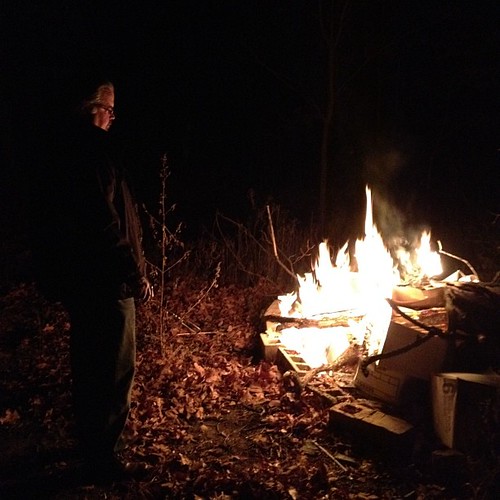 It was a bit chilly but quite still so it was warm enough by the fire. David brought out a couple of chairs for us and after we enjoyed our s’mores we sat by the fire for a couple of hours. There’s something positively mesmerizing about a fire. I love watching the flames licking at the wood and the sparks flying into the air when the fire is stirred. It was a bit cloudy when we first went out but eventually the sky cleared and we were treated to a gorgeous starry night.
Shiloh hung out with us for awhile but the popping of the fire scared him – poor guy- so David took him on a walk and put him back inside. After the fire was mostly burned down, David brought the hose over and finished putting it out. Now we are back inside our warm and cosy house. I made us each a cup of tea to warm us up and pretty soon I think we’ll call it a night.