I’m still processing and recovering from our trip to New Orleans but I just had to share a few pirate pictures. I can honestly say these are some of the best people on the planet. Even if they are a bit crazy. Or maybe because of it. But truly, I cannot imagine a better group of folks. Kind, generous, and heaps of fun.
We had a lovely pirate dinner one evening, attended by over 50 pirates. It was a gorgeous venue with views of the river and the French Quarter. Here is our infamous “Pink Pirate” gazing out toward the river: 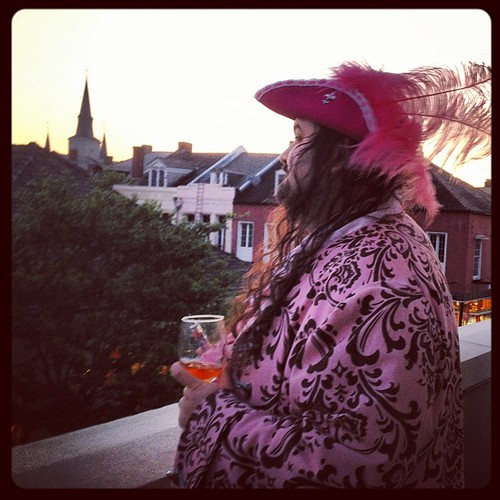 A little pre-dinner socializing on the veranda: 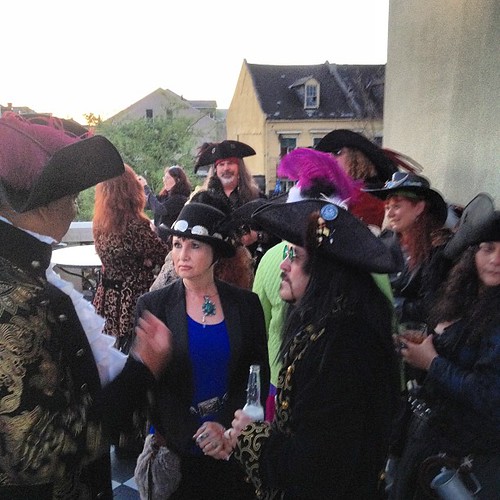 One of the best parts about being a pirate/wench is getting to know people from all over the country. Captain Ron stumbled upon our humble “krewe” a couple of years ago as he set out on a road trip from his home in Florida. He had recently lost his beloved wife and we all gathered him to our collective bosom and adopted him as one of our own. On at least three or four nights, Ron, David and I hung out together until the wee hours of the morning when we’d finally end up at the Clover Grill for biscuits and gravy or whatever else sounded good at the time. Here are the two guys, affectionately known as Captain Smartass and Captain Ron: 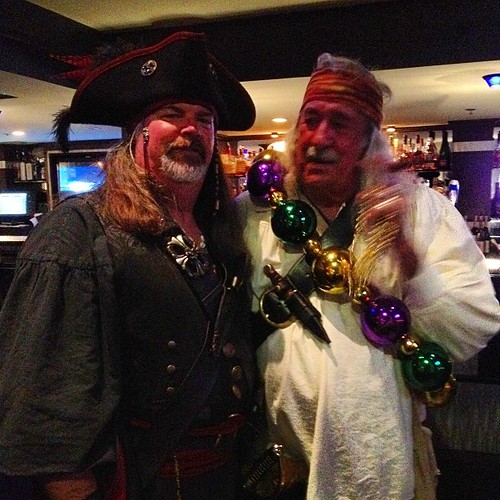 I love these guys…and this picture: 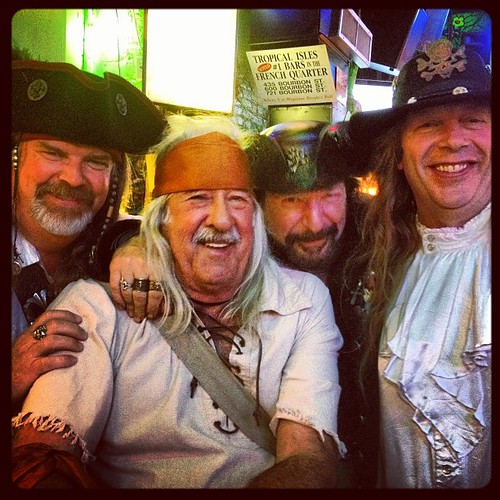 Captain Ron brought with him what turned out to be the hit of the party – Pirate Dice. I love this picture. They may be using plastic cups for the game but notice most everyone is drinking from their own tankard. Aye, we be environmentally friendly pirates. I also like the way everyone has their weapons on the table. The best part is that the one woman playing won almost every game and earned her new name, “Lady Luck” (no, it wasn’t me). 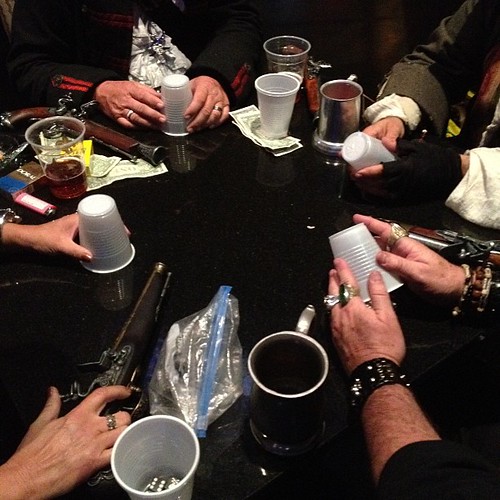 One of the fun things we did was to board the Natchez steamboat in full regalia for a 2 hour cruise on the Mississippi. The tourists didn’t know they’d be sharing the boat with dozens of pirates but we behaved admirably. Or at least as well as can be expected.

The four day “Shore Leave” event also included a “Meet and Greet”, pirate trivia, bead tossing, silent auction (I’ll have to do another post with a picture of what David bought), pub crawl through the Quarter, and a crawfish boil at Turtle Bay on Sunday as we all sadly bid one another adieu. But plans for next year are already in the works!