Have you heard of soap nuts?  They aren’t really nuts but rather, a berry.  Completely natural, kind to the environment and CHEAP.  I’ve used Amway laundry detergent for 30 years and have always been happy with it.  It was one of the very first to be made without all the fillers and is phosphate-free.  It’s been rated as perhaps the very best in performance but it’s also pretty expensive.

As part of my quest to “go green”, as well as to save money, I decided to follow my daughter’s lead and try soap nuts.  Lisa gave me some to try a couple of weeks ago.  I tried it on David’s shirts, figuring that he wouldn’t care one way or the other. 😉  I also decided to substitute white vinegar for Downy.  I had done that on occasion in the past but I must admit I’m rather partial to the fragrance of Downy.  Anyway, when I pulled the shirts from the washer I smelled them.  I was astounded by how fresh and clean they smelled.  There was no fragrance but they just smelled *clean*.  Next I tried it with our sheets and again, I was very pleased with the results.

So I placed an order on Amazon and in a couple of days received my shipment.  I figured out the cost per use and with the quantity I purchased, it comes to around 7 cents a load.  Amway was about 30 cents per load, as I recall.

You can just toss the soap nuts in the little muslin bag that comes with them into the washer but my understanding is that it might be a little more effective to make a liquid and use that.  Following Lisa’s suggestion, last night I boiled 4 cups of water and poured it over 8 soap nuts, leaving it overnight.  This morning I decanted the soapy liquid into an old Perrier bottle.  Because there are no preservatives, it is recommended that you keep the liquid in the refrigerator.  I will be placing a large label on the bottle to designate the contents! 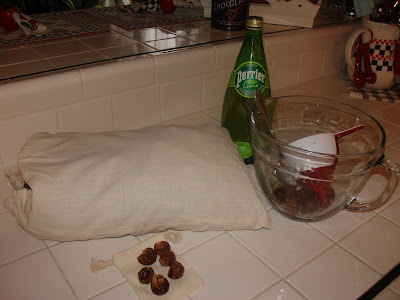 Here is a close-up of the soap nuts:

What laundry detergent do you use? Have you ever tried soap nuts? After reading this, would you consider giving them a try?