Last week Gentilly (aka “Tilly”) had her babies. I’d been suggesting she just have three rather than the five or six our cats generally like to have. She did pretty good and just had four. Most of our cats have been mostly black. We’ve had the occasional striped kitty and a gray one (poor Gracie – sad story, don’t want to think about it). Never have we had any white ones but as you can see in the picture, we did this time. I didn’t want to disturb them for this first picture taken when they were just a few hours old but there are two white kittens, a gray, and a gray striped. No black ones this time!

Tilly is a good mama and the babies are getting cute. I’ll try to get a good photo and share it tomorrow. 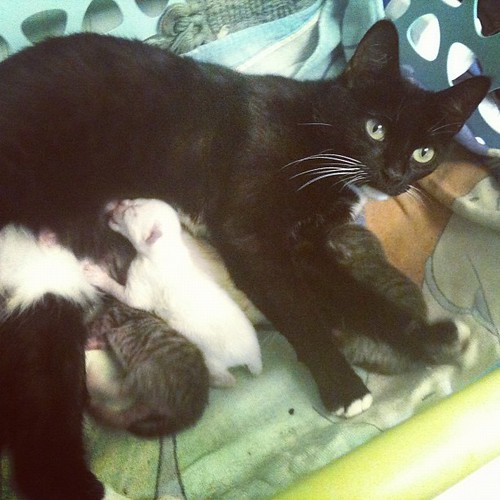 Springtime on Apple Tree Farm also means getting ready to plant my garden. I’ve been working a little at a time removing the stubborn grass and weeds from the first of my raised beds. Ordinarily I wouldn’t plant until after Easter – that’s what my grandma always told me – but I feel pretty certain we’ve seen the last of winter here in southeastern Oklahoma. We will be in New Orleans April 12-24 and I don’t want to leave too much extra work for Chris to take care of while we are away so I’m only going to plant a couple of tomato plants before we go. I’m hopeful that with this early spring I might have the first tomatoes by early June. Mmm…nothing like a home-grown tomato still warm from the sun. As you can see, Calliope likes to *help* me garden. In fact, I usually have two or three cats out with me. 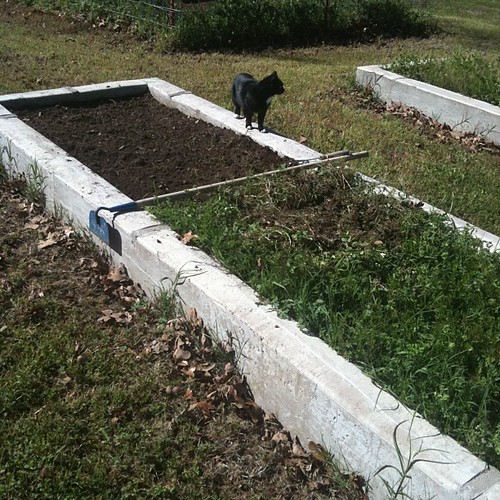 And speaking of helpers…here’s our beautiful Shiloh (and Liz in the grass behind him). As you can see, he still has the external fixator on his front leg. Our vet says the bone is calcifying well and the plan is to remove the pins and fixator sometime after we return from New Orleans. He’s been putting more weight on the leg and everyone is confident that he will have a full recovery. He is absolutely the sweetest dog on the planet. Everyone who meets him falls head over heels in love. I feel so fortunate that we were able to adopt him. 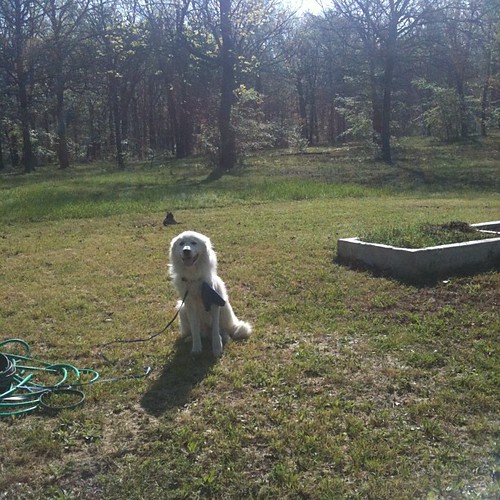 I’m really excited about spring and enjoying the time outdoors, despite the allergies. In addition to the garden, I’m also planning to plant a few fruit trees. At one time I had planned to have an orchard in the area where Liz is in the picture above (It’s a much bigger area than the picture indicates) but that’s where everyone sets up their tents during our annual Happyland Music Festival. Then I got a brilliant idea the other day. I’m going to plant a few fruit trees around the outside of the chicken pen. They will be close enough to reach with the hose to water and will eventually provide shade for the chickens.

And speaking of chickens, one of my cousins is going to raise some chicks for me along with his. As soon as they are big enough to be outdoors, I’ll go get them from him. This means I don’t have to raise messy chicks in the house this year. Don’t get me wrong; they are very cute and I enjoyed getting the opportunity to watch them grow. The first time. But I’ve done that a few times now and I’m perfectly happy to skip that stage. I’m just eager to have our own supply of eggs again, as well as the pleasure of taking care of my little flock.

So that’s the latest from Apple Tree Farm. What’s going on in your neck of the woods? Do you garden? I’d love to hear what Spring is like where you live.