This past Saturday we picked up the children of a friend (we actually think of her as a relative) who were in town visiting their grandparents and took them to visit David’s fire station. Noah wants to be a firefighter and had been eagerly awaiting this little field trip. 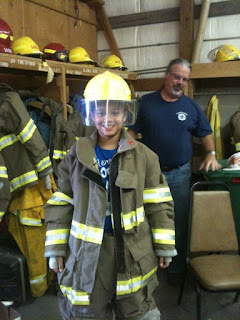 Trying on the air pack

Let’s go for a ride.

Sister, Kellyn, likes it, too.

Explaining the force of the water

Checking out the older trucks

We spent nearly an hour and a half at the station. David did a great job explaining everything and I learned a lot, too. I told him he should host field trips for schools and homeschool kids. He’s really good with kids and they all love him.

We truly enjoyed the time with Noah and Kellyn. They were polite, charming, engaged and so eager to learn. What a pleasure to be with! After all that time in the 108 degree temperatures, I suggested sno-cones, which went over well with all of us.

We then returned the kids to their grandparents and went out for a late lunch. We had planned to have a quiet evening at home but around 8:45 David got called out to a fire. Ah, well…such is the life of a firefighter. I had been asked to make finger sandwiches for the Retired Teachers Luncheon that our church hosts each year. I decided that since David was going to be gone anyway I’d go make the sandwiches in the church kitchen so I could arrange them directly on the serving tray they would be using. While I was there I did some cleaning of the kitchen to help out the dear lady who takes care of all these activities at church.  I got home around 10:45 and David returned from the fire at about 1 a.m. We decided to skip church Sunday morning and basically spent the entire day lounging around.  David watched bits and pieces of various movies – for some reason he likes watching the last 20 minutes of things – and I watched numerous episodes of I Love Lucy which were being shown as a marathon. We never even got dressed. Which is something you just have to do once in awhile.

And what did you do this weekend?