Yesterday was our 31st wedding anniversary. Sadly, David has been out of town this week on business but he had these gorgeous flowers delivered: 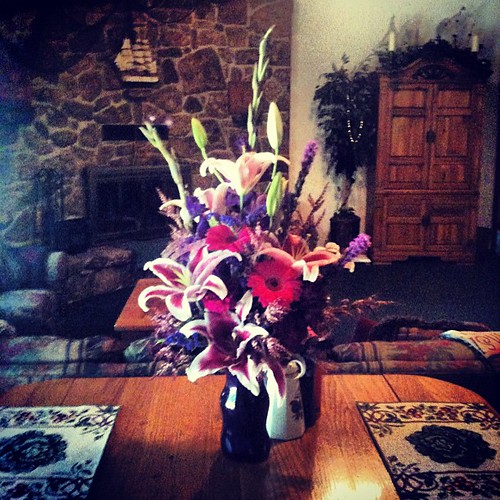 I wish you could see them in person because the picture doesn’t do them justice. Plus, they smell fantastic!
As much as I’d rather have him with me this week, I can’t complain (too much) after the wonderful weekend we had. David took me to our beloved Skirvin Hotel for three nights. I just love that place. 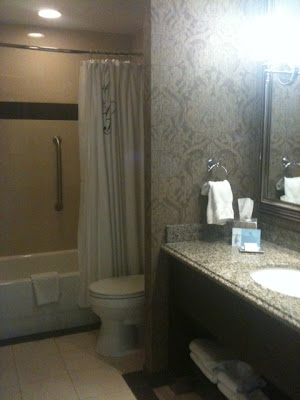 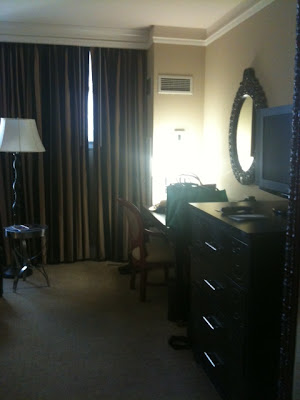 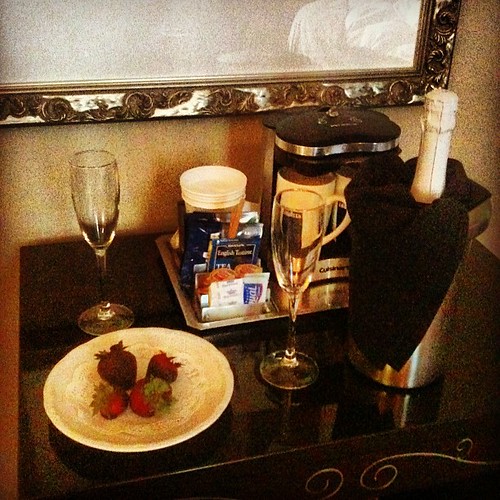 And the timing was even okay. 😉

We then went downstairs to the Red Piano Lounge where I ordered my favorite cocktail: 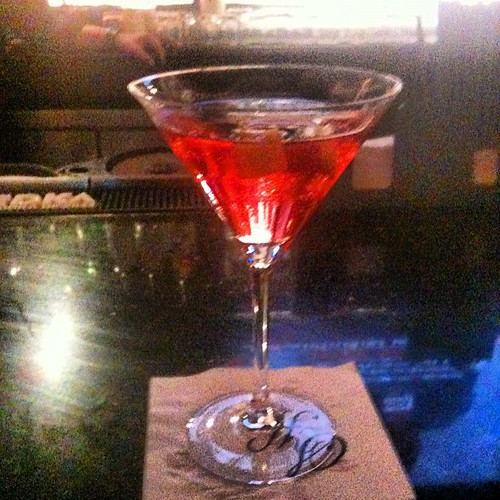 Saturday afternoon we decided to leave the room. We needed some food and decided to go see a movie. It was fun to see all the businesses promoting the Thunder basketball team. Thunder up!

We went to the Warren Theater in Moore to see “Rock of Ages”. We love this theater where you can order (rather good) food and drinks right at your seat.  The movie was fun and of course, the music was good. In fact, I made a Spotify playlist of the original versions of the songs in the movie. If you have Spotify (and you really should), check it out here. 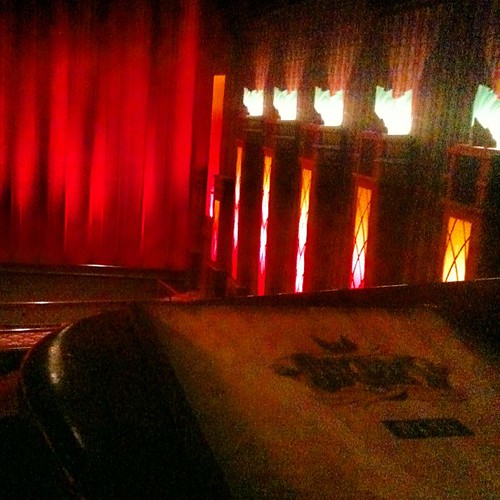 We then got the car washed and headed back to the hotel. After watching a movie like that, we decided we were in the mood to see some live music. David asked Chuck, the valet, if he had any suggestions and I posted the query on Facebook. Turns out that the annual Bricktown Blues and BBQ Festival was taking place. AND the daughter of a cousin’s cousin (we are all closer than that would imply) happened to be there with her boyfriend.

When we got to where it was taking place I posted this picture of our location and asked where Sarah and her boyfriend were sitting. Well, it just so happened that they had fantastic seats on the balcony of an adjacent Mexican restaurant. They happened to have met up with some other people from Ada and were sitting with them. And we just happened to know three of the four. It was a gorgeous night and we thoroughly enjoyed listening to the blues while sipping our drinks. 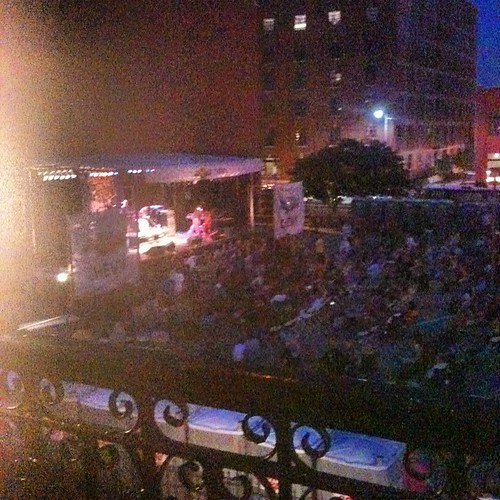 After the music was over we walked a couple of blocks in search of a blues club we had heard of. The directions on David’s phone were wrong but we ended up at an IHOP. Since we hadn’t eaten anything since our late lunch at the movies we decided to eat there. They were short-handed in the kitchen so it took awhile to get our (mediocre) food, but our waitress was sweet and we did get to witness a large table of black women sing their own version of “happy birthday” to the guy with them. For just a moment it felt like New Orleans and I half expected everyone in that small dining room to start chatting with one another after ice breaker. There were smiles but then everyone went back to their own little worlds. Oklahomans are friendly but in a completely different way than New Orleanians. Sigh…I miss NOLA.
After we ate, we called our limo driver to pick us up. Yes, from an IHOP. We then went back to the hotel for a nightcap.
On Sunday afternoon we headed to Bricktown for lunch. It was such a nice day that we spent some time just sitting outside people watching while overlooking the riverwalk. We also worked up quite a plan for injecting a bit of excitement in the area but I’m not sure who to send it to. 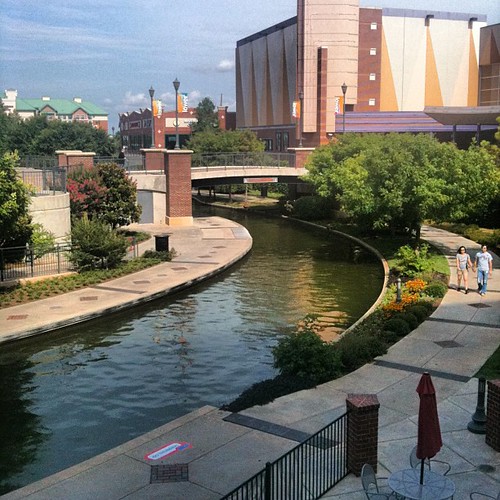 I remember what the Bricktown area was like before they began revitalizing it. They’ve really done a nice job of it, although it is a little bland and, well, too clean. Yeah, I guess I’ve spent too much time in New Orleans. 😉 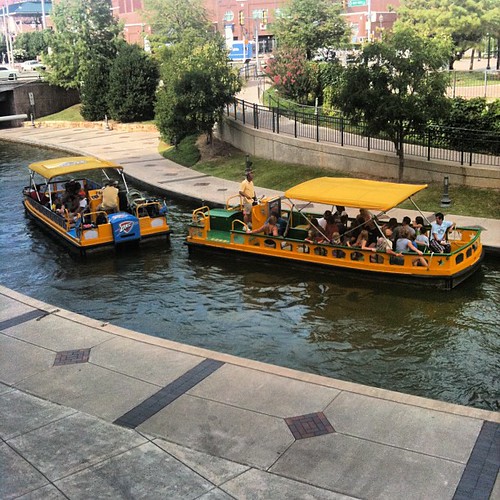 But there are little pockets of coolness: 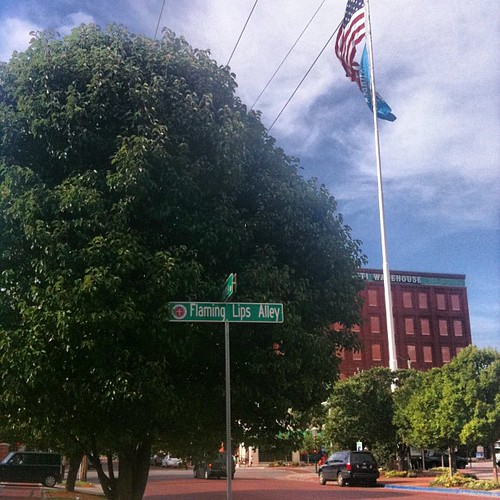 On our way back we stopped at a cool little shop that sells candy and a huge variety of unusual pop/soda/soft drinks. David got a black cherry cream soda and I got a regular cream soda then we headed for the hotel. Isn’t it lovely? And check out the Thunder banner at the top left. 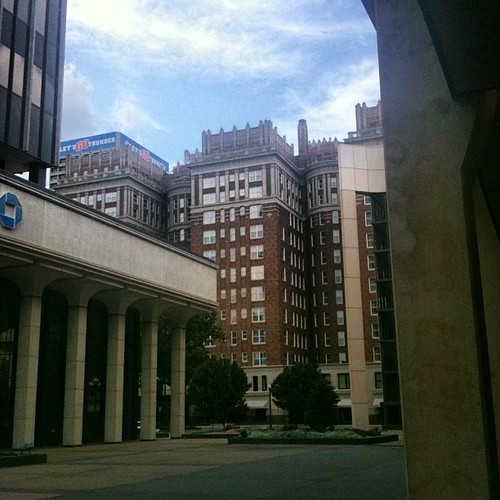 There are decorated buffalo all over the city. I tried to get David to sit on it but this was all I could get from him. 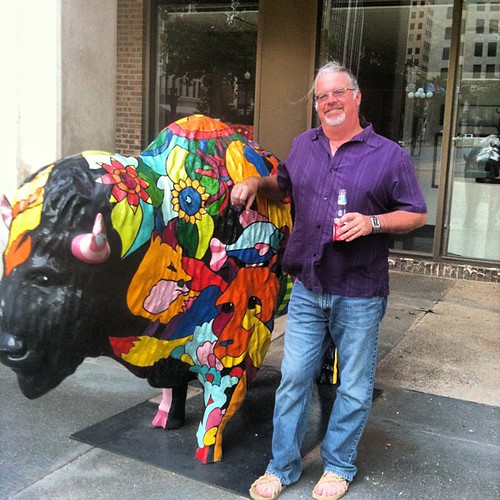 We went back to our room to change clothes then went to the Red Piano Lounge to watch the game. It really is such a gorgeous place: 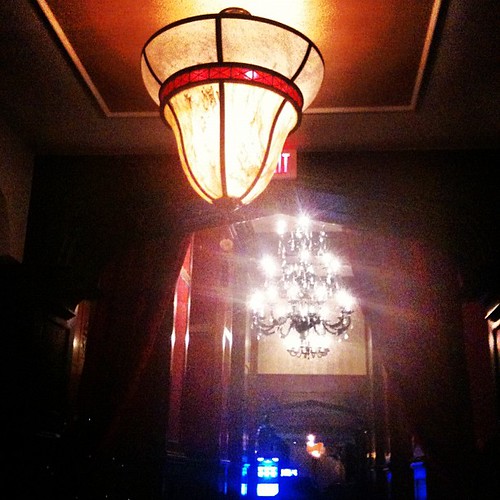 Now THIS is the way to watch a basketball game!

While we were there, a friend texted David to ask if she and some of her friends could “crash our party”. They were just a few blocks away and of course we told them to join us. They stayed for the rest of the game with us and we all had a great time, despite the fact that the Thunder lost.
And then it was Monday and I had to take my pirate to the airport. I consoled myself with a trip to the new Whole Foods in OKC. What I wouldn’t give to have one of these in Ada. Not only do they have all the sorts of foods I like to buy but it’s awfully nice to not be the only one in a long hippie skirt and Birkenstocks who brings her own reusable bags. 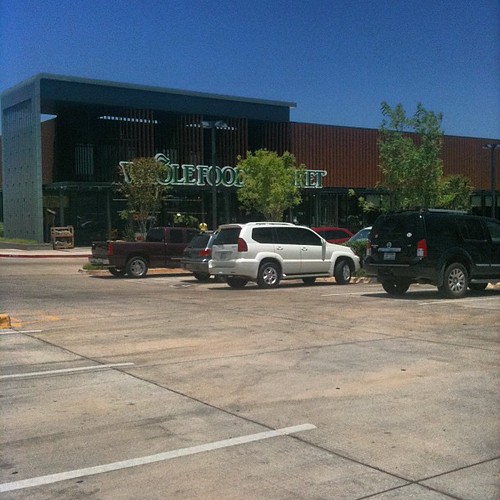 And then it was Tuesday…our actual anniversary. David called me, sent me the above-pictured flowers, and posted something really sweet on Facebook:


“Happy anniversary! I am so lucky to have been married to the most wonderful woman and best friend any man could ever ask for. If I found a genie in a bottle, a life time with you would have been my first wish. I love you and miss you.” 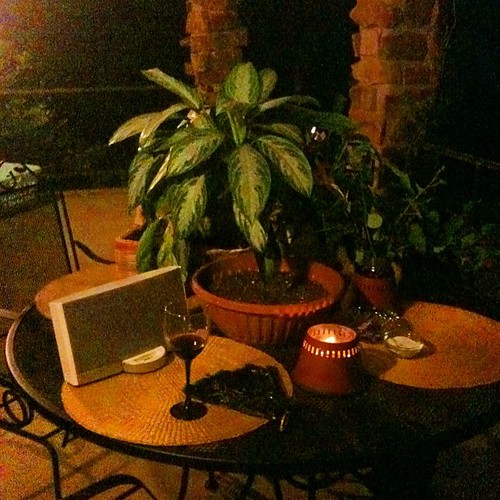 Chris and Kadi came over and watched “Running With Scissors” with me last night because they thought I might be lonely without David. Wasn’t that sweet? After they left I ended the day with some time on the porch listening to music and cuddling kittens. It was a beautiful night and all that was missing was David. But I will pick him up at the airport tomorrow and all will be well in my world again.

*Sadly, our Thunder lost to Miami tonight. But it was quite a run and so nice to have Oklahoma in the news for something positive. Next year!