All I can say is that it’s a darn good thing that groundhog didn’t see his shadow.  Rain turning to sleet turning to ice turning to snow.  That was the story here.  Oh, and I mustn’t forget the frigid temperatures and high winds.  Blizzard conditions in southeastern Oklahoma?  Not exactly the norm.  I tried to capture photos of the blowing snow but without much success.

This was taken yesterday from our bedroom, across the balcony toward our guest house: 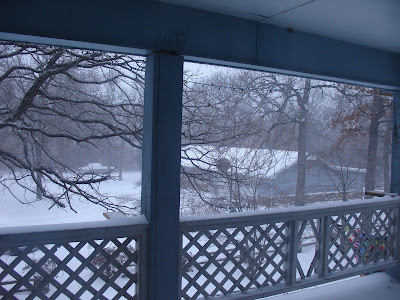 And this is looking out the sliding glass door in our family room: 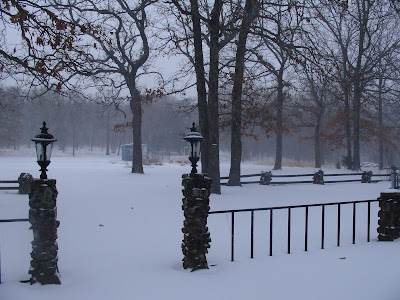 We were essentially snowed/iced in yesterday but David attempted to drive to work around noon.  A big gust of wind blew his truck off the road and caused temporary white-out conditions.  He missed a guard rail by 6 inches and then spent 3 hours there until he could be pulled out.  Two 4WD trucks couldn’t get him out but a man that lived nearby got his tractor and box blade, cleared the snow and then pulled him out.  He gave up his attempts to get to work and came home where I greeted him with a cup of hot chocolate and non-verbal “I told you sos”. 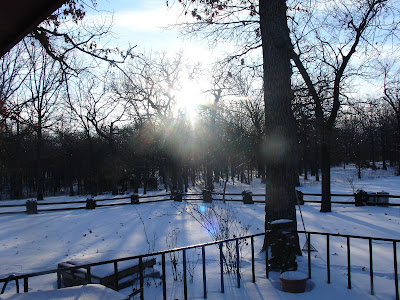 It is really pretty…from inside the house. 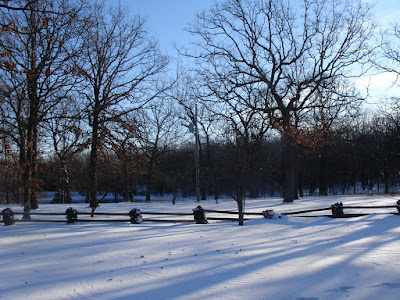 You can see just a bit of how the snow drifted due to the high winds yesterday: 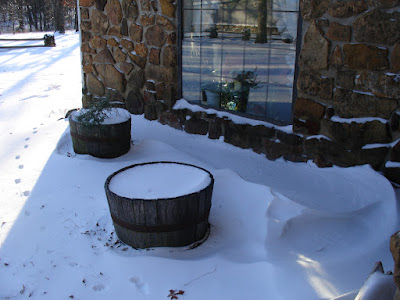 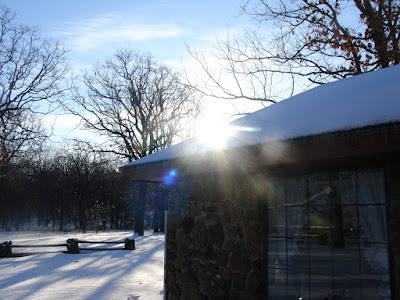 David worked from home today until around noon then he and Chris took off for work.  They made it okay but a truck spun out behind them on the highway and they had to wait for a car that had attempted a hill but ended up having to back down it again.  It’s still treacherous out there.

Me?  I’m keeping the home fires burning.  Literally.  My assignment is to keep wood on the fire.  We were lucky and didn’t lose electricity yesterday although the lights did flicker several times.  Our internet was down for several hours and my wireless-based email until today.  Fortunately we all have iPhones so we could stay connected and read everyone’s weather stories on Facebook.

It’s supposed to stay very cold and then possibly snow again Friday.  The weekend will be better but there’s another possibility of snow on Monday.  My brother who lives in the Tulsa area texted me a couple of photos of the 2-4 foot drifts in their yard.  He said it would take him a week to dig out and then he was driving to a beach.  And never coming back.  I told him I was going with him.