Without music,
life would be a mistake.
~Friedrich Nietzsche~
I’ve got a lot of catching up to do here so fair warning – this post has LOTS of pictures.
July 1st was our lovely daughter’s birthday. A bunch of us went to Vintage 22 for Trivia that night and celebrated with her. I’m usually the photo taker and rarely have any of myself. I figure someday my family might wish they had some of Mom so I asked David to take this one of me with the birthday girl. 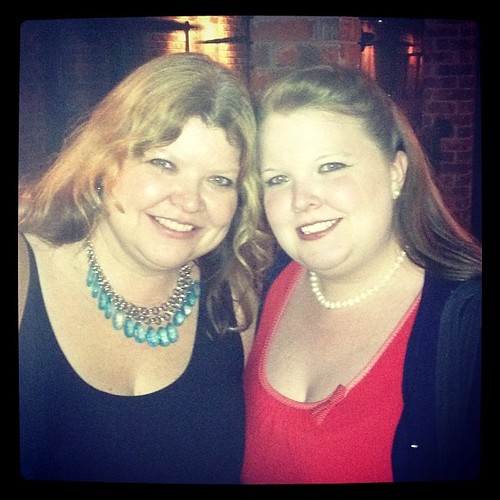 I think you can tell we are related.
Much of our time these days involves music in one way or another. Our Happyland Music Alliance business has taken off like a rocket. We are pretty excited about the fact that Ada now has a vibrant live music scene.
Last Thursday Rowdy Folk played at Papa Gjorgjo’s. We started on the patio but the mosquitos chased us inside. No worries. These two are pros and they easily switched to an “unplugged” set indoors. 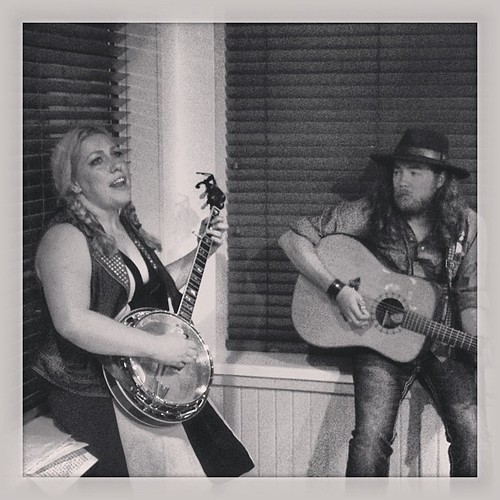 The musician who was supposed to play at Vintage 22 the next night became ill so Rowdy Folk filled in. That’s one of the great things about “the Alliance” – they all work together and cover one another when necessary. They put on another great show and even had a surprise guest. Josh used to be their drummer until he moved but he was back in town Friday. It was great fun to have the original band back together again. 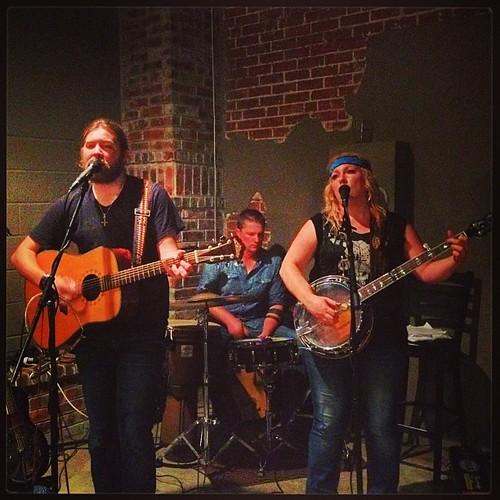 Once in awhile David likes to smoke a cigar. And show off… 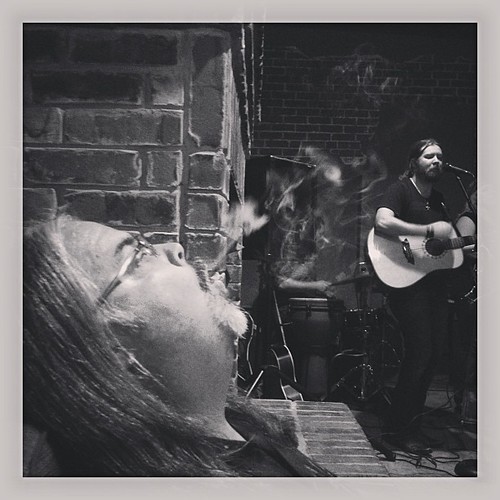 Saturday, the following night, two of our bands were playing at The FieldHouse. This was the first official show for Angela and Ashley. They haven’t decided on a band name yet but they are amazing. 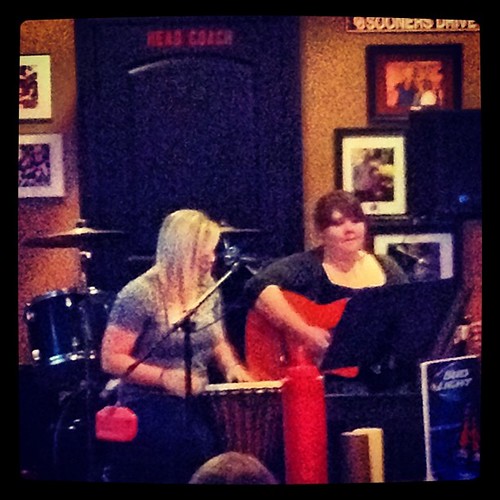 Then Moloko Litso finished out the night. Always a pleasure to hear these guys. 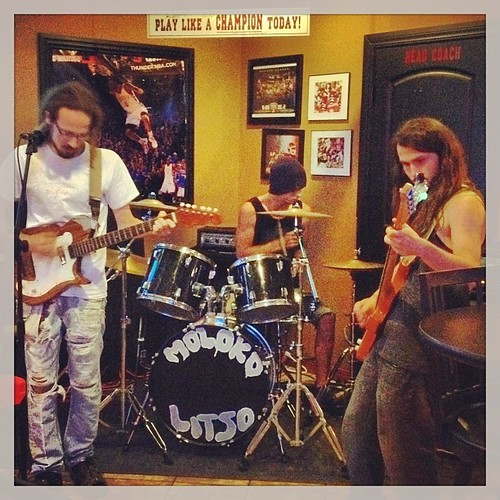 We haven’t figured out how to clone ourselves yet but it would sure come in handy on those nights we get invited to more than one event. Next up was a birthday party for the guy our niece is now dating. Will has been friends with Chris for years and we are excited that Will and Leslie are together. In fact, she got a job in Ada and is moving here! 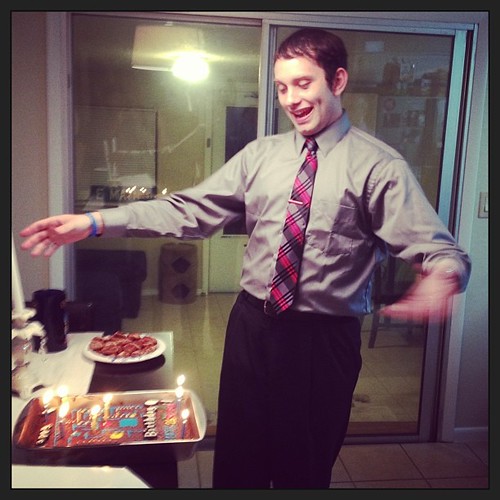 The party was still going on but we said our goodbyes around 2 a.m. since we had plans Sunday. We left town around noon and headed for Kansas City. However, we couldn’t miss the World Cup finals so we found an English pub in the Tulsa area and watched the game there. 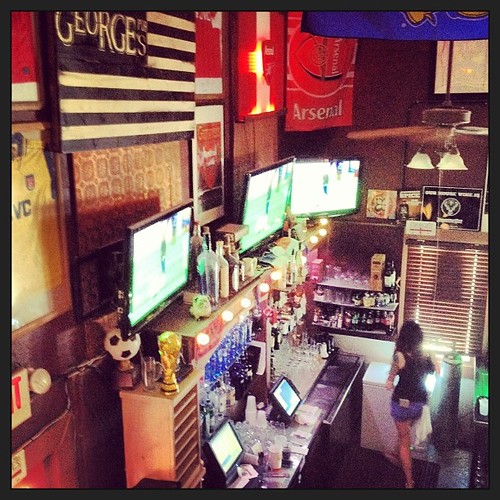 It was a great place to watch because everyone there was focused on the game and very enthusiastic. Congratulations to Germany! 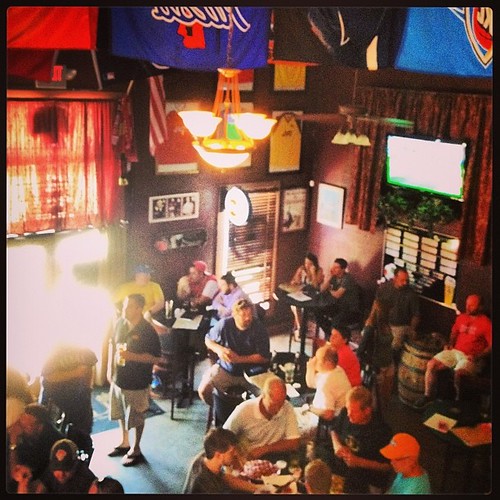 We stopped in Joplin, Missouri for dinner and finally made it to our hotel in Kansas City around 11 p.m. Yeah, we didn’t make very good time. Ha!
Monday morning David left me in the hotel room and went to his Kansas City location to do some employee training and a few other things. I worked on some things for HMA and a freelance article I was writing. After David got back, we headed out for a quick bite to eat (found a nice little pub with delicious burgers) then to the Starlight Theater, the main reason for this trip. You see, David had bought us tickets to see: 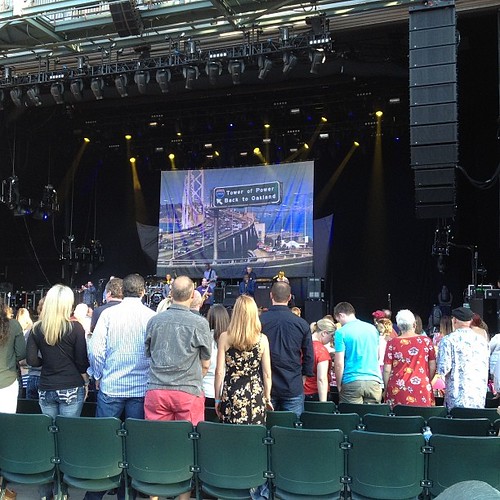 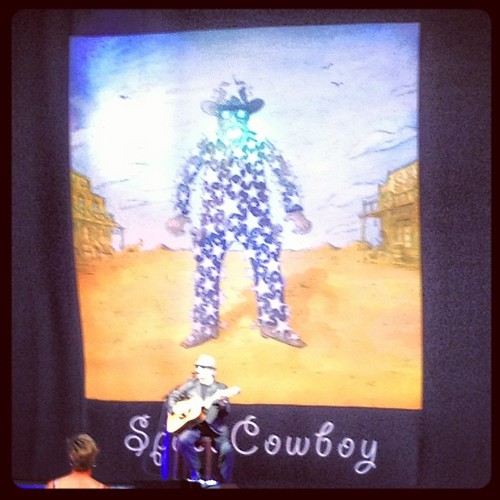 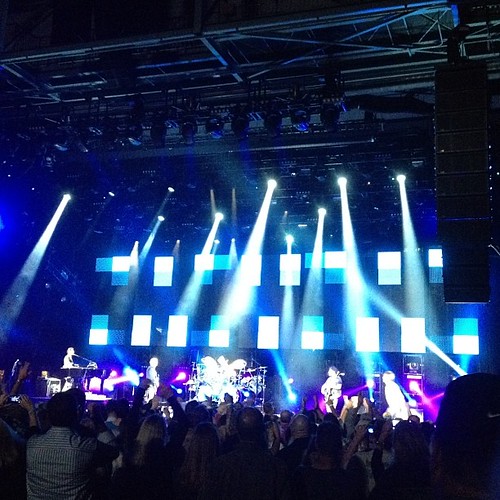 It was like a trip back in time to our high school days. So much fun! And despite being July, the temperature in the outdoor venue was actually chilly by the time the night was over. After the concert while I was in the restroom, a couple of women came up to David and asked if he was the bass player in the Steve Miller Band. That isn’t the first time he’s been mistaken for a musician. It actually happens fairly often…which he just hates (not). A couple of guys asked for his autograph in New Orleans. He asked them who they thought he was. Their response? Foghat.
It would have been nice to have another day or two in Kansas City but we had to get home. We did, however, eat lunch before we left Tuesday. Kansas City is known for barbecue so we decided that’s what we should have. David asked at for a recommendation at the front desk and that is how we ended up at Oklahoma Joe’s Barbecue. That’s right, Kansas City barbecue at a place called Oklahoma Joe’s. We waited about 40 minutes in line but it was worth it. Truly the best ribs I’ve ever tasted. Turns out Anthony Bourdain considers it one of the “13 Places to Eat Before You Die”. One down, twelve to go!
We ended up eating dinner in Seminole on our way home at a diner called Catfish Roundup. Neither of us had catfish so I can’t comment on that but I will say that anyplace which brings you hot fritters the minute you sit down and then freshly baked hot rolls throughout your meal is alright by me.
The next day Lisa and I did our July grocery shopping in OKC. You can read that post here. Then on Thursday I had a piano lesson and plans for David and I to attend the 4th Annual Grateful Dead Meet-Up At the Movies. I was pleasantly surprised when I had found out it would actually be playing at our local movie theater and had been looking forward to it. However, on my way home from piano I called David only to find out he was rushing home to get some clothes and then heading to Kansas where one of his trucks had been in a roll-over accident. Fortunately the driver was okay but he had to take the emergency response truck up there. And then if that weren’t enough, he came up on a serious vehicle accident on his way home. He stopped to help with that. As I drove by I saw him at the back of the ambulance. I rushed home and started packing for him. He ran in, finished packing while I made him a sandwich and then he rushed back out. Poor guy.
That left me without a date for the show but when Lisa heard that she offered to go with me. What a good daughter. There were only six of us in the theater. Apparently there aren’t a lot of Deadheads in Ada. But I really enjoyed the show and was so glad I didn’t have to go by myself. I would have but I’m glad I didn’t have to.
David didn’t get home until late Friday night and I actually stayed home all day. Amazing. Saturday afternoon we had a nice time chatting with our niece, Leslie, before her trip to California the following day. Then David dropped me off at a bachelorette party for a dear friend. He went out for dinner and then picked me up in time for another HMA show at The FieldHouse. Our newest members shared a show. This is Rasheed Lowery: 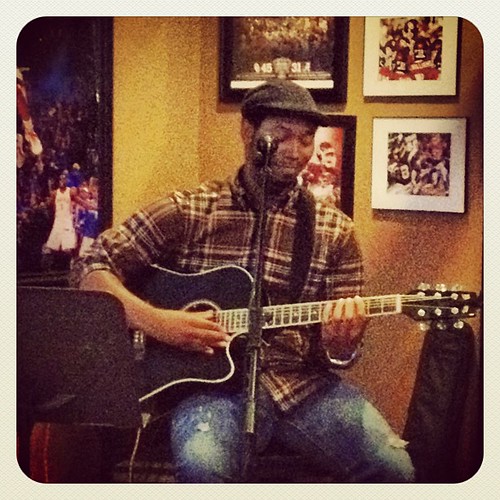 And Dirty Derringer, along with Dwight Martin on harmonica. They all did great and the place was packed. Word is spreading and people are really starting to come out for our shows. 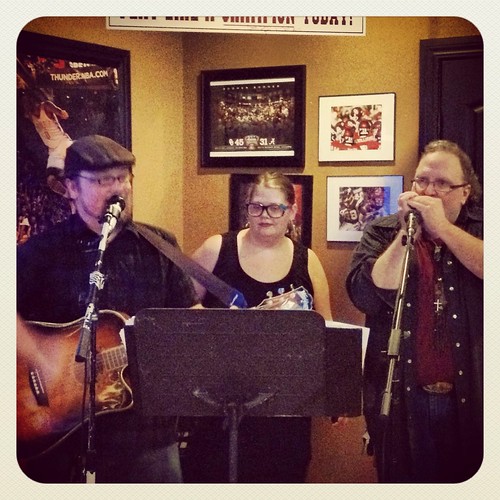 I went to church Sunday but just a few minutes before we were ready to go David got a call and had to deal with yet another emergency. This one took him to Lindsay, Oklahoma and then to Oklahoma City to check on the injured driver (he’ll be okay). I think it was about 9:30 p.m. when he finally got back home.
And that is the sort of crazy busy life we are living these days. David just told me he has to go to the city tomorrow to check on the injured driver and bring him some things in the hospital. He asked if I’d like to go along and then we’ll go out to dinner up there. Sure, why not? It’s not like I have any housework to do. Although I did manage to get my kitchen mopped today so there’s that.