Last January I embarked upon what I referred to as a “slow month”. You can read about it here. Essentially it involved making use of what I already have on hand, learning new skills, being creative and very minimal buying. I found it to be a good challenge for me, so much so that I continued a version of it into February and am doing it again this year. I’ve been meaning to blog about it for days now but you know how things go sometimes.

I’m going to try to list what I’ve purchased so far this month since we are about half-way through and then I’ll update again at the end of the month.

We were out of town (New Orleans!) until the 2nd and I didn’t go to the store until the 4th. We celebrated my dad’s and Chris’ birthdays that evening so I bought some items for that. I didn’t write it down and since I always donate my receipts from Apple Market to a local charity I don’t have a record of it. I know I bought crushed pineapple and cherry pie filling for pies. And I can think of a few other items but honestly I just can’t say for sure how much I spent. I think I’m going to just consider my spending for the month from that point. I do have the receipt from Braum’s for that day, though. I bought:

I didn’t buy any other groceries until yesterday when I went to Braum’s again for the following:
Because I’d spent over $15 I got a free loaf of bread.
Total: $23.49

Here is a picture: 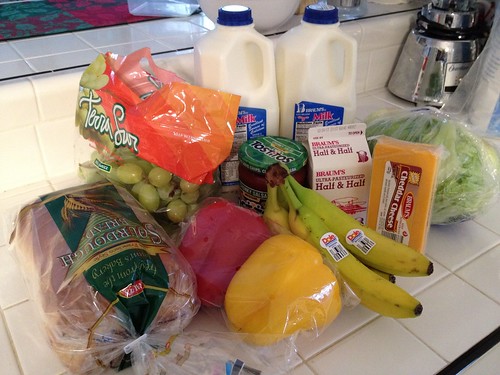 I also picked up my Azure Standard co-op order which included: 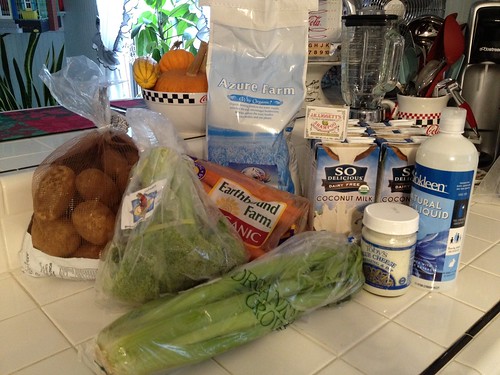 I’m also doing my best to avoid spending money on things other than groceries this month and other than my monthly haircut and a coke I have done well with that.

Tomorrow, if all goes according to plan, I am going to inventory and organize our deep freezer. It is packed to the gills and I really need to see what’s in there. Off the top of my head I know there is a turkey, boneless chicken, pork chops, ground beef, sausage, lots of veggies, and ice cream. Part of the reason for this challenge is to actually eat some of what’s in the freezer. Last night I made chili mac with two cartons of cooked beans I had in the freezer. Tonight I used a package of frozen corn tortillas and Friday’s menu has those pork chops on it.

We are also well-stocked on staples such as flour, sugar, oats, rice, beans, pasta, etc. I’m going to be searching out new recipes using these basics and also learning to make a few things like corn tortillas and bagels or English muffins.

So that’s what’s going on around here. Now it’s time to settle down for the night. We have “Californication” on Netflix DVD to watch (last night it was Downton Abbey – we have rather eclectic tastes) and steaming cups of hot tea to enjoy with it. We actually went to bed at a reasonable hour last night and liked it so much we are going to give it a try again tonight. I want to find out what it’s like to be well-rested – ha! 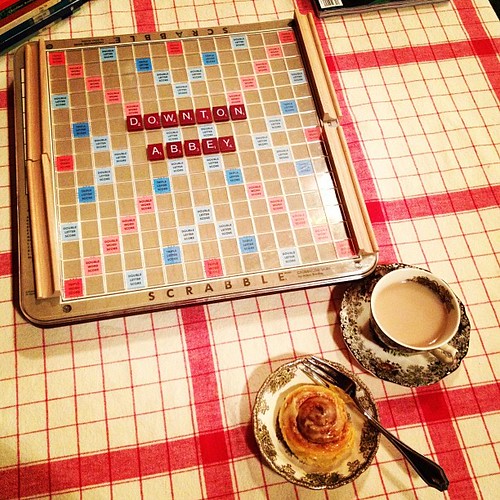 I took this last night just before we started watching Downton Abbey.