Note: We returned from our 11 day trip to New Orleans late last night.  I have lots of stories to tell and pictures to share over the next several days.  Here is the first:

Remember that “101 in 1001” list I made some time ago? Well, one of the items on my list was to try a martini. An honest-to-goodness *real* martini…shaken, not stirred. I wanted to make sure I had one that was properly made by an expert bartender so I decided to wait until I could get one at the Carousel Bar in the Monteleone Hotel in New Orleans. It’s a really cool bar to check out even if you don’t drink. In the center of the room is an antique carousel which has been converted to a bar with barstools around the perimeter and the bartender in the center. It also slowly rotates which is perhaps a questionable feature considering the fact that David has now caught two different patrons who had perhaps imbibed a bit too much and started to trip when exiting the moving portion. However, if you keep your wits about you, it’s rather enjoyable to sip an elegant cocktail and soak up the atmosphere.

Here is a photo of the martini I ordered: 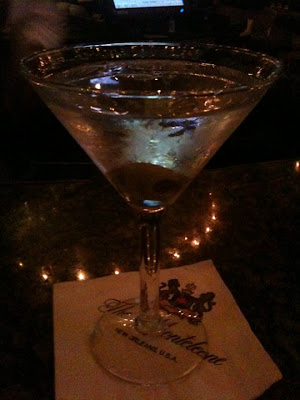 So what did I think of it?  Well, it’s definitely a *grown-up drink*, not sweet or fruity.  I wasn’t sure what I thought at first but it did start to grow on me.  I’d say it’s an acquired taste and it remains to be seen whether it’s one I, personally, will acquire.  But at least I can say I’ve had a martini and cross one more thing off my list.