Look at my tie dye roses! David and I don’t generally do anything elaborate for Valentine’s Day but he does always send me flowers. He actually went in and ordered these three weeks ago since they had a very limited number of them. I think I’ll keep him. 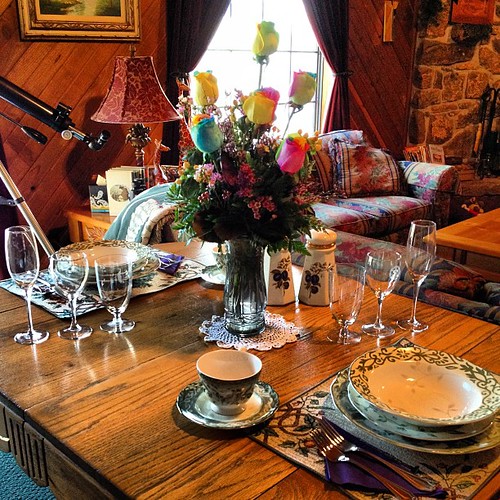 Restaurants tend to be pretty crowded on Valentine’s Day so we decided to eat at home and then go out on Friday (tonight). I went to the butcher shop and had them cut a couple of filets for me which I cooked according to a method I saw on Pinterest. (It’s on my “Food and Wine” board.) That is most definitely the way to cook a steak! We started with salads and then I cooked the steaks. I served them with baked potatoes and corn.

We enjoyed a nice, leisurely meal and then had coffee and some of the chocolates I had bought for David, while watching a few episodes of “Modern Family” via Netflix. Later on, David opened a bottle of champagne and we each had a glass.

It was such a lovely way to spend Valentine’s Day but now I need to finish getting ready because we are going out to dinner and then to hear live music. I’m tired of being a hermit and I *think* most people have already had the crud. I hope!