Once a month my daughter and I go to Norman, the nearest city, to do our  monthly grocery shopping. We refer to it as our “hippie day” because we eat at a restaurant called Pink Elephant Cafe and Tres Cantina and then shop primarily at locally-owned, health food type stores. We also drop off our glass recycling since our town doesn’t offer that option.
Our most recent “hippie day” was last Friday. We started out with a delicious lunch at the above mentioned Pink Elephant, dropped off our recycling and then went to the Homeland grocery store. We don’t generally buy much there other than sustainable seafood and some organic produce if it’s on sale as we prefer locally-owned stores. This time I bought bananas, lettuce, spinach and some English muffins. I didn’t buy any of these gorgeous pumpkins because it’s still a bit too early and too warm for them to last until Halloween but I had to take a picture. 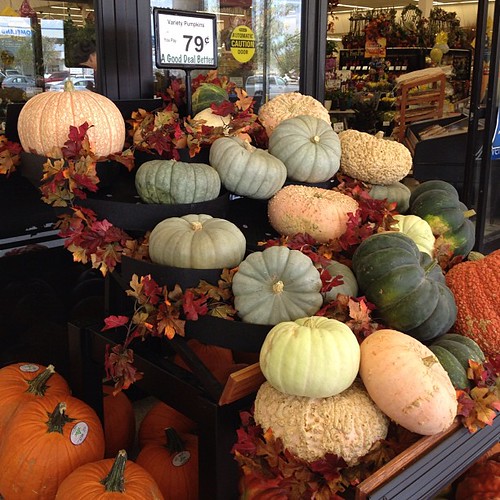 Next up was Dodson’s Health Food and Vitamins. This is generally where we do the bulk of our shopping. They carry a large selection and their prices are good. I love the fact that it’s a locally-owned store and has been in business since 1968.
Natural Grocers was our next stop. It’s a chain but they do have some really good sales and at least it’s a pleasant shopping experience, unlike Walmart. <shudder> I haven’t been to Walmart in over 4 years now and I don’t miss it one little bit.

Our next stop is this quirky little place called The Earth Natural Foods. It’s small and it would be hard to get all your shopping done here but they have local produce, breads and dairy, plus quite a few bulk items. They have a wild-looking garden behind the store and you enter through the back door. It smells like patchouli and they are often playing hippie or meditation music inside. It’s one of those places where you instantly feel at peace. Lisa and I like to joke that these are “our people”. Here’s a picture I took inside: 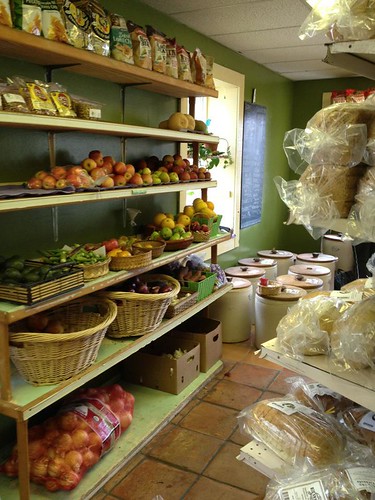 At one point we were battling the traffic on Main Street as the high school was letting out when out of nowhere a guy wearing a motorcycle helmet came running by. I don’t know if he knew these guys but he ran up to this truck which had run out of gas and helped push it down the street and into a parking lot. Just one of those random moments. 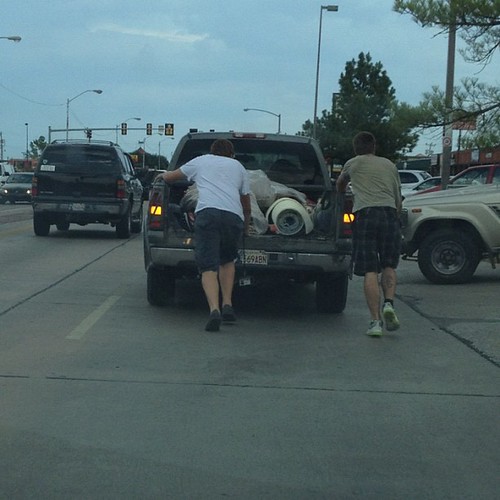 We also went to Forward Foods where I bought some smoked cheddar, pasta from their bulk bins and a baguette.
With the car loaded full of groceries we headed for home, encountering a bit of a dust storm as a cold front whipped through the area. The day had been very hot with temperatures in the triple digits but by the time I got home it had dropped close to 20 degrees.
Here is a picture of my purchases. If you click on it, it will take you to the Flickr page where I’ve tagged each item. What? You mean not everyone is that nosy? 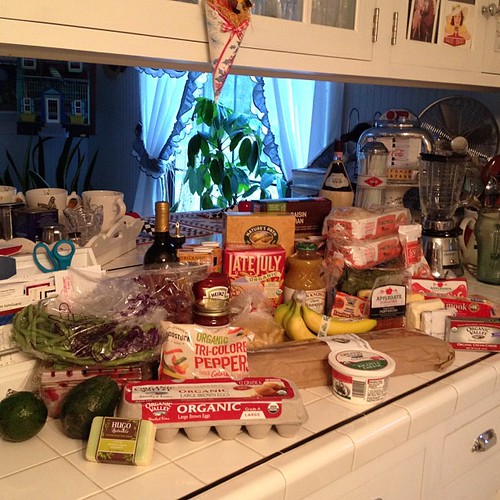 So that was our hippie day. It just so happened that as we were on our way home we started talking about the Amish auction that is held every year in an Amish community about an hour from us. We got to wondering when it was so of course Lisa had to look it up (I taught my kids well – there is no such answer as “I don’t know”). Turns out it was the very next day. What luck! I mentioned it on Twitter and a friend replied that she had been wanting to do that sometime. I invited her to join us and we could not have had a better day.
The weather was spectacular and apparently everyone else thought it was a perfect day for this event. I’ll bet there were at least 10,000 people there. The parking lot looked like Disneyland. If the Disneyland parking lot was a pasture. 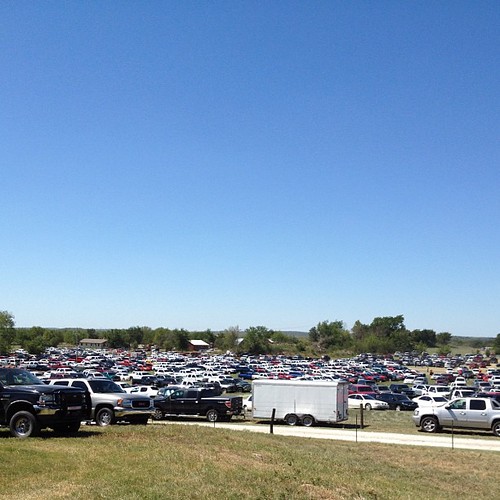 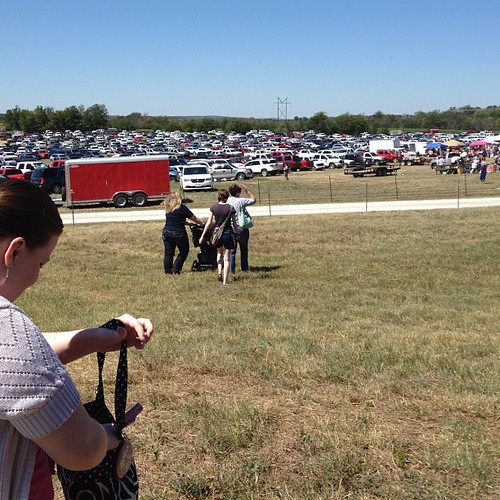 One of the big draws are the gorgeous quilts which are auctioned. I knew they were way out of my price range so I didn’t entertain any notions of actually bidding on one. But it was a pleasure to look at them: 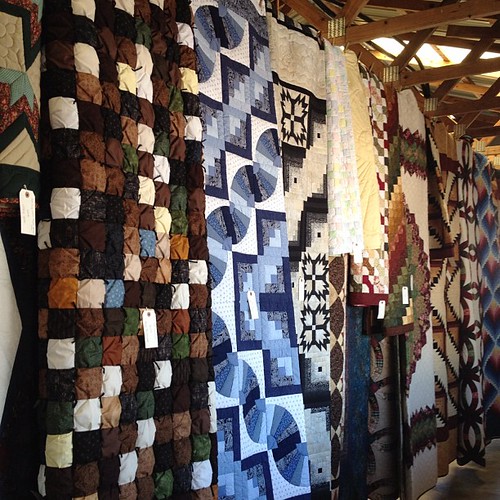 The variety of patterns and colors was stunning. True works of art. 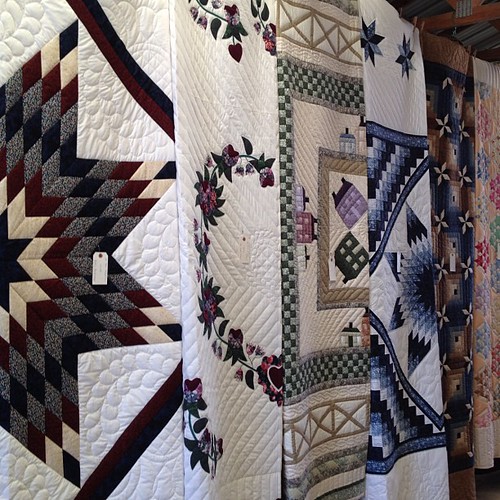 I don’t know if you can see from this picture but the tiny hand stitching is remarkable. 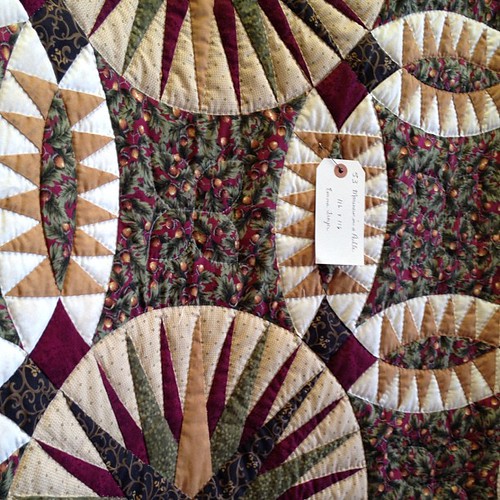 As we browsed other areas we would occasionally hear the final bid on a quilt. One went for $1,799 and the cheapest we heard was around $900. 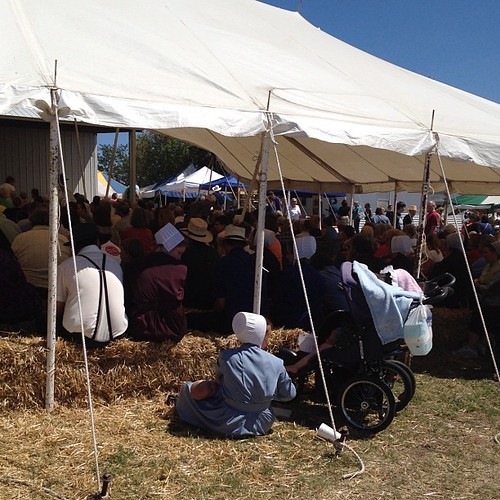 The quilts were out of my price range but the homemade ice cream wasn’t. Only $2 for a nice portion of a sweet and creamy treat. 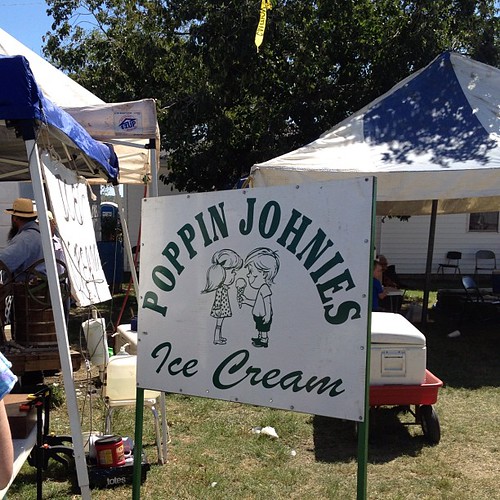 They use a gasoline-powered ice cream churn which was noisy but rather fun to watch. I tried to avoid taking photos with any Amish faces full on but I was facing the sun and could only point in the general direction and hope for the best. Just as I snapped this, the gentleman raised his head. I hope it’s dark enough in the shadows that this wouldn’t be offensive to him if he knew about it. I try to be respectful of other people’s beliefs. 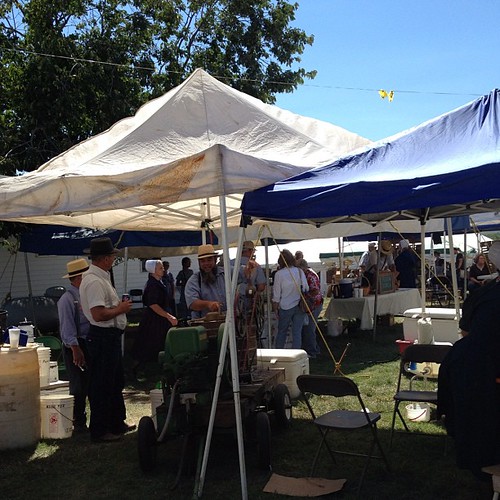 There were countless booths selling everything from antiques to crafts to what would appear to have been an attempt to clean out someone’s closet. I’m partial to quality handmade items so I had to have this kitchen towel: 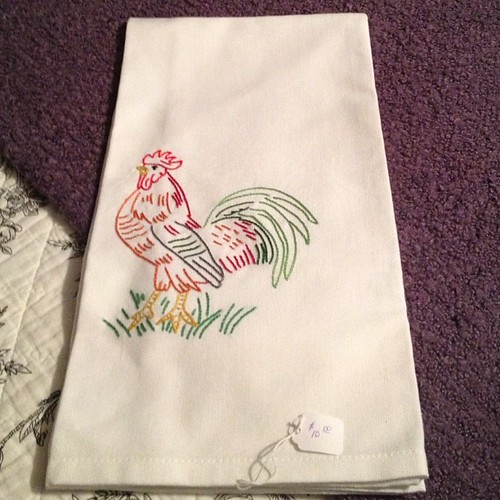 And this pair of pillowcases which will be a sweet addition to our guest room: 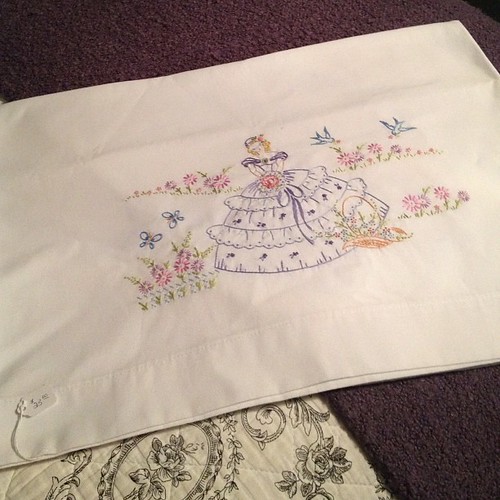 When I was a young girl my grandmother started to teach me and my cousin how to embroider. She bought each of us a little embroidery hoop and taught us a few basic stitches. Neither of us really did any completed projects, though. Seeing these has sparked an interest, though. I love the way women of my grandmother’s generation took simple, functional items and made them beautiful.
After we had browsed to our hearts’ content (and some of us – me, for instance – had enjoyed some amazing chicken and noodles for lunch), we headed for home. We had discovered a slightly shorter route back to the highway but we had spotted something on our way in that we had to have a picture of so we took the longer route. The picture doesn’t do it justice but on this pole out in front of a house, there was this huge catfish head. I don’t know if it was meant to be decorative, boastful or simply to serve as a warning to any catfish that might get a little full of themselves, pull themselves out of the primordial ooze and take a walk down this country lane. In any case, it was definitely unique. 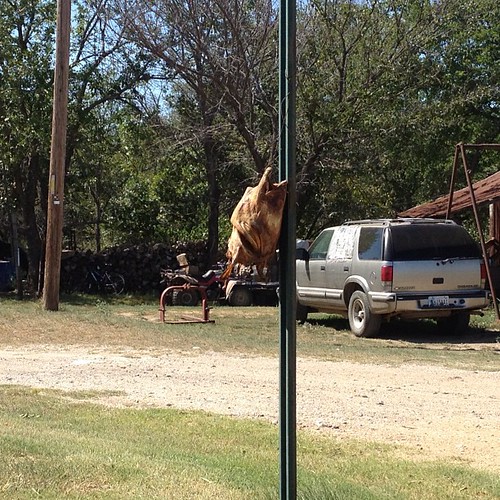 And in totally unrelated but equally important news, Shiloh has a new bed/couch. No, he’s not spoiled. Why do you ask? And don’t forget he has his own Facebook fan page. He’s getting quite a following. 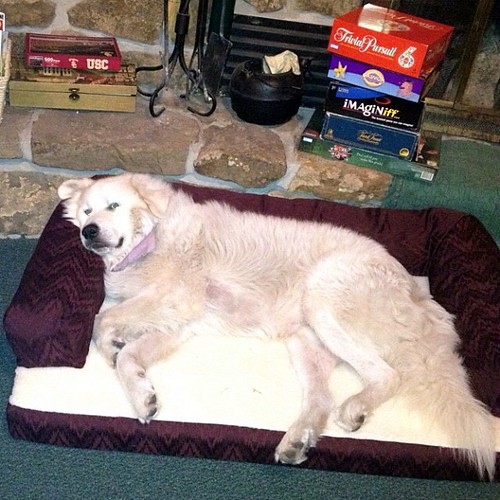 *My daughter also blogged about our “hippie day” which you can read here.