Oklahoma is one heck of a place in the springtime. One minute you can be driving along the highway admiring the dense carpet of wildflowers and the next you are in a deluge dodging tornadoes.

Last Wednesday we went to Oklahoma City for the Clutch/Mastodon concert. We were supposed to meet up with musician friends who had bought tickets for us and we were really looking forward to a fun night together. David needed to take a couple of his employees to the city to pick up their trucks which had been repaired so we left early in the day. After dropping them off we had some time time to kill and then were going to meet our friends for an early dinner. We arrived at the restaurant about 30-45 minutes early, figuring we’d each work on some things via our phones until the others arrived.

We were sitting in the parking lot facing North where the skies looked pretty clear when we got a call from our friends who were visiting someone in the hospital. They were being told that they shouldn’t leave the hospital because of the weather. I turned around and saw rather threatening skies South of us. You see, we were just barely North of Moore, Oklahoma which seems to be a tornado magnet. David decided we needed to get out of there. The concert didn’t start until 7 p.m. so he decided we would go to the Skirvin Hotel, let them valet park the car in their covered parking garage and we would hang out in the bar until the storm passed. It’s a very old (and beautiful) hotel in downtown OKC with lots of other tall buildings around it which makes it safer in a storm.

There were only about half a dozen of us in the bar at that early hour. We were all watching the weather on the television and talking about our plans. The bartender (who, it turns out, grew up in Ada – the little town we live in) told us that if there was a tornado warning for our location we would all evacuate to the basement of the hotel. I asked if we could take our drinks with us and everyone in the bar – all men – chuckled. The bartender said yes. See? You never know unless you ask.

Gradually the bar started filling up. We discovered that quite a number of people who live nearby routinely come to the Skirvin during tornado watches/warnings. We kept a close eye on weather reports while chatting with others in the bar. We always meet the most interesting people in that bar. I was sitting next to a man who is an artist and works for the Choctaws, which happens to be the tribe I belong to. He told us about the new concert venue the tribe had just built and the next thing I know David has bought tickets to see Boston there on my birthday in August. And I have a new Facebook friend.

At one point we were evacuated to the basement but almost as soon as we got there they gave us the all clear and we returned to the bar. Later in the evening we made a second trip down there – that time for perhaps 15 minutes or so. It was all very orderly and civilized. They had cases of bottled water down there for anyone who wanted it, although most of us brought our own beverages. We chatted with a guy we have seen at the Skirvin quite often. He lives in the neighborhood and apparently hangs out there all the time. As soon as were told to go to the basement he bought three beers, had them open two, and calmly proceeded down the stairs where he promptly downed the two that were open. David opened the third for him with a key – and thereby taught the guy a new skill.

At some point it became apparent the we were not going to the concert. The venue is little more than a metal building in an open field. Not exactly where one wants to be in a tornado. We tried to dissuade our young friends from going but without success. They saw the warmup band but then the power went out. Because a tornado hit a block away!!! We were worried sick about them. When the rest of the concert was cancelled they headed for home which took them a very, very long time because of the torrential rains and flooding.

Oh, did I not mention the flooding? Yes, while California is drying up and is about to blow away, Oklahoma has been issuing emergency flood warnings. They even closed the airport which got over 7 inches of rain that night.

David decided that we shouldn’t try to drive home so he went to the front desk to see about getting a room. The regular rates were crazy high that night but he’s a Diamond Club member with Hilton and asked what sort of rate he could get under the circumstances. They knocked $100 off the rate and gave us a suite. Sweet! As they say, membership has its privileges.

So, with a room for the night secured and after knowing that our friends were safely on their way home and away from the dangerous storms, we settled in to enjoy the rest of the evening. There had been a couple of earthquakes in the state earlier in the day, plus the tornadoes and flooding. One would think that would be enough for one day. But one would be wrong. Reports started coming in that an exotic animal park had been damaged and there were wild animals roaming the streets of Tuttle, Oklahoma. Soon my Facebook and Twitter feeds were filled with references to “Tigernado” and some clever person quickly started the “Tornado Tiger” Twitter account.  It was later determined that, while the exotic animal park did sustain major damage, all the animals were accounted for. Still, it was rather surreal to think that on top of the crazy storm, tornadoes and flooding there might be tigers roaming the streets. Or maybe swimming in them:

After things settled down we went to our room. Of course, we hadn’t planned on spending the night so we had no luggage. We asked for toothbrushes at the front desk and they gave us a nice little selection of toiletries – toothbrushes (really nice ones), toothpaste, comb, deodorant (one for each of us). Fortunately I carry a couple of days’ worth of my asthma and blood pressure meds with me and enough makeup that I can at least look reasonably decent.

We carried our last drinks with us to our room and then ordered some poutine from room service. We had split a burger at the bar early in the evening when we still thought we would be going to the concert and then doing the usual post-concert IHOP thing. As we sat in bed eating and watching Jimmy Fallon, I was very grateful that we were safe in the nicest tornado shelter ever. 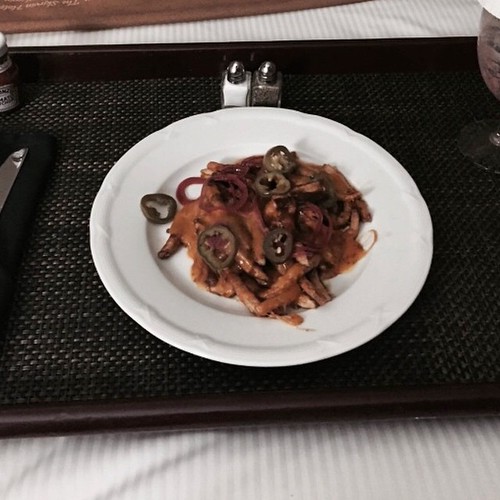 We slept well and got up early the next morning because David needed to go to work. One thing about having to be up early is that we actually got to partake of the free breakfast the hotel offers its Diamond Members. We’ve never been up early enough to do that before. They have a very nice breakfast buffet. Maybe we will have to drag ourselves out of bed in time to do that again next time we stay there.  Or maybe not.

So, while our night didn’t quite go according to plan, and sadly, there was much property damage, several injuries and one death, we were lucky. Oklahoma is beautiful in the springtime but it can be one wild and weird place.

Sometimes people even find a stray camel in their backyard:

This camel and his 4 cow friends went for a stroll when their fence was knocked down in the storm.
Word spread quickly on Facebook and they were soon back where they belong.

It continued to rain pretty consistently the next several days and the flooding has been rather serious. It almost never floods in our town but we’ve had flash flood warnings several times in the past few days. All I can say is, so far the locusts haven’t been unleashed.