I still have so much to share from our Paris trip and I fully intend to finish this series within a couple of weeks of the start of 2015. For now, how about a quick post about our little excursion to London?
David had the brilliant idea that we should take advantage of proximity and zip on over to London during our trip. He knew that I’ve long wished for an opportunity to meet my dear friend, Mary, in person. She and I began corresponding via email about 13 years ago. We “met” on an email list for FlyLady followers. One day she asked for clarification of an American term. I responded and also mentioned that her name was the same as my mom’s maiden name. It seems such a simple and innocuous beginning for what has become a deep and lasting friendship.
Mid-way through our Paris trip we caught the train to London. The train trip alone was quite an adventure. I’d love to travel Europe via train someday. We met up with Mary near our hotel. She spotted us from a distance and the three of us embraced right there on the sidewalk. It immediately felt as though we’d all known each other forever. Over the years David has heard me talk about Mary so much that he already felt as though he knew her, too.
It was a gorgeous, unseasonably warm and sunny day. We had decided that it would be a good idea to hop a tour bus for an overview of the city. We had done that in Paris and it was wonderful. Well, we didn’t do so well selecting a tour bus company in London. I’ll spare you the details but if you are ever planning to take a trip to London let me know and I’ll tell you which company to avoid.
Still, it was absolutely splendid to spend the day with Mary:

She caught a train back to Birmingham, where she lives, at about 10:30 p.m. and we said our goodbyes in the train station. I truly hope I will get another opportunity to see my dear friend. Maybe someday she can come visit me!
David and I headed back to our hotel which was only a few blocks from the train station. We had, however, walked our ever-lovin’ legs off that day. That tour bus thing? Yeah, it didn’t work out quite like we planned. Anyway, back at the hotel I had already taken off my boots when I was overcome with a desire – no…NEED – for a cup of hot tea. It was after 11 p.m. and room service was closed for the night. They had a bar downstairs and I took a chance that they might be able to fix me up. I pulled my boots back on and trudged downstairs in search of a fix for my addiction. I should have known that it wouldn’t be a problem in England. This is what the bartender fixed up for me to take back to our room: 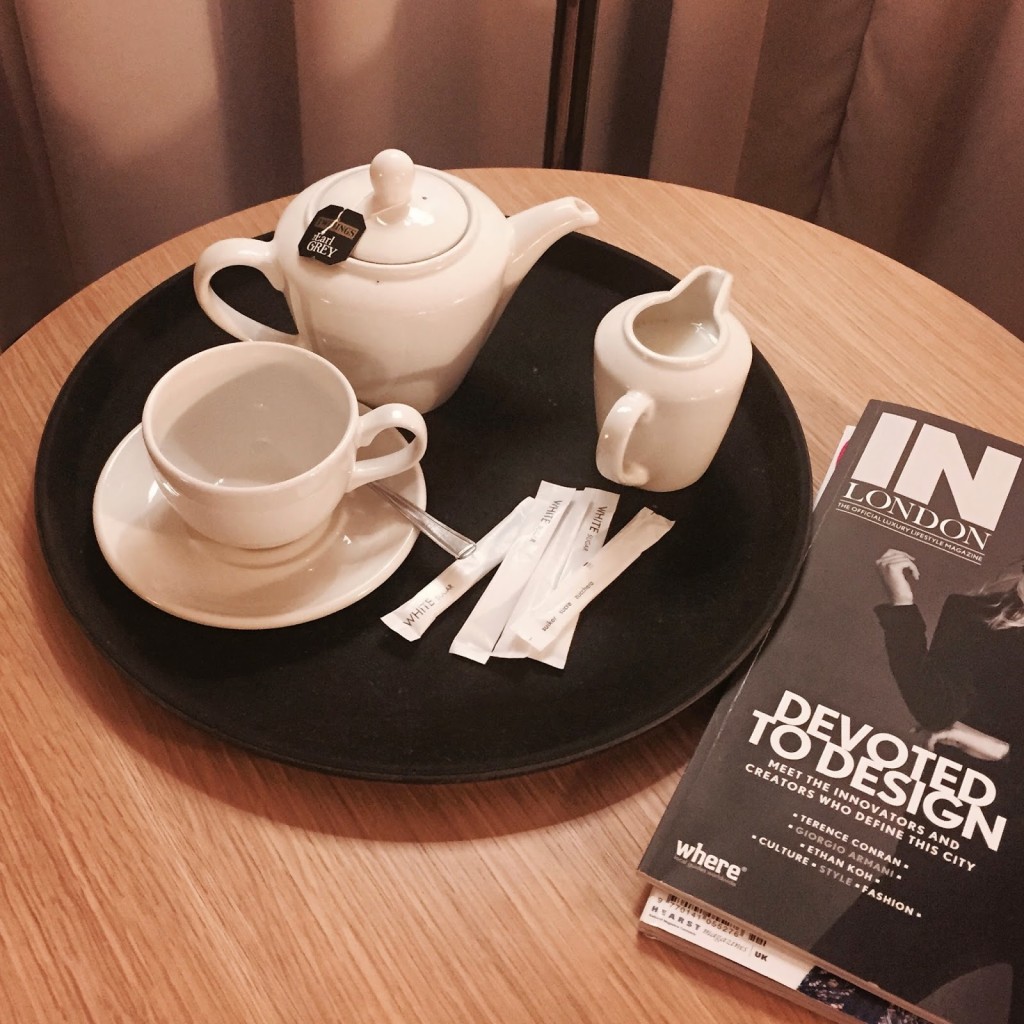 My opinion of London shot up dramatically at that point. We had endured crowds, traffic, incompetent bus drivers and the worst food imaginable but a perfect cup of tea fixes nearly anything.
We slept well in a very comfortable hotel room and awoke ready to give London another shot. The weather was more typical – cool and rainy – but we had a better idea how to get around and we had a lovely day. We decided to focus on the two main things we wanted to see. I wanted to see the Globe Theatre and David wanted to see Buckingham Palace:

We saw the Globe first. We didn’t get to go inside but we did pick up a couple of things in the gift shop and enjoyed a nice lunch there. Finally…a decent meal. Not quite Paris but then, nothing is. Still, we had a tasty shepherd’s pie in a lovely little restaurant.
We made our way to Buckingham Palace, enjoying a walk through a pretty park. The palace was quite impressive from the outside which is all we saw. That’s right, the Queen didn’t invite us in for tea. Can you believe that? And we know she was home because literally two minutes after we decided to catch a cab across the street the cab driver pointed out that we had just missed the Queen. If we had waited outside the gate just two more minutes…
Ah, well…that’s how things go sometimes. It was time to head back to the train station and back to Paris. I’m really glad we took the time to go to London, most especially because I got to see Mary, but we were both more than ready to go back to Paris.
Here are a few more pictures from London:

The Tower of London

One of their charming red phone booths