I think we’ve just about got this weekend thing figured out. You should be exhausted by Sunday night, right?

David had one heck of a week at work and was more than ready for Friday night. We went to the Statesman Lounge to hear Mandala perform and to reveal the gender of her baby due in January. They made a game out of it:

At 11 p.m. the proud daddy-to-be brought in bags of balloons to announce the gender:

I had guessed correctly but I hadn’t expected this: 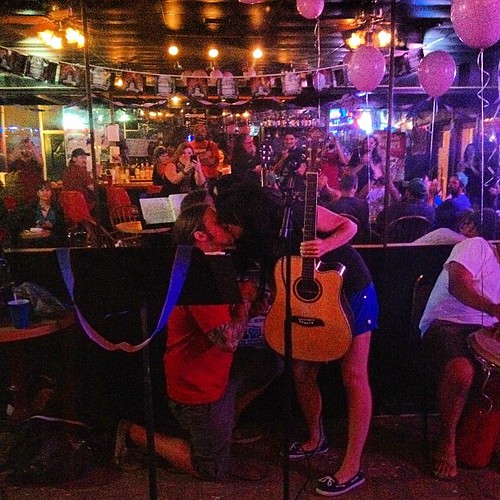 He proposed to her and gave her a beautiful ring. It was so sweet and I’m delighted that we were there to see it. They are such a wonderful couple and will be amazing parents.
On Saturday we did some house cleaning and I managed a nap in preparation for Saturday night. We had not one, but two events to attend. Our niece, Leslie, came up from Dallas to join us. We dropped her off at one venue and we headed to the Statesman Lounge again. This time to hear Rowdy Folk.
Sep 8, 2013 | Rowdy Folk – Wagon Wheel by deannapiercy on Keek.com
We stayed until about 11 and then headed to the North Lounge for the “Back 2 School Dance Party”. Chris was one of the DJs.

Despite being the only “old” folks there we had an absolutely stellar time. We joined the after party for a little while: 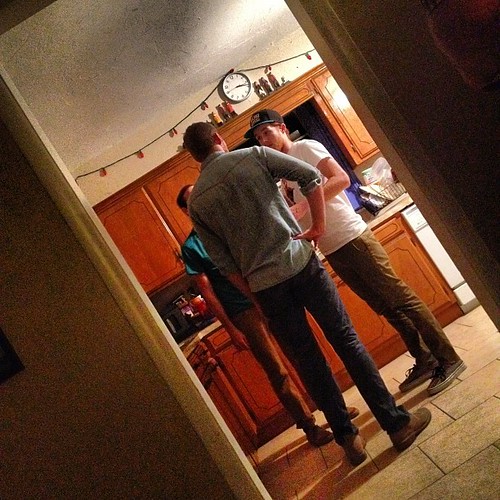 …and then dragged our tired bodies home around 3:30 or 4 a.m.
Our niece spent the night, along with her sweet dog, Toby. Toby and Shiloh, the “cousin dogs” adore each other and had a great time romping together.
At 2 p.m. today we had a meeting of the “Secret Breakfast Club” at Prairie Kitchen for a (very) late breakfast. I think there were 13 or 14 of us, including the adorable 4 year old son of Aaron and Lindsay (aka Rowdy Folk). He kept us all entertained. 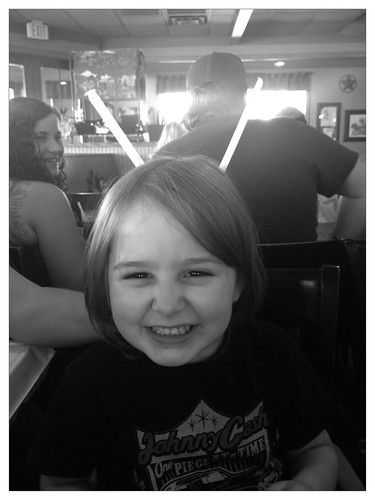 Actually, the antennae were Kadi’s idea. I think they are both rather cute:

Following a rather lengthy “breakfast”, tummy stuffed with biscuits and gravy, I was more than ready for a nap. In fact, that point was made abundantly clear when I realized I was waiting for the light to change…at a stop sign.
David and I slept for a couple of hours and then he had to go do some paperwork at his office. He’s bringing home something for a late dinner and if we aren’t too tired we may watch “The Great Gatsby” which I’ve been dying to see. A member of our “breakfast club” let me borrow her copy today and I hope we can stay awake for it tonight, otherwise we’ll have to wait until next weekend since David will be out of town all week.
So that wraps up another fun-filled weekend for the Piercys. So far I don’t think we have anything planned for next weekend but I suspect that will change.